There are plenty of enticing unknowns to look forward to, as ARRC shapes up for Round 5 of the six round series. Close racing in the three classes is a given at any circuit, but there are extra factors at play to create still more competitive uncertainty at Sentul and thrill spectators in the expected packed grandstands.

The surface at the 25-year-old circuit has played a leading role for many years, too often for the wrong reasons. A crumbling, patched-up topping was not only hazardous, but gave an extra home advantage to Indonesian teams and riders who understood far better than annual visitors how to optimise machine set-up and ride around the worst bits of the surface.

Now there is new asphalt and a positive reason to talk about the surface, which will have, literally, levelled the playing field for home and visiting riders. Early anecdotal comments predictably describe the surface as abrasive, so there are challenges in store for teams and tyre supplier, Dunlop, that will change as rubber gets laid down between Friday morning and Sunday afternoon.

Nobody understands the ups and downs of motorcycle racing better than Anthony West. The gifted Australian has spent close to two decades at the top levels of the sport, fighting for funding and support all the way and, more often than not, rewarding his fans with a mixture of brilliance, intelligent race-craft and pure Aussie grit.

West left Round 4 in India with a commanding 51 point championship lead over 2017 title-holder, Azlan Shah Kamaruzaman, thanks to four wins, a second and a third from six out of seven possible starts. That means that, even if Azlan takes a double win at Sentul, West will still lead the series by one point.

His absence from Round 5 is due to a provisional suspension of his FIM licence following an “adverse analytical finding” in an anti-doping test on 8th July at the Misano World Superbike round.

What is strange about the case is that West was told at the time of the test that he would be verbally notified of any positive test result within two weeks and that there would be no notification of a negative test result. There was no notification, so the team proceeded to Portugal, following the summer break, for the next round at Portimao in mid-September. Then, on Thursday 13th September, one day before the start of free practice, the FIM informed the team of the “adverse analytical finding” from the sample taken two months previously and provisionally suspended his licence with immediate effect.

The FIM Anti-Doping Department was informed of the adverse finding on July 30th by the testing facility in Germany and the FIM Medical Director notified the FIM Legal Department Director on August 24th. The FIM Legal Department then waited almost another three weeks to notify the rider and impose the provisional suspension of his licence. Whatever the eventual findings of the case turn out to be, the FIM is clearly in breach of its own code and West has been left with no choice but to sit it out. In a court of law, such a procedural bungling would most likely result in the case being dismissed and a counter-claim for damages, as the team were left with no chance to find a replacement rider.

The upshot is that the 2018 ARRC Supersport Championship has been blown wide open. Manual Tech KYT’s Azlan has 85 points, nine more than third-placed Yuki Ito. Fourth is Tomoyoshi Koyama on 66, who has five more riders within 10 points of him, all of whom are podium contenders: Zaqwan Zaidi, Ratthapong Wilairot, Keminth Kubo, Ahmad Yudhistira and Taiga Hada. Yamaha Thailand’s former champion, Decha Kraisart, won a chaotic, wet Race 2 at the Indonesian round last year and can never be counted out of contention.

A new group of riders that has emerged in the current season will be making their presences felt too, including Astra Honda’s in-form Indonesian, Andi Farid Izdihar, and Malaysians, Azroy Hakeem Anuar, who has leapt impressively into the premier class from AUnderbones in 2018 and Hong Leong Yamaha’s Kasma Daniel Kasmayudin and Ramdan Rosli.

With five wins and only one DNF among his eight starts in 2018, the main reason that Astra Honda’s Rheza Danica Ahrens is not running free and clear in the Asia Production 250cc championship chase with 148 points is the performance of his team-mate, ‘Super’ Mario Suryo Aji. The 15-year-old has five second places and a third among his seven finishes and sits 26 points behind with four races remaining. Yamaha Thailand’s Anuparb Sarmoon, on 108 points, is the only other rider within realistic reach of Rheza.

There are another four riders capable of mounting the top-step of the podium in this closely fought class. Three are Indonesians, Rafid Topan Sucipto, Andy Fadly and Reynaldo ‘Rey’ Chrisantho Ratukore. The fourth is AP Honda Racing Thailand’s Muklada Sarapuech returns after missing the Indian round with the hand injury she sustained in her horror crash with team-mate, Kritchaporn Kaewsonthi, at Suzuka.

In addition, four Indonesian wildcard riders will be looking to make a mark, while ARRC fans in Vietnam, Taiwan and India will be watching out for Cao Viet Nam, Chiou Ke Lung and Idemitsu Honda’s Racing India’s pairing, Sethu Rajiv and Anish Shetty, who are assured of huge support from home as the action gets underway.

There is a lot of pride at stake in Underbone 150s, as Indonesian riders aim to overturn what has been Malaysian dominance during the first four rounds of 2018. Malaysia’s Helmi Azman leads the way with 134 points, from Izzat Zaidi on 111, while Ahmad Fazli Sham has 88, thanks largely to the 36-year-old’s double win in India.

2016 champion, Wahyu Aji Trilaksana, who has struggled with infringement penalties and inconsistency this season, is the sole Indonesian in the top six, with 81 points. Former double champion, Gupita Kresna, struggled on his return to the series, before hitting his stride at Suzuka in Round 3. He was unfortunate to miss the Indian round because of visa issues that prevented his Yamaha Yamalube SND team from participating. In addition to Gupita’s regular team-mate, Syahrul Amin, the team will be running one of the six Indonesian wildcards, Wawan Wello. 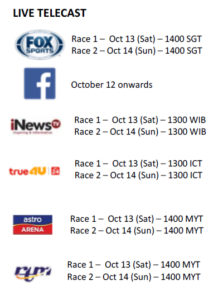 Helmi also leads a three-rider line-up for SCK Rapido Hi Rev Honda, with Fakhrusy Syakirin Rostam and talented 14-year-old Australian, Travis Hall, who scored his first podium in the series in Race 2 in India. Then there is UMA Racing Yamaha, whose regular duo of 2017 champion, Akid Aziz and Haziq Fairues are joined this time by Ilaham Elsan Effendi.

The talented Peerapong Luiboonpeng lines up again with Affendi Rosli, as the class’s lone Thai rider, while Miu Nakahara will be keeping Japanese interest high on the United Oil M-Mate Yamaha.

Sentul will wake up to the bark of Underbones at 08:15 local time on Friday. All the action will be streamed live on Facebook, while races will also go out on TV on Saturday and Sunday.