Rain forecast for Saturday afternoon failed to turn up, leaving Suzuka Circuit alone to challenge ARRC’s teams and riders as Saturday qualifying and races went ahead exactly on schedule. There were surprise results in all classes and two new championship leaders by the time the fourth and final chequered flag flapped at the ASB 1000 finishers.

Yamaha Racing ASEAN’s Broc Parkes had to overcome Suzuka Circuit itself as well as his rivals to win ASB 1000 race one today.

The Australian had crashed in the morning at the long, left hand Spoon curve while on a fast qualifying lap, wrecking his R1 and leaving him fourth on the starting grid behind Zaqhwan Zaidi, Ratthapong Wilairot and Apiwat Wongthananon. The team got his bike ready minutes before pit lane opened for the sighting lap.

Parkes got away well for the 11 lap race from row two, slotting into second place behind Zaqhwan and just ahead of Apiwat and Azlan Shah, as Ratthapong slipped back from his front row starting position. As Apiwat moved up to challenge for second on lap three, Parkes appeared to find a false neutral under braking the Spoon and ran wide to drop back, way behind Apiwat and Azlan.

Zaqhwan, riding at his imperious best, initially withstood the pressure from Azlan and Apiwat, but as Broc Parkes clambered back up into contention, it was the Asia Dream Honda rider’s turn to make a mistake and he dropped back to fourth, handing the lead to Azlan, whose BMW was beginning to slide on the soft compound Dunlops he had selected against the medium-hard consensus.

In what was the move of the race, Parkes followed Azlan through the final chicane, got the power down perfectly on the exit and went around the outside of the Malaysian as they came onto the home straight. After briefly regaining the lead, Azlan was passed once again by Broc, who this time put in two fast laps to make his lead unassailable. Behind the front four Suzuka first timer, Bryan Staring, battled with Yuki Ito for fifth.

Meanwhile, Zaqhwan made his own recovery to come back through to second, three seconds behind Broc at the end, from Azlan and Apiwat. Bryan kept himself just ahead of Ito to claim fifth, while Ratthapong was almost eight seconds further back in seventh in front of Bastien Mackels who, in eighth position, was the best of the wildcards.

Broc’s win extends his championship points tally to 130, a lead of 17 over Azlan, who remains second ahead of Zaqhwan.

AKENOSPEED Yamaha’s Soichiro Minamimoto carried an excellent free practice and qualifying performance through to a convincing win in Supersport 600 race one. In doing so, he denied Yamaha Thailand’s Peerapong Boonlert the chance to equal the all time class record for seven consecutive wins.

The Japanese wildcard, who had squeezed Peerapong Boonlert out to the middle of row one in morning qualifying, had a poor start and watched from behind as the championship leader got away with Hong Leong Yamaha’s Kasma Daniel Kasmayuddin at the front. Musashi Boon Siew Honda’s Azroy Hakeem Anuar clashed and crashed with MOTOBUM Honda’s Arakawa first time around at turn one; both riders were unhurt.

By lap five of ten Peerapong was having trouble holding his lines on Suzuka’s long turns. As Kasma sensed the opportunity and turned up the heat, Minamimoto closed in to join the battle for the win. Kasma was first past the Thai Yamaha R6, closely followed by the Japanese. Minamimoto took the lead on the penultimate lap and immediately put some clean air between himself and Kasma, while Peerapong settled for third on his unusually unruly Yamaha.

Fadly out of reach in race one 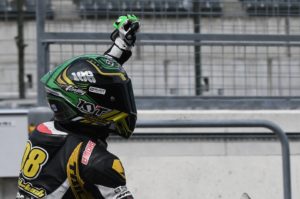 Despite carrying a 500rpm ‘equaliser’ cut in his rev limit, Andy Fadly continued the form he showed since arriving at Suzuka by leading from the first turn in race one and getting clear with a pace that the rest of the ARRC AP250 field couldn’t get anywhere near.

However, the Manual Tech KYT Kawasaki rider didn’t have it all his own way in qualifying, ending up second after a fierce three-way fight with Rafid Topan Sucipto and Irfan Ardiansyah. Sporting his new team’s livery and a change of race number to 911, Topan claimed pole position from Fadly by 31 hundredths of a second by taking his Bike Corner SYS KYT Honda around Suzuka’s 5.8 kilometres in 2’28.714 to edge Fadly out to second. Irfan, who had led much of the 30-minute session, qualified third on 2’29.685. Manual Tech KYT Kawasaki’s Aiki Iyoshi crashed at the beginning of qualifying and lined up last on the grid.

Rafid launched well from the start, but Fadly got the better of him into turn one broke away at the front. Behind him Muklada fought with a group of five Indonesian riders, who did their best to keep her at bay. All three Astra Honda riders took turns at the front, though it was Irfan who looked the most convincing contender for second place. ONEXOX TKKR SAG’s Rey Ratukore, the sole Yamaha rider in the front group, looked increasingly threatening on the break at the final chicane.

Clearly fighting handling problems, Muklada did her best to get to the front of the group, but, as the last lap unwound, was unable to get herself into a podium position. As Fadly cruised over the line 2.6 seconds ahead, Irfan put enough distance between himself and the others to claim second without a serious challenge, while Ratukore got the better of Awhin, Muklada and Lucky to cross the line third. Rafid Topan came through in seventh from Piyawat Patoomyos, Faerozi and Sasaki, who completed the top ten.

Underbone 150: Gupita blasts through at Suzuka 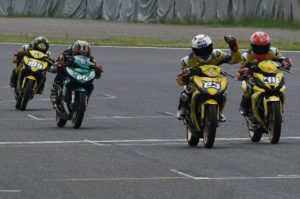 SND Factory Racing’s Gupita Kresna made up for a poor qualifying performance, which saw him start from 22nd position on the grid, to take a brilliantly judged win in Underbone 150 race one which saw almost half the riders who started lead the race at some point.

In the morning’s Superpole contest, Akid Aziz, Friday’s fastest qualifier, confirmed his provisional pole position with a near perfect lap of 2’39.065 ahead of Peerapong Luiboonpeng and Wahyu Nugroho. Wahyu Aji Trilaksana broke down on his superpole lap and started 15th. 13 year-old Gun Mie impressed by qualifying ninth.

As the leaders fanned out at the final chicane, Gupita placed himself perfectly to get ahead of team-mate, Wawan and Wahyu Aji to add another win at Suzuka to his resume.