The combination of Azlan Shah Kamaruzaman and the sheer power of the ONEXOX TKKR SAG BMW were too much for the rest of the field during today’s free practice sessions for ARRC round three at Chang International Circuit, in Buriram, Thailand. The Malaysian brought his times down progressively through the day to end up with a best lap of 1:35.518 to leave himself more than seven tenths of a second clear at the top. Next up was Honda Dream Asia Racing’s Zaqhwan Zaidi who clocked 1:36.274, despite a heavy crash on his outlap in FP3. The former two-times ARRC champion was unhurt.

Next up was Yamaha Thailand’s Apiwat Wongthananon on 1:36.416, just ahead of the best of this weekend’s Chang International newbies, Broc Parkes, who goes into round three at the top of the standings. Ahmad Yudhistira was fifth, in front of Yuki Ito and Ratthapong Wilairot, who was the last rider below the 1:37 threshold. Kawasaki Thailand’s pairing of Bryan Staring (in again for the injured Thitipong Warakorn) and Chaiwichit Nisakul were eighth and ninth on 1:37, while TJ Alberto rounded out the top ten. Full results here. 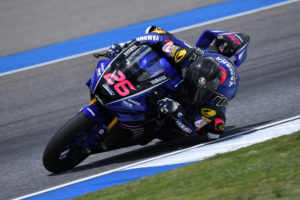 Supersport 600: Peerapong keeps it pinned on day one

Peerapong Boonlert dealt with the pressure of going into his home round with four wins from four ARRC starts in 2019 behind him by topping the timesheets in today’s free practice session with a time of 1:40.212.

As widely expected, Hong Leong’s Kasma Daniel Kasmayudin and Adam Norrodin, returning from CEV Moto2 duty, led the chase behind the Thai championship leader. Kasma was closest, on 1:40.345, with Adam six tenths further back in third on the day’s combined times. 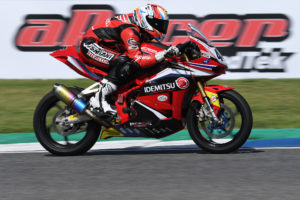 AP250: Muklada puts a marker down in free practice

AP Honda Racing Thailand’s Muklada Sarapuech took the fight to her ARRC title rivals today in free practice, finishing the day with a best time of 1:53.138, a full half second ahead of team-mate, Piyawat Patoomyos, who finished second. Andy Fadly was next best, despite his 500rpm handicap, with a 1:53.724, which was a few hundredths quicker than the third AP Honda, of Tatchakorn Buasri and Faerozi Toreqottullah, who was the fastest Yamaha. Aiki Iyoshi, carrying a similar handicap to his Manual Tech KYT Kawasaki team-mate, managed 1:53.994, while the three Astra Hondas of Irfan Ardiansyah, Lucky Hendriansia and Awhin Sanjaya formed an orderly line in seventh, eighth and ninth, all within one tenth of each other. Yamaha Thailand’s class rookie, Suttipat Patchaeetron, did well to finish up tenth. Full results here. 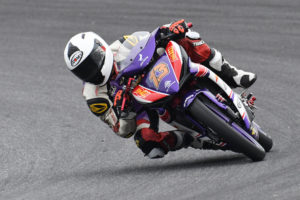 The underbones had two free practice sessions and qualifying, as normal for an ARRC Friday, with the usual suspects – more than half the 30-bike field – lapping in the 2:00s and 2:01s.

That was until UMA Racing Yamaha’s Akid Aziz decided to take a dip under the two minute mark and lower the lap record in the process to 1:59.972, which is 0.024s under the previous lap record. 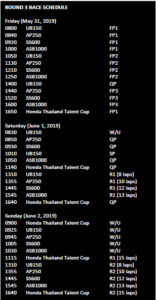 Although Hafiza Rofa top combined free practice with 2:00.127, the closest anyone could get to Akid in qualifying was Ariff Musa, who was eight tenths back from the 2017 champion. Richard Taroreh was third, just two thousandths slower than Ariff, on 2:00.732, while the Team for All pairing of Peerapong Luiboonpeng and Affendi Rosli were fourth and fifth.

The fastest 15 will fight out grid positions for the first five rows in tomorrow’s Superpole shootout. Full results here. 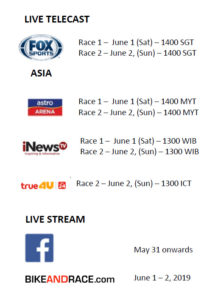