Yamaha Thailand’s Apiwat Wongthananon got the best launch from the middle of the front row to lead poleman Azlan through the first lap, from Zaqhwan, who led the four Yamahas of Yuki Ito, Ahmad Yudhistira, Ratthapong Wilairot and the two Kawasakis of Bryan Staring and Chaiwichit Nisakul. TJ Alberto, on the Access Plus Ducati Panigale, headed the rest of the field.

At mid distance the two leaders got around one second clear, only for Zaqhwan to close them back down, bringing Broc Parkes and Yuki Ito with him.

There was little to choose between the Malaysian and the Thai at the front, until Apiwat ran wide at turn 12 at the end of lap nine, falling back to fifth, before mounting a recovery.

Zaqhwan made a bid to catch the green BMW, as Parkes and Ito got into a squabble with Apiwat. At the end Azlan swept to his second win of the season six tenths clear of compatriot, Zaqhwan, while Apiwat got in front of Ito, then Parkes, to take third. Three-and-a-half seconds further back, Ratthapong came through to sixth, ahead of Staring and Yudhistira. TJ came through to ninth ahead of Farid Badrul on the second ONEXOX TKKR SAG BMW, Kazuma Tsuda and Jonathan Serrapica. Full results here. 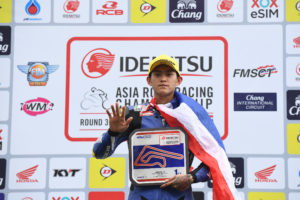 Peerapong Boonlert did more than merely shrug off the pressure of extending his perfect start to 2019 at his home circuit in Buriram today. Yamaha Thailand’s newest star recorded a lap of 1:39.294 to take his first pole position of the season in the morning qualifying session and then went on to win Supersport race one by seven seconds.

In qualifying, Hong Leong Yamaha’s Kasma Daniel Kasmayudin was the best of the rest, albeit 0.576 slower than Peerapong. Astra Honda’s Andi Farid Izdihar completed the front row, just a whisker quicker than Adam Norrodin and Ramdan Rosli. Kritchaporn Kaewsonthi completed the second row thanks to a lap of 1:40.877.

Peerapong got a perfect launch from pole and had stretched out a lead of around four bike lengths by the time the field arrived at turn three on the opening lap. Kasma and Rosli gave chase and piled the pressure on the championship leader, with both Malaysians getting through at the start of lap three. 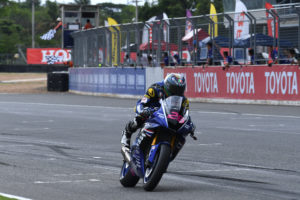 Peerapong took a good look at his rivals, before dispatching ONEXOX TKKR SAG’s Rosli back to third and then re-taking the lead on lap four. Rosli slipped back into the clutches of Andi Farid, while Adam Norrodin, Azroy Afif and Passawit spread out behind them. Andi converted pressure into provisional podium on lap seven out of 12.

At three-quarters race distance, Peerapong’s advantage stood at 0.6s, while Kasma was another 2.3 seconds clear of Andi in third, who was having to deal with the ambitions of Rosli and Adam.

A mistake by Kasma saw him go wide at the final turn on lap ten, putting him in the cross-hairs of Adam, Rosli and Andi. The scrap allowed the race leader to get clean away.

With Peerapong crossing the line with a seven second winning margin, Adam triumphed in the scrap behind to finish second, while Rosli pushed Kasma back to fourth ahead of Andi and Azroy. Passawit and Afif were a further eight seconds back in seventh and eighth, just in front of Helmi Azman and Rheza Danica Ahrens, who completed the top ten. Full results here. 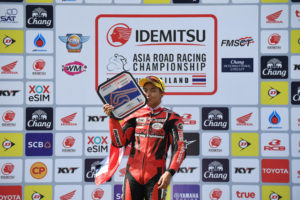 While pole position and a lights-to-flag win sounds like it was easy, AP Honda’s Muklada Sarapuech had a fight on her hands during Saturday morning’s 30-minute qualifying session at Chang International Circuit.

Astra Honda’s Irfan Ardiansiyah led part of the session until Muklada, after pausing in the AP Honda garage, came out and skimmed eight thousandths from the Indonesian’s best time, with a lap of 1:52.805. Tatchakorn Buasri was another few hundredths back and completed the front row, leaving the two rev-handicapped Manual Tech KYT Kawasakis of Andy Fadly and Aiki Iyoshi on row 2, separated by Piyawat Patoomyos. 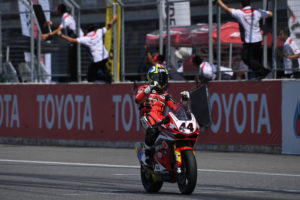 When the lights went out, the AP Hondas of Muklada and Tatchakorn seemed to catch the rest of the field napping at the start, opening an early gap that Fadly, in third, was unable to make up. He soon found himself passed by Astra Honda’s Irfan and Piyawat, before he regrouped to head up the chase to the leading Hondas. By the start of lap five, Muklada had a gap of one second over Tatchakorn, who had a similar gap back to a six-way duel headed by Irfan and Fadly. A tangle in the group between Piyawat and Iyoshi caught the eye of race control, who ordered the pair to report after the race. Iyoshi crashed out of the fray on lap seven.

With two laps left, Lucky Hendriansia had made his his way through to third and attempted to tow the  the now four-bike group towards Tatchakorn. It was to no avail and Faerozi and Fadly got through until the final turn shuffle saw Irfan take third from Piyawat, Fadly and Faerozi, who crossed the line together.

UMA Racing Yamaha’s Akid Aziz followed up the new qualifying lap record he chalked up on Friday with a clever win in race one.

His team-mate, Haziq Fairues, won the morning’s superpole shootout for the first 15 grid places with a lap of 2:03.333. That was half a second quicker than second-placed Izzat Zaidi on the RCB Accenture YY Pang Yamaha and more than 0.6s better than Hafiza Rofa, who claimed the outside of the front row. Akid led the second row, from McKinley Kyle Paz and Fazli Sham.

Akid shot off the line to control lap one from the front, joined by Haziq and the ONEXOX TKKR SAG Yamahas of Hafiza Rosa and Ahmad Fazli Sham, who all traded places at the front of a 20 strong group. SND’s Wawan Wello, Izzat Zaidi, McKinley Kyle Paz, Affendi Rosli and Richard Taroreh all featured at the front. Wahyu Aji Trilaksana also made his way forward from near the back of the grid, before crashing out at half distance.

On the seventh and last lap, as the machines fanned out, then funneled into the final turn, it was Akid who came through in front of Richard Taroreh and the wily Affendi Rosli, who collected yet another podium. The first eight were separated by exactly a second as they crossed the finishing line. Full results here.