In hot, fine Sunday weather the final day of ARRC Round 3 produced a rich and occasionally heart-stopping day’s racing at Chang International Circuit. 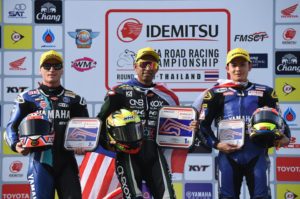 ASB 1000: Azlan outwits Parkes and Apiwat to do the Buriram Double

Azlan got his BMW away well, from Broc Parkes, Zaqhwan Zaidi and Yuki Ito. Apiwat Wongthananon was slow off the line, but quickly fought his way through to third, as Zaqhwan dropped slightly off the pace.

Parkes, then Apiwat got past Azlan. The Australian was unable to break clear, but his Thai and Malaysian challengers were also unable to get past. The game changed on the final lap as Azlan moved past Apiwat for third and put Parkes under pressure. Apiwat fought back and the three approached the notorious turn 12 together. Azlan moved to the inside of Parkes, lost the front, saved it on his knee and scrambled to the line a wheel in front of Parkes, who was just four thousandths clear of Apiwat, who scored his second P3 of the weekend.

Zaqhwan held steady to take fourth, a second clear of Ahmad Yudhistira, who did another brilliant job for Victor Racing Team as the top privateer. Yuki Ito, who went back after a promising start, finished sixth ahead of Kawasaki Thailand’s Bryan Staring.

Parkes stays at the top of the standings after another solid weekend’s work, moving up to 105 points, while Azlan’s double brings him to 97 ahead of Zaqhwan on 84. 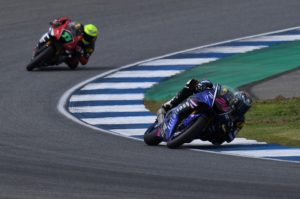 Supersport 600: Peerapong turns pressure back on his rivals to make it six from six

Pundits pontificating about pressure piling up on Peerapong Boonlert finally got the point today. Yamaha Thailand’s supersport ace is simply sticking to his plan and allowing the tension to tighten on his main rivals, Adam Norrodin and Kasma Daniel Kasmayuddin, as they grapple for ways to get closer.

In race two today, Kasma got the best launch from second place on the grid to lead out of turn one from Adam, Andy Farid Izdihar and Peerapong Boonlert, who took another two corners to work his way into the lead.

AP Honda’s Kritchaporn Kaewsonthi and Passawit Thitiwararak took each other into the gravel and out of contention on lap two.

Adam pushed Kasma back to third and they stretched away from Andi, who led Ramdan Rosli, Azroy Anuar, Rheza Danica Ahrens, Afif Amran and Helmi Azman. By mid-distance, Adam was clear of Kasma and unable to do anything about the championship leader, who edged calmly away at the rate of few tenths each time around Chang Internationals 4.55 kilometres.

Behind Kasma battle for third place was resolved when Rosli got past Andi on the penultimate lap to cross the line fourth and fifth, around 13 seconds behind the winner.

Peerapong’s hatrick of doubles put him on 150 points, a lead of 79 over Andi Farid, who has Azroy and Adam tied just behind him on 69. 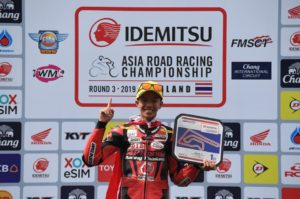 Tatchakorn led out of turn one at the start of race two with Andy Fadly, Muklada Sarapuech and Irfan Ardiansyah hot on his heels. Muklada got through to lead as they completed lap one, shortly after which her Honda broke down at the back of the circuit, leaving her a long, slow ride back to the garage.

From lap two out of ten, the lead was contested mostly by Irfan and Tatchakorn, until lap six, when they were joined by Lucky Hendriansia, Awhin Sanjaya, Piyawat Patoomyos, the Yamaha of Faerozi Toreqotullah and the Kawasakis of Fadly and Iyoshi. 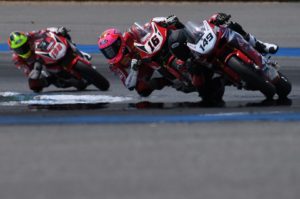 Awhin led into the last lap, followed by Astra team-mate, Irfan, Tatchakorn, Fadly and Faerozi. Iyoshi was edged wide and out of contention at turn four, Tatchakorn took the lead and held onto it as Awhin, Faerozi, Irfan and Fadly completed the top five, who were covered by less than a second. Iyoshi came through to sixth ahead of Piyawat and Lucky. The Yamahas of Rey Ratukore and Rafid Topan were ninth and tenth.

Fadly’s fifth place was enough to put him one point ahead of Muklada to top the standings on 87. Aiki Iyoshi is third on 78, while Tatchakorn’s impressive weekend brings his total to 74. 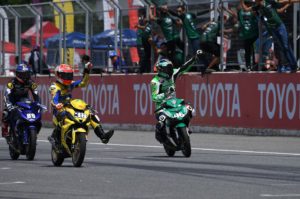 A red flag at the start caused by sickening crash when Hafiza Rofa’s engine cut out on the way down to turn one. Travis Hall, Le Khanh Loc crashed in the ensuing chaos, but were unhurt.

With race distance cut from eight to six laps, Haziq Fairues converted his pole position into an early lead at the restart, chased by team-mate and race one winner, Akid Aziz, Affendi Rosli, Peerapong Luiboonpeng, McKinley Kyle Paz, Wawan Wello, Ahmad Fazli Sham and the rest of the 27 bike swarm. Adib Rosley took the lead for RCB Accentwire YY Pang Yamaha before doing a ride-through penalty for a dangerous riding infraction on Saturday. 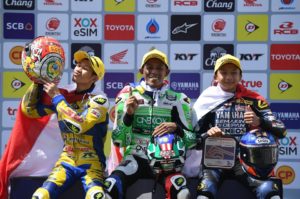 Spectators were treated to underbone racing at its finest, with incredibly close combat  throughout the field. At the start of the last lap picking a winner looked as futile as choosing the number of a lottery ticket, until Fazli Sham conjoured a lead of a few bike lengths in the middle of the lap that he managed to hold to the chequered flag, winning by 0.4s from Wawan Wello and Wahyu Nugroho. A multi bike crash just behind the leaders at the last turn shuffled the pack still further and Wahyu Aji Trilaksana, Richard Taroreh, Peerapong, Faiz Zekri, Rozaman Said and 13-year-old Gun Mie made up the top 10.

After two rounds for the underbones, McKinley Kyle Paz is on 55 points at the top of the championship standings, Wawan Wello is second with 51 and Akid Aziz third on 43.

ARRC Round 4 will take place from 28-30th June at Suzuka.