The heavy rain forecast for Sunday at Suzuka for round four of the Asia Road Racing Championship arrived just before midday, bringing with it plenty of drama. It began with a delay to the start of the Underbone 150 race and a red flag and long interruption to the Supersport 600 race.

It always requires something special to win in this championship, but something extra was produced today by all four race two winners, including an all time record, which was set by a young Indonesian.

On a wet, stormy afternoon, Shinichi Nakatomi, no stranger to ARRC and especially not to Suzuka, scored a brilliant win in a wet race two.

Hitman RC-Koushien Yamaha’s Nakatomi had been unable to find the right set-up for a dry race one on Saturday, but revelled in the conditions that Suzuka served up on Sunday.

From the start Zaqhwan got away well, but was soon passed by Yamaha Thailand’s Ratthapong Wilairot, then Nakatomi, who shot through after starting from ninth on the grid, Broc Parkes and Yuki Ito. Azlan Shah got a poor start, and finished lap one in eighth.  Apiwat Wongthananon, who had started from the outside of the front row, also fell back from the start.

Ratthapong held the lead until lap three, when Nakatomi through. Yuki Ito, riding with a strapped up broken ankle, displaced the Thai for third.

At mid distance Broc was four bike lengths back in fourth, but gradually reeled in and passed Ratthapong. Meanwhile Nakatomi was passed briefly by Ito, but regained his place and stretched his lead by a few tenths a lap, displaying confidence in his bike and his tyres by sliding through some of the turns.  With two laps left, Broc closed on his injured team-mate, who resisted until turn 15 on the last lap, when the Australian got good drive out of the spoon curve and went past.

Ito stayed close, but was unable to stop Broc from taking second, two seconds behind a jubilant Nakatomi. Ratthapong came through in fourth, five seconds further back and with a similar margin between himself and fifth-placed Zaqhwan. Azlan got past Apiwat and Yudhistira to finish sixth. Apiwat won a four way battle for eighth ahead of Kazuma Tsuda, Chaiwichit Nisakul and Bryan Staring.

Before the race, ARRC historians and some of the paddock’s senior riders were recalling that Nakatomi had taken a double victory in the 2013 Supersport 600 race and had been expecting a strong performance from the veteran Yamaha rider.

With 45 points from his weekend’s work, Broc Parkes extends his points total to 150, now 27 clear of Azlan Shah, who earned himself 26 points in Suzuka. Zaqhwan lies third on 115. 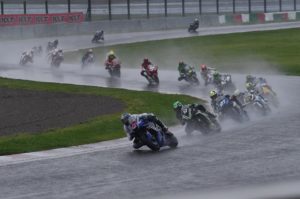 Peerapong Boonlert put the disappointment of having his unbroken run of wins interrupted in race one by Soichiro Minamimoto with a convincing performance in a wet race two at Suzuka. The contest was shortened to five laps after a long delay while race control waited for severe weather pass on by.

Peerapong led from the re-start, chased by Kasma Daniel Kasmayudin, Minamimoto, Yuto Sano and Kyusuke Okuda on the Team MF Kawasaki. Kasma lost touch with the leader on lap two as Minamimoto and Okuda disputed second place. That allowed Peerapong to extend his lead, but Okuda managed to get away from Minamimoto and the leader’s advantage quickly disappeared as the Kawasaki closed on the Supersport championship leader.

Peerapong and Okuda, lapping two seconds quicker than the rest of the field engaged in a nail-biting fight for the front, which the Thai refused to relinquish, crossing the line one tenth ahead of the wildcard and five seconds clear of Minamimoto, who sealed his second podium finish of the weekend.

Peerapong’s points tally after four rounds and eight races stands at 191, 93 points clear of second placed Kasma, who is 15 points ahead of Andi Farid.

Awhin wins in the wet as Fadly extends title lead 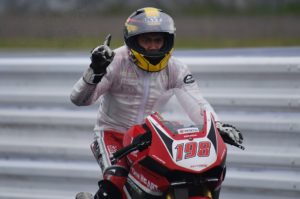 Astra Honda’s Awhin Sanjaya was a class apart in a wet race two, keeping his head while many of those around him were losing theirs, to win by a comfortable margin. It was a good day for the Indonesian team, as Irfan Ardiansyah took another second place and a good day for Andy Fadly, as he finished third and benefited from a DNF by championship rival, Muklada Sarapuech.

Rafid Topan Sucipto made the most of his pole position to take the lead at the start from Muklada, Irfan, Piyawat Patoomyos, Rey Ratukore and Fadly. AP Honda’s Muklada crashed on lap two after grabbing the front brake too hard, which left Fadly just needing a reasonable finish to complete his weekend’s work.

Ratukore began to fall back at half distance, as Awhin got past Irfan for second and Fadly got ahead of Piyawat for fourth, while Yamaha Thailand’s class rookie, Sawapol Lillabong, moved up to join the fight for second and third.

Topan fell out of the lead on lap seven and Awhin pulled clear, leaving the fight behind him and stroked his CBR250RR home four seconds clear of Irfan who took second from Fadly, Piyawat and Suwapol. Aiki Iyoshi stormed through from last on the grid to finish sixth, well ahead of Izam Ikmal, Ratukore and wildcards, Tanimoto and Mori.

Fadly’s 41 points from Suzuka bring his total to 127, which is 23 clear of Irfan and Awhin, who are level on 104. Muklada, who went to Suzuka level on points with Fadly, now finds herself fourth on 97 and 30 points from the top.

Underbone 150: teenage kicks and a new record for Aldi 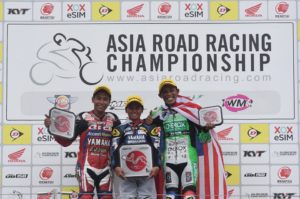 An inspired performance from 13-year-old Aldi Satya Mahendra at a rain-soaked Suzuka saw him become the youngest ever winner of an ARRC race in the championship’s 23-year history.

After the scheduled start was delayed while oil dropped on the track on the sighting lap by Gupita Kresna was cleared up, Aldi made his presence felt from the start, staying within the top half of a group of eight bikes that broke away at the front. By the end of lap two, it was clear that Aldi and YY Pang’s Adib Rosley were making the best of the conditions, while Akid Aziz and Fazli Sham moved up the order ahead of Team One for All’s Peerapong Luiboonpeng and Affendi Rosley. Meanwhile, half the 30 starters fell by the wayside. Gupita’s mechanical problem at the start prevented him from reaching the start line.

Adib spent most of the race at the front, but Aldi kept the pressure on and moved ahead on the last lap and held his advantage through the final chicane and on to the chequered flag to win by 0.297 from the red Yamaha, with Fazli close behind in third, just beating Akid to the final podium spot. Five seconds back, Affendi was fifth just ahead of Said, while Peerapong, Richie Taroreh, Haziq Fairues and Fitri Ashraff Razali completed the top ten.

Despite being among the non-finishers, SND’s Wawan Wello still leads the standings with 71 points to the 59 held by both McKinley Kyle Paz and Akid Aziz.