Indonesian teams continued to exploit home advantage during the second day of racing in Round 5 of the Asia Road Racing Championship at Sentul International Circuit. Over the combined two days in Supersport 600 and Asia Production 250,  Zaqwan Zaidi and Ratthapong Wilairot, with a third place each, were the only non-Indonesians to make it to the podium. In Underbone 150s, where Malaysian riders have been especially strong this year, local racers took half the available six podium places. Astra Honda Racing, which does not compete in the Underbone 150 class, won all four Asia Production 250 and Supersport 600 races and sealed a 2018 championship.

Astra Honda’s Andi Farid Izdihar completed a statistically perfect weekend by adding a Supersport 600 Race 2 win to the pole position and Race 1 he achieved on Saturday in ARRC Round 5 at Sentul International Circuit, Indonesia.

The first half of the race looked much like the previous day’s, as Ahmad Yudhistira rocketed away from the middle of the front row to take the lead. Farid struggled to get away cleanly and Zaqwan Zaidi and Ratthapong Wilairot pushed him back to fourth. By the end of the first lap, the red and white Honda was through to second and began pushing his compatriot’s Kawasaki for the lead. Zaqwan tagged on, looking intent on making the most of the absence of championship rivals, Anthony West and Yuki Ito. Ratthapong Wilairot tried to stay with the leaders, but was two tenths of a second a lap off their pace and slowly drifted back, while Farid’s team-mate, Irfan Adiyansyah, contested fifth place with Decha Kraisart, Azlan Shah Kamaruzaman, and Tomoyoshi Koyama  in a group behind. 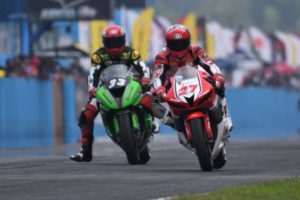 The pattern of the race began to change from lap nine of 16, as tyre wear became an increasing factor and Zaqwan lost touch with the fight at the front. After a few rehearsals, Farid got past Yudhistira, who, after an initial attempt to fight back, slipped out of reach of the leader. Meanwhile, Yamaha Thailand’s Rattaphong got the better of Zaqwan and moved away to make a Honda-Kawasaki-Yamaha podium look likely. Further back, Azlan Shah was not having an easy time in the dispute over fifth, which was being led by Irfan.

Farid’s lead increased in the last few laps, as Yudhistira struggled on the Manual Tech KYT Kawasaki’s worn Dunlops and he took his second win of the weekend by more than three seconds. Ratthapong was another two seconds behind, resisting a last lap charge by Zaqwan, who was fourth. Irfan took fifth as he, Decha, Azlan and Koyama all crossed the line within four tenths of a second. Keminth Kubo and Taiga Hada were ninth and tenth, while Ramdan Rosli, Sheridan Morais, Kasma Daniel Kasmayudin, Zulfahmi Kairudin Amirul Hafiq Azmi took the remaining point scoring positions.

While it is still unknown whether West will race in the final round at Buriram, his 136 points leave him a cushion of 34 points from Azlan, who was able to add only 17 at Sentul. Three points behind Azlan, Farid and Yudhistira are tied on 99, while Zaqwan has 94 and Koyama 91. With 50 points on the board, all five riders have a chance of winning the title.

The Astra Hondas were again untouchable in Race 2 at Sentul, as Rheza Danica Ahrens and Awhin Sanjaya steamed away from the rest of the field, initially with team-mate Mario Suryo Aji, who later fell out of the reckoning for the third race in succession. Rheza needed to finish first or second and finish in front of Mario to seal the 2018 title.

Awhin made another perfect start to lead off the line, followed by Andy Fadly, Mario, Anuparb Sarmoon and Rheza, who messed up his launch once again. By lap two it was an Astra Honda 1-2-3, with Fadly and Rafid Topan Sucipto making determined efforts to spoil the formation. Anuparb fell back into the clutches of a chasing group of seven bikes led by AP Honda’s Muklada Sarapuech.

Just as it was looking like an Astra Honda podium lockout, Mario crashed heavily at Turn 9 on lap eight of 12, leaving Fadly and Rafid to dispute third. On the last lap, assumptions of team orders that would see Awhin make way for Rheza to win were dismissed, as the team-mates swapped positions and snapped at each other. Awhin got the better of his team-mate on this occasion to take his first AP250 win. Rheza looked displeased on the slowing down lap, though a smile made it to his face in parc ferme as the fact he had won the title began to sink in. Fadly got the better of Rafid to join the podium, while Muklada again shrugged off her left wrist injury to win a hard fight for fifth from wildcard, Sigit Purno Harjono, Anuparb, Anggi Setiawan, Rey Ratukore, Yossie Legisadewo, M. Faerozi, Nico Julian, and Peerapong Boonlert who were all split by just 1.5 seconds on the line.

With Rheza already declared champion with 193 points and Mario’s misfortunes, Anuparb moves into second place on 126 points, four ahead of Mario, while Awhin has 117, and Rafid 113. 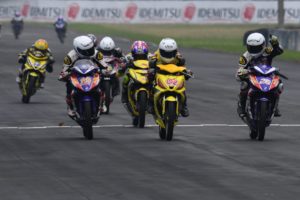 With Izzat Zaidi second in the standings and declared unfit to ride, the focus of attention for Race 2 was whether SCK Rapido Hi Rev Honda’s Helmi Azman could clinch the 2018 championship by finishing first or second at Sentul.

In a race that featured a good deal more wheel-to-wheel combat than we had seen in Race 1, the Malaysian championship leader kept himself clear of danger for most of the race, staying within striking distance of the front of a leading group that consisted initially of five, then 11 bikes as the bunch behind took advantage of the battle at the front. Gupita Kresna, who finished third in Race 1, only made it to the first corner, while Travis Hall was another noteable first lap crasher.

After a poor showing on Saturday, the UMA Racing Yamahas of Haziq Fairues and Akid Aziz made their presence felt, trying to break away on occasion, though without success. Wildcards, Agung Fahrul and Wawan Wello, also kept themselves in contention.

Helmi was well placed on the last lap, until a bike got out of shape in front of him forcing him to slow and change direction. He had to settle for sixth, while Haziq, Agung and Akid crossed the line together, separated by an almost imperceptible five hundredths of a second. Wawan took fourth ahead of Reza Fahlevi, Helmi and Adib Rosley. Amirul Ariff Musa, Wahyu Nugroho and Iaham Elsan Efendi rounded out the top ten. It was another bad day at the office for 2016 champion, Wahyu Aji Trilaksana, who could only finish 14th.

Helmi, with 164 points will take a championship lead over Izzat of 42 to Thailand at for the sixth and final round over the first weekend of December. Ahmad Fazli Sham and Akid Aziz lie fourth and fifth with 87 and 83 points respectively.