Underbone racing is a unique genre of motorsports that began predominantly in South East Asia, primarily, Indonesia, Thailand and Malaysia. In recent years, the popularity of the sport has fired up in other emerging Asian markets such as Vietnam and the Philippines, to name a few.

An Underbone race is renowned for its pack-racing characteristics. It’s always head-down-elbows-out from lights to flag.

In terms of wheel size, engine position and power transmission, the underbone bike is functionally identical to conventional motorcycles. 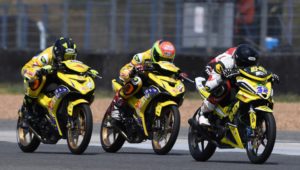 Underbone As A Grassroots Platform – Indonesia and Malaysia, in particular, has been successful in developing the sport of Underbone racing into a viable grassroots platform. The bikes are smaller and lighter, easily managed by kids as young as 13. With less horsepower, rider talent comes to the fore. The smaller size of the bikes allow underbone races to be held outside of traditional race circuits. Hence, the popularity of street racing in South East Asia. This key point – the mobility of the underbone championships – is one of the reasons for its immense popularity. Instead of relying on fans to travel to a fixed race circuit, these mobile championships bring the excitement of the sport right to the doorsteps of their fans.

The Notables – Every single Malaysian and Indonesian rider currently racing in either the world or European series can trace their roots back to Underbone racing. These include Hafizh Syahrin Abdullah, Khairul Idham Pawi, Adam Norrodin, Zulfahmi Khairuddin, Doni Tata Pradita, Rafid Topan Sucipto, Dimas Ekky Pratama, and Gerry Salim, to name a few. Other notable names include Red Bull Rookies rider Kazuki Masaki who also spent a couple of years on the Underbones as part of his early training. 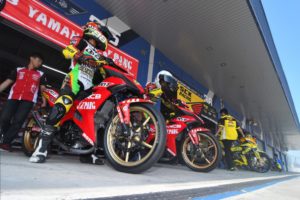 It’s Not A Conveyer Belt – However, the image of underbone racing as a conveyer belt that continuously spit out aspiring young riders for the world stage is fictitious at best.

Underbone racing in Malaysia, Indonesia and Vietnam have become successful racing series in their own rights. Many of the top riders have established lucrative careers, some that span close to a decade.Some choose to chase after the GP dream. Others don’t. It’s the riders’ decision and freedom to determine the course of their careers. This explains why, in 2018, the Underbone 150cc class features as many as five champions on a single grid.

What’s New In 2018? – The latest announcement on the use of Moto3 tyres in the Underbone 150cc class had ignited a flurry of excitement from Asian fans. A race class renowned for its close fighting has now been taken to a whole new level as the new tyres allow riders better rolling speed, improved braking points and deeper lean angles.

West, Rheza and Helmi lead the way to India for Round 4