Perfect weather prevailed again at Suzuka today for Day 2 of ARRC’s third round of 2018 and helped to produce a dramatic show of qualifying and racing. Supersport 600 defending champion, Azlan Shah Kamaruzaman, broke a run of bad luck and injuries at the historic circuit by leading a 1-2 for Manual Tech KYT Kawasaki, while close, bruising encounters in the Asia Production 250 and Underbone 150 were no less compelling.

THE BARK OF UNDERBONE 150s again broke the tranquility of the early morning in the hills of Mie Prefecture for a 10 minute warm-up in preparation for Superpole.

The ARRC Underbone Superpole competition is one of the most compelling parts of the weekend for 150cc aficionados. It was introduced to negate the effects of slip-streaming and tag-teaming, by sending the fastest 15 riders, as determined by Friday’s qualifying results, out in three groups of five, each bike being set off at 20 second intervals. Riders do an out-lap, one timed flying lap and then a slowing down lap. It is a high pressure opportunity for riders to get the best possible grid position without any guidance or aerodynamic assistance from other competitors. They set off with the 15th qualifier first and the fastest last. At Suzuka, with its 5.8m length and 17 of the most testing turns in world motorsport, it is difficult to put together a perfect lap and presents Asia’s Underbone elite with the most difficult individual challenge in the calendar.

In the morning Superpole session, it was SCK Rapido Hi Rev Honda’s Fakhrusy Syakirin Rostam who grabbed the most advantage, moving from 13th in qualifying practice to claim pole position with a lap of 2:41.390. The fastest rider from Friday, the resurgent Gupita Kresna, was next best on the Yamaha Yamalube SND Factory machine, half a second behind the tall Malaysian. Md Amirul Ariff Musa, Md Affendi Rosli, Helmi Azman and Wahyu Aji Trilaksana populated the remaining places on the first two rows of the grid.

There was confusion at the start of the race when the red lights failed to go out due to a technical problem. Eventually the ‘Start Delayed’ board was shown, causing nervous moments, particularly for 13-year-old Suzuka debutant, Travis Hall, whose bike stalled on the grid and had to be pushed into pit lane. His team managed to get it going as race direction announced that the quick start procedure would be used to get things underway over a race distance reduced from six to five laps. 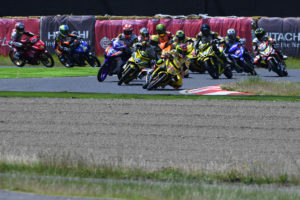 The re-start went without a hitch and Fakhrusy got his SCK Rapido Hi Rev Honda hooked up and away better than the others, before being out-dragged on the downhill run to Turn 1 by Affendi and Gupita. Md Helmi Azman snapped at the heels of his team mate and the rest of the field tried to get in on the action.

Yamaha Indonesia’s Wahyu Aji Trilaksana moved up towards the leaders as the race wore on and, as one rider after another tried, nobody was able to make a break. Wahyu crossed the line at the start of the last lap first from Helmi, Gupita, Fakhrusy, Akid and RCB Yamaha YY Pang’s Izzat Zaidi and Md Adib Rosley. 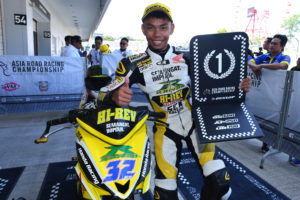 Helmi and Fakrusy broke away on the Spoon curve before the straight overpass section, while Adib ran wide and out of podium contention. Helmi kept his position at the front and held his line through Turn 15 and the tricky final chicane to take the win from Akid, Gupita, Wahyu and Fakhrusy. Izzat claimed sixth from Haziq, Peerapong Luiboonpeng and Adib, who recovered to finish ninth, just 1.2 seconds behind the winner. Less than one second further back the remaining two SCK Rapido Hondas of Fakhrusy and Hall came through in 10th and 11th.

Helmi’s second win of the season puts him at the top of the standings with 81 points, an advantage of 4 four over Izzat. Akid is in third place with 61. Full results here.

IN ASIA PRODUCTION 250 Rheza Danica Ahrens continued his perfect weekend by taking pole position with a time six tenths quicker than Manual Tech KYT’s Andy Md Fadly, who was next best and a full 1.7 seconds faster than Gerry Salim’s pole winning time 12 months previously. He followed it up by clearing off as soon as the red lights went out to win the Race 1 by 5.2 seconds. 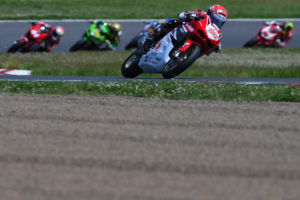 What went on behind the imperious Indonesian, however, was far from predictable, with Fadly, Muklada Sarapuech and Mario Suryo Aji looking the most determined to grab the best of what was left for them. It was also a case of damage limitation for Yamaha which had so far been unable to get close to the dominant Hondas and Fadly’s fast Manual Tech KYT Kawasaki. In qualifying ONEXOX TKKR’s Reynaldo Chrisantho  Ratukore snatched the fastest Yamaha mantle from the shoulders of Yamaha Thailand’s Anuparb Sarmoon.

The race for second place had as much drama as we have ever seen in the competitive cauldron of AP250s. As Rheza scampered away, Fadly chased in vain before AP Honda’s Muklada asserted herself and showed him some lines and hard braking techniques that the 18-year-old Malaysian was struggling to find answers to. Watching just behind them was Astra Honda’s supporting cast, Awhin Sanjaya and ‘Super’ Mario, who also pulled Kritchaporn Kaewsonthi up towards the front of the P2 punch-up. 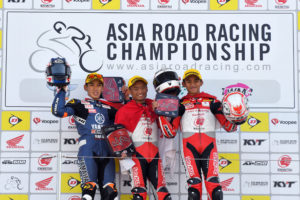 A confident looking Muklada broke away from the group on lap 3 until a mistake under hard braking a lap later made her run wide and allowed Mario, Fadly and Awhin back onto her tail, with the hard riding Anuparb keeping his Yamaha just within reach. On the last lap it looked as though Mario and Muklada would sort out the remaining two podium positions between them, until they were caught by Fadly at the end of the overpass. The Kawasaki rider made a mess of the entry to Turn 15, pushing Muklada wide and then went into the final chicane too hot, held the front brake lever too hard and too long and hit the deck. As the others took avoiding action, Anuparb seized his chance and squirted through the melee to grab a hard earned second ahead of Mario, Awhin, a recovering Muklada, the Yamahas of Rey Ratukore and Ahmad Afif Amran, Kritchaporn, Yamaha Thailand’s Peerapong Boonlert and Anggi Setiawan, who completed the top ten. Five seconds further back Akito Narita was 11th, beating the next finisher and fellow wildcard, Takehiro Yamamoto to the line by 7.7 seconds.

Rheza now has 98 points, which stretches his championship lead to 16 points from Anuparb and Mario, who are tied on 82. Muklada is 20 points further back in fourth place. Full results here.

SUPERSPORT 600 qualifying was characteristically cagey, with only the Yamahas of Ratthapong Wilairot and Yuki Ito moving into the 2:12s before the halfway mark, while the injured Decha Kraisart went out briefly, recorded a lap of 2:13.500 and came back to the pits to save his injured right wrist for the race. Last year’s double winner, Anthony West, improved to 2:13.236 after a quiet Friday.

With 12 minutes left, Manual Tech KYT Kawasaki’s Azlan Shah Kamaruzaman began to push, going to the top of the screens with 2:12.717, while just behind them, Keminth Kubo moved to within a few hundredths of his Yamaha Asean team mate, Yuki Ito. Then Zaqwan Zaidi put in a convincing mid-session bid of 2:12.867 for the final place on the front row. As the clock counted down to the end of the session, most riders were striving for improvements, but none succeeded, leaving Azlan on pole position from Ratthapong and Zaqwan. Ito and Keminth were joined on row 2 by fastest wildcard, Kyosuke Okuda, while Anthony West led row 3 from Ahmad Yudhistira and Decha. 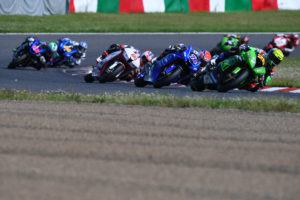 At the race start, Azlan converted his pole position into an emphatic holeshot, getting clear of Ratthapong, Zaqwan and Ito. Tomoyoshi Koyama catapulted himself away from the fourth row to put himself in touch with the leaders through the rhythmic curves of Suzuka’s first sector.

Ratthapong appeared to have the best of the early pace, easing himself to the front on lap 2. Yamaha Thailand’s new recruit looked comfortable at the front, but was not able to earn any kind of margin for himself. Anthony West made his presence felt by moving through to fourth. Azlan slipped to third and then fourth, Ito grabbed the lead and then swapped it every few turns with Ratthapong.

As the race wore on, Zaqwan, who alone had started with a hard front tyre and a soft rear, began to rue his choice, while Ahmad Yudhistira worked his way stealthily into striking range for the podium. Ratthapong fell back, Keminth Kubo moved forward and West breathed fresh air at the front for the first time on lap five before giving way to Azlan who, seeing his team mate’s intent, got his head down again at mid distance. On laps eight and nine the two Kawasakis exchanged the lead; West got past them several times under braking into the turns, only to get outdone on the 900m overpass on each lap. Astra Honda’s Andi Farid Izdihar caught the front group, prompting a recovery by Zaqwan, to make it a seven-bike fight for the lead. However, Farid pushed beyond the limit, getting his rear wheel onto the grass under braking on lap 11 and had a landing that looked almost as hard as the one he had at Tailem Bend in Round 2.

With two laps remaining, Azlan showed the steel that has taken him to two championships and gave himself some room at the front from Yudhistira, who had to deal with persistent attacks from Ito and West.

As they came into the final chicane, Azlan held his advantage, as did his team mate to deliver a 1-2 to a jubilant team manager, Katsuake Fujiwara, and the rest of the Manual Tech KYT crew. West muscled his way into third from Ito, Zaqwan and Kubo.

Behind them, Koyama was 7th from Ratthapong, with wildcards, Soichiro Minamoto and Okuda completing the top 10. The dogged Decha Kraisart gritted his teeth for 12 laps to take 11th in front of Taiga Hada, Azroy Hakeem Anuar, Kasma Daniel Kasmayudin and AP Honda’s Passawit Thitiwararak who collected the last championship point for finishing 15th. 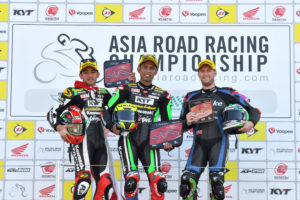 It was an important win for Azlan, who has taken more broken bones than trophies away from Suzuka since his podium at the inaugural race there in 2013. It gives him 63 points and the championship lead going into Race 2, two more than West, while Yuki Ito lies just behind them on 55. Ratthapong is a further 15 adrift in fourth position. Full results here.