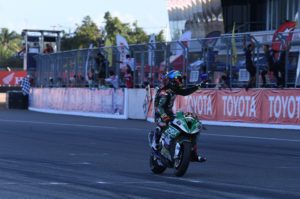 The ONEXOX TKKR SAG BMW moved straight into the lead from the start, with Zaqhwan, Apiwat, Ratthapong, Frederico and Broc who had made a steady start.

Azlan stretched away at the rate of around half-a-second a lap, leaving Zaqhwan to defend second place from Ratthapong, Zaqhwan, Apiwat and Sandi. Broc made his way up to fifth and locked horns with Apiwat. On lap four Sandi moved into third and then second on lap five with the help of some Panigale power on the run up to turn three to get past Ratthapong, who went into the gravel a few turns later. At half distance Zaqhwan began to break free in second and the two Thai Kawasakis of Chaiwichit and Thitipong moved up and into the tussle for second and third. Broc went wide at turn four on lap eight, dropping to seventh behind team-mate, Yuki Ito. Thitipong and Chaiwichit came through into fourth and fifth.

At the start of the last lap, Azlan was 6.7 seconds ahead of Zaqhwan. Thitipong had got past and away from Apiwat to consolidate third.

Azlan enjoyed his last lap and trundled over the line as the 2019 champion to finish five seconds in front of Zaqhwan with Thitipong another second behind in third. Apiwat finished fourth ahead of Sandi, Chaiwichit and Broc, who was seventh. 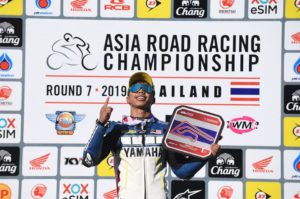 Once again the four fastest Yamahas began their breakaway from the start, led initially by Kasma Daniel Kasmayudin, then Adam Norrodin and Peerapong Boonlert, with Afif Amran in their wake. Behind them, the best Honda was once again Astra’s Andi Farid from Azroy Hakeem Anuar, with Victor Racing’s Javier Orellana Malloy attempting to split them on his privateer R6.

Adam moved into second in front of Kasma as Peerapong stretched his lead out to eight tenths by the halfway point of the 12 lap race. Then Kasma got past Adam at turn three and set off after Peerapong, lapping three tenths quicker than the Yamaha Thailand rider. The Hong Leong Yamaha rider got through on lap 11, followed quickly by Adam.

At the start of the last lap it was Kasma from Adam and Peerapong. Afif was 5 seconds back in fifth and Andi Farid remained the best of the rest further behind. Adam got past his compatriot as they peeled into turn three and Peerapong got out of shape just behind them to drop out of contention. Kasma moved back to the front at turn eight. As they braked for turn 12 for the final time, Adam attempted a block pass on the inside of Kasma, who switched brilliantly to the inside and won the short sprint to the finish line.

Although the championship was already done and dusted, Peerapong’s third place took his points tally to 300 from 14 starts, while Kasma, who missed round two, finished on 224. Along with Andi Farid, he will head off to Moto2 next season.

AP 250:  First win for Piyawat as Fadly wraps up the title 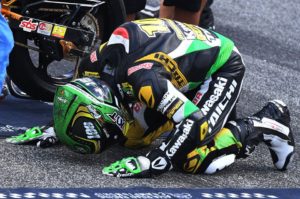 AP Honda’s Muklada Sarapuech shot off the line and into an early lead, which she stretched out to 0.6s at the end of lap one from Aiki Iyoshi, Rafid Topan Sucipto, Lucky Hendriansya, Tatchakorn Buasri and wildcard, Vorapong Malahuan. Championship contenders Irfan Adriansyah and Andy Fadly were seventh and eighth.

Rafid moved to the front of the group but had no answer to the speed of Muklada, who had pulled out another second on a tightly packed group of ten machines at the end of lap two. At the start of lap four, Muklada’s advantage was up to three seconds, but her engine blew just after she powered out of turn three and her race was done. A few corners later, the leading group thinned out further when Iyoshi crashed out of contention.

Irfan began lap five in the lead from Lucky, Fadly, Rafid and Cao Viet Nam, who had worked his way towards the front. Vorapong moved up to third and made his presence felt, as did Fadly. Cao was the next rider to break down on lap six.

At the start of the tenth and final lap, Tatchakorn was ahead of Irfan, Fadly, Rafid, Vorapong, Muzakkir Mohamed and Piyawat. At turn twelve for the last time, Irfan got out of shape, lost the front and skittled Rafid out of the race. Muzakkir went wide, but got back onto the track to cross the line first from Piyawat, Vorapong, Awhin, Fadly and Tatchakorn. 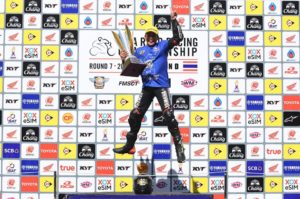 From the start, Aldi Satya Mahendra shot through to the front on lap one chased by the UMA Yamahas of Akid Aziz and Haziq Fairues, with Ahmad Fazli Sham, Wahyu Aji Trilaksana and another 25 machines snarling and snapping behind them. Aldi Satya was one of two crashers on lap two, but he remounted and continued at the back of the field. Mckinley Kyle Paz moved up after a slow start to join the top ten, as did his team-mate, Fernando Masato. As another two riders went down, Wawan Wello, Fitri Ashraff Razali and Richard Taroreh moved through to the front of a depleted leading group.

McKinley Kyle Paz went down on the penultimate lap, but got back on the UMA Philippines Yamaha to continue.

Akid sealed a weekend of disappointment by breaking down again and saying goodbye to his championship chances.

In the inevitable last corner shake-out, Fazli crashed, Richie came through for the win, with Wawan and Wahyu Aji a few thousandths behind. Ashraff was fourth, then it was Affendi Rosli and Izzat Zaidi in sixth. Kyle was sixteenth, so with him and Akid no-scoring, he maintained his position at the top of the standings to confirm the title.