In conditions that were blisteringly hot today, even by Sepang’s standards, Azlan Shah Kamaruzaman won a titanic race long duel with Thitipong Warakorn to take the first win in the new ASB 1000 class and the first ever win for a BMW motorcycle in the 23-year history of the Asia Road Racing Championship. Broc Parkes opened his 2019 ARRC account by finishing third.

In qualifying, Thitipong for Kawasaki Thailand and Azlan on the XOXO TKKR SAG BMW were strong from the get-go. As they approached the final ten minutes, Thitipong went 0.266 clear of early leader Azlan with a lap of 2:05.505. Parkes crashed into the gravel with seven minutes left, while in sixth place. Azlan pushed again, but was unable to get closer to the Thai rider. Zaqwan Zaidi made the best of his Honda Asia-Dream machine to record 2:06.323. Another impressive session by Ahmad Yudhistira on the Victor Racing Yamaha saw him lead row two from Chaiwichit Nisakul and Parkes, while Yuki Ito was seventh ahead of Apiwat Wongthananon and Timothy Joseph Cua Alberto on the Access Plus Ducati.

Thitipong managed to get every one of his Kawasaki’s horses into the rear Dunlop’s contact patch at the start, rocketed into turn one clear of Azlan and managed to stretch his lead to a few bike lengths. Behind Azlan, Yamaha Thailand’s Apiwat got the better of Parkes and Zaqwan to move into third. Zaqwan broke down and Ito crashed on lap five and Parkes, having found his rhythm, got back in front of the Thai Yamaha. By the seventh lap of 12, Thitipong and Azlan were separated by half a second with a 2.7 second buffer back to Parkes.

Apiwat subsequently dropped back and was caught and passed by Yudhistira. Azlan closed up on Thitipong and passed him cleanly into turn 15 on lap 10. The Thai rider had no answer for the late pace of the BMW and dropped back to finish just short of two seconds behind. Parkes came home in a safe third, another 5.5 seconds behind and seven seconds ahead of Yudhistira who completed an excellent weekend’s work for Victor Racing by taking fourth place from Apiwat. Farid Adrul Hisham was sixth, well clear of the two Access Plus Ducatis of Alberto and Serrapica. 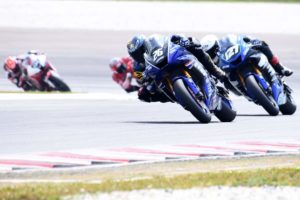 Yamaha Thailand’s Peerapong Boonlert showed maturity well beyond his 20 years to win the first race of the season, despite being chased hard for eight out of ten laps by Hong Leong Yamaha’s Kasma Daniel Kasmayudin. Adam Norrodin made it an all Yamaha podium by finishing third.

During the morning Adam had won pole position by 79 hundredths from Peerapong with a lap of 2:10.021. Kasma was 0.213 slower and completed the front row.  Just five hundredths of a second separated Kritchporn Kaewsonthi, Ahmad Afif Amran and Andi Farid Izdihar on the second row. Behind them were Azroy Hakeen Anuar, Helmi Azman and Ramdan Rosli.

Peerapong got away well from the middle of the front row, but was out-dragged into turn one on the outside by Kasma Daniel. The Thai rider took the lead under braking first time around at turn 15 and the two blue Yamahas opened up a slight gap to Adam, who found himself having to deal with urgent advances from Andy Farid and Helmi. Andy highsided out of the contest at half distance and Adam took advantage to open up a gap on Helmi who was being caught by Azroy.

Peerapong kept his head under pressure from Kasma and started to stretch away from the Malaysian with two laps remaining to start the last lap with a 1.3 second advantage. With Adam some 3.5 seconds adrift in third, Azroy sensed he could get the better of his team-mate and slipped past Helmi into fourth, a further three seconds back. Hong Leong Yamaha’s Ramdan Rosli finished sixth from AP Honda’s Kritchaporn , Astra Honda’s Rheza Danica Ahrens, Ahmad Afif Amran and Liam Taylor MacDonald, who was the last of the ten finishers for Victor Racing. 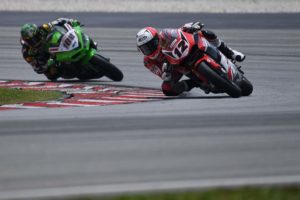 Astra Honda’s Lucky Hendriansia won his first ever AP 250 race this afternoon after a fierce battle with Manual Tech KYT’s Andy Fadly. With Muklada Sarapuech breaking down early in the race, the pace of these two was beyond what his team-mates could manage.

Andy Fadly made the best of his outside front row position, taking advantage of a mistake by Irfan Ardiansyah to lead out of turn one and maintain his station to the end of the opening lap, chased by Muklada and Irfan. Lucky Hendriansia took the lead on lap two as Muklada and the other two Astra Hondas joined Fadly in a group of five that was well clear at the front. Moments later, Muklada’s Honda spluttered as she exited turn 14 and her race was over.

The pace of Lucky and Fadly was too much for Irfan and Awhin, who fell back and settled down to contest the third step of the podium, which went to Irfan. A further ten seconds back, Faerozi Toreqotullah, Rey Ratukore, Aiki Iyoshi and Muzzakir Mohamed fought over fifth position and eventually finished in that order.

With nothing between the Honda and the Kawasaki at the front as they started the last lap, the final corner was to prove decisive. Lucky had a wheel in front as they squeezed the brakes and held his line as Fadly tried to go around the outside, only to get out of shape as he found there was no space for him to cut back into. Lucky powered through to the chequered flag to take the win at the first time of asking. Fadly was disconsolate, but with Muklada, probably his main rival for the title, failing to score, he can take some comfort and come back fighting for Race 2 tomorrow.

In the morning’s  Superpole shootout, Akid Aziz, had come out on top, beating yesterday’s slipstream assisted qualifying time by almost six tenths with a lap of 2:33.216. His UMA Yamaha Philippines counterpart, Kyle Paz was second, more than half a second slower and there was a similar gap back to Yamaha Racing Indonesia’s Aldi Satya Mahendra. Fernando Masato, Fazli Sham and Peerapong Luiboonpeng made up row three.

Akid made a clean start to convert pole into P1, leading a pack of nine bikes that got away from the rest of the field on the opening lap. Kyle Paz took turns in the lead with Peerapong, Masato, Aldi Satya Mahendra, Wahyu Nugroho, Affendi and Wawan Wello. Hi Rev SCK’s 13-year-old Japanese recruit, Gun Mie, was also in the group with Haziq Fairues and Fazli Sham.

Akid let Kyle Paz through to the lead on the last lap, but immediately found himself in the clutches of Affendi, Fazli and others. The Filipino got cleanly through the last corner to take the win ahead of Team One for All’s Affendi Rosli, who led a tightly packed chasing group across the line consisting of Akid Aziz, Peerapong Luiboonpeng and Fernando Masato. Fazli crashed on the exit to the corner and failed to score.

Underbones will again lead the way tomorrow when the Race 2 program gets underway at 13:10 local time.