The ARRC paddock woke up to clear skies and sunshine on Day 1 of its annual pilgrimage to Suzuka Circuit for the third round of of 2018. Veterans and rookies alike made the most of the ideal conditions either to re-aquaint themselves with Japan’s legendary race track or to begin the challenge of unravelling its mysteries.

With the return from other duties of Anthony West and Md Zaqwan Zaidi, and the addition of some formidable wildcard entries, the headlining  Supersport 600cc class is at full strength, with a 24-strong grid. 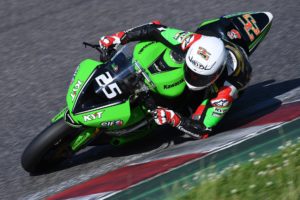 Despite arriving at Suzuka a mere six hours before pit lane opened, it was Zaqwan who set the pace for MUSASHI Boon Siew Honda in the first outing. Manual Tech KYT Kawasaki’s Azlan Shah Kamaruzaman and Ahmad Yudhistira along with Yamaha Racing Asean’s Yuki Ito, gave chase early on, before Yamaha Thailand’s Ratthapong Wilairot got his eye in and joined the fun at the front. Decha Kraisart, recovering from a broken right wrist sustained at the last round in Australia, started brightly enough, but faded as pain and muscle weakness took its toll. The rest of the field, including championship leader and last year’s double-winner, Anthony West, used the first outing for familiarisation and bike set-up, as is normally the case in the senior class.

Times tumbled by around half a second during the lunchtime workout, with Ratthapong continuing to build on the strong form he has been showing since his switch from Honda to Yamaha. He overcame Azlan’s early lead and was the first rider into the 2:13s.

Zaqwan also continued strongly, but crashed hard at the hairpin on a mid-session out-lap to bring the red flag out to clear his battered Honda from its place, which was too close to the apex.

Yudhistira went a tenth quicker than Ratthapong at the restart, with Ito and Keminth Kubo also improving. Ratthapong put himself back at the top with a lap of 2:13.599 by the end.

Zaqwan and his machine were back in working order for FP3. The two-times former champion getting into the 2:13s early on and chasing a determined Azlan for the top slot. Ratthapong, Ito and Yudhistira bunched up behind them, all within three tenths. Half a second back, Webike IKAZUCHI’s West led another closely contested group in the 2:14s comprising Taiga Hada, Keisuke Kurihara and Tomoyoshi Koyama.

With 17 minutes remaining, Kyosuke Okuda, who had been the best of the wildcards all day, moved into the mid-2:13s. Keminth Kubo, who had enjoyed a good midday session, also put the hammer down with a little help of a tow from a flying Zaqwan to get within three hundredths of the Malaysian to go third, almost five tenths clear of team mate, Ito.

As the last chequered flag for Friday was waved, Azlan was the only rider to slip below 2:13, with a 2:12.984, to lead the day overall from Zaqwan, Keminth, Ratthapong, Okuda and Ito. Yudhistira, West, Koyama and Hada completed the top ten, while Andi Farid Izdihar was the fastest rookie for Astra Honda. Britain’s Joe Francis, in his second ARRC outing and on his first visit to Suzuka, improved his times throughout the day on his Webike IKAZUCHI Yamaha to finish 15th on 2:15.298. Full results here. 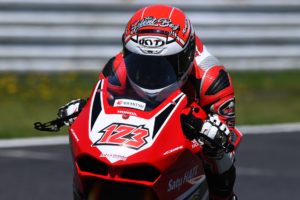 AP Honda’s Muklada Sarapuech, who knows Suzuka well from the All Japan 250 series, as well as the 4 Hours Endurance race, also set a strong early pace, as did wildcard, Akito Narita on the Team Hiro Honda and Md Andy Fadly on the Manual Tech KYT Kawasaki.

The first session was red-flagged when Rafid Topan Sucipto crashed heavily, injuring the rider and leaving the track surface in need of a clean-up. At the restart Rheza struck again, slicing a full 0.9s from his previous best.  The quickest Yamaha was sixth, under the guidance of Anuparb Sarmoon, who managed to break into the 1:29s just before the chequered flag came out.

Free Practice 2 yielded no improvements among the top riders, but it did give some of the new visitors a chance to put some good laps together. Muklada gave her rookie teammate, Kritchaporn Kaewsonthi a helping hand into the 1:29s, while CKJ’s Ahmad Afif Amran and Astra Honda’s Mario Suryo Aji both moved into the low 1:30s.

Rheza jumped straight to the top of the timing screens again in FP3, 1.7s clear of Kritchaporn, Muklada and Andy Fadly. Anuparb got between the two Thai Hondas after 10 minutes, before they responded by pushing him back into 4th.

After a mid-session break, Rheza improved to 2:28.241 gapping Muklada by over half a second, who then found herself behind Fadly as the Indonesian managed a round of 2:28.459. Their pressure spurred Rheza back into the 2:27s, as the Astra Honda man decided to put down another marker ahead of tomorrow morning’s qualifying session.

Reynaldo Chrisantho Ratukore had a good third session, with a best time of 2:29.874, to end up 5th on combined times, two tenths clear of Anuparb and claiming the honour of being the fastest Yamaha of the day for ONEXOX Racing Team.

Returning former champion, Takehiro Yamamoto, finished 11th, after a day of working on the set-up of his new Trickstar Kawasaki.

Further down the order, the Filipino pairing of McKinley Kyle Paz and Masato Fernando were 22nd and 23rd, as they worked on both the bike and getting to know the circuit. Sethu Rajiv was the better of the two Indian riders in 27th in front of Karen Ogura, Cao Viet Nam, Kanatat Jaiman and his Idemitsu Honda team mate Anish Damadora Shetty.

Round 3 is over for Rafid Topan, after being declared unfit to continue after his morning crash. Full results here.

By the second session most riders had dialled themselves in for the unique challenges of the Mie Prefecture circuit. UMA Racing Yamaha duo Haziq and defending champion Md Akid Aziz spent the session playing tag, showing good pace throughout and breaking into the 2:39s, a likely pace for the leading group when racing gets underway.

In 3rd place and six tenths behind Akid, SCK Rapido Hi Rev Honda’s Md Helmi Azman led SND’s Syahrul Amin and Gupita Kresna from Peerapong, who all circulated within 0.3 seconds of each other. Wahyu had a quiet session, clocking a best lap 0.8s slower than his fastest in FP1, while championship leader, Izzat Zaidi, was a notable laggard in both sessions, only managing 2:43.944 in FP1. Australia’s Travis Hall, in his second Underbone outing and his first visit to Suzuka, steadily improved his pace, getting into the 2:43s and placing himself 12th out of 20 on combined Free Practice times. 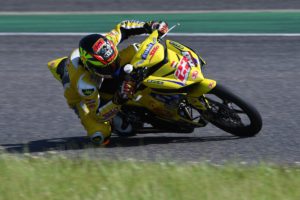 In Qualifying it was Izzat’s RCB Yamaha YY Pang team mate, Md Adib Rosley who set the early pace, clocking a time of 2:40.7 which he was unable to improve upon. He was pushed back first by Helmi, then Syahrul, Affendi and Peerapong. Then Gupita put in a killer lap of 2:39.262, leapfrogging 15 riders to go nine tenths clear of Helmi at the top of the screens. The SCK rider improved by a few tenths but was unable to get close enough to challenge the Indonesian former double champion.

Syahrul qualified 3rd, 0.8s adrift of Helmi, with Team One for All pairing, Affendi Rosli and Peerapong within 0.2s to complete the top five. RCB’s Adib and Izzat were sixth and seventh from 13-year-old Travis, who finished the session 8th ahead of Akid and Wahyu, UMA’s purple pairing of Akid and Haziq had again been playing tag, though without the results they achieved in FP2. Haziq was three slots further back in 12th, in front of Yuzy Honda Vietnam’s Md Amirul Ariff Musa, Fakhrusy Syakrin Rostam, Md Aiman Azman and wildcard, Miu Nakahara, completing the top 15 who will contest the first 15 grid positions in Superpole on Saturday morning. Full results here.