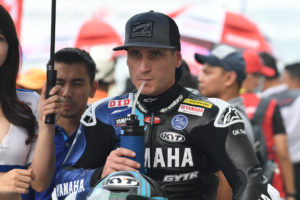 The FIM Asia Road Racing Championship (ARRC) is in Buriram for the second time this season to bring the curtain down on 2019. A few historical markers have been put down along the way this year. For the first time ever the series is having a seventh round and it’s the inaugural season for the Asia Superbike class, which in turn has brought European manufacturers for the first time. 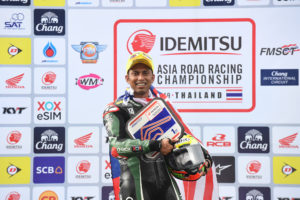 What’s not new is for the premier class championship to be decided at the final round. This time Australia’s fast, consistent endurance racing exponent, Broc Parkes, on 212 points, faces off with Malaysia’s mercurial Azlan Shah, who is 19 points back on 193. Last time they were here, at the beginning of June, for round three, Azlan took a double win, while Broc, on his first visit to Chang International, was fourth in race one and second in race two. That’s a 17 point deficit for the Yamaha man, who can be expected to perform better this time out, so if you follow the form books, put your money on Broc for the title. For an exciting ride at longer odds, jump on board Azlan’s ONEXOX TKKR BMW.

There are other factors to consider. Kawasaki Thailand’s Thitipong Warakorn, who missed rounds two, three and four with serious back injuries, looks close to being fully fit and will leave nothing in the garage in his own quest for a double win. Last week he concluded proceedings at Chang International’s own superbike championship, finishing with four wins from four starts, so he has been enjoying plenty of local track time. Meanwhile, Yamaha Thailand’s Apiwat Wongthananon has been getting better through the season, as he became better acquainted with the R1 and will be looking to improve on the four third place finishes he has claimed so far this year.

Zaqhwan Zaidi, currently third in the standings on 166 points has been fast, but lacked the consistency to put him closer to the top. His Honda Asia Dream Racing by Showa CBR1000RR has found a good turn of speed this year, helping him to two wins and two second places and could see the Malaysian claim a win or at least one podium finish at the weekend. Yuki Ito, riding out of the same Yamaha Racing ASEAN garage as Broc Parkes, should also have something to say.

The main wildcard news is that Italian Frederico Sandi, who put the Ducati Philippines Panigale right among the leaders at Sepang, returns to the team following a car crash that left Swiss rider, Jonathan Serrapica, injured and unable to race.

The climate at this time of year is a little easier in Thailand. The forecast for race weekend shows sunshine and temperatures topping out in the early 30s, so there should be no surprises in store.

Supersport 600: Celebrations for home hero Peerapong and farewells for Kasma and Andi

After dominating the 2019 championship, newly crowned Peerapong Boonlert goes to his home track with Yamaha Thailand in celebratory mood. It’s been a landmark year for the 21-year-old, who also became an expectant father a few months ago. 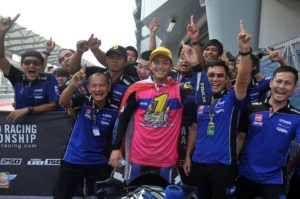 In keeping with the family theme, as the build-up to the season finale got underway, the spotlight swiveled back in the direction of Peerapong’s father, Surapong, himself an ARRC underbone champion in the heady two-stroke era. He took the 1999 110cc title and the 125cc championship. Working tirelessly in his son’s pit garage, Surapong has done far more than hand Peerapong a golden set of racing genes.

Twelve races, 12 podiums, including eight wins to equal Katsuake Fujiwara’s wins-in-a-season record, mean that Peerapong’s achievement will remain forever prominent in the record books. What is likely to be forgotten is how hard he had to fight for many of the results, as Malaysian rivals, Kasma Daniel Kasmayudin. Adam Norrodin and Ramdan Rosli chased hard and occasionally put the Thai into the relative shade of the third step of the podium.

Kasma, together with Astra Honda’s Andi Farid Izdihar, will be leaving the bosom of ARRC to take up rides in Moto2 in 2020. Both riders will remain within the wider organisations that incubated their talents, as Kasma moves into the ONEXOC TKKR SAG Moto2 team, while Andi replaces Dimas Ekky Pratama in Idemitsu Honda Team Asia.

Peerapong won’t be sitting on his laurels. With seven rounds for the first time this year, he has the chance to move beyond Fujiwara’s record and set a target for future champions to aim at. Kasma, Ramdan and Adam will be looking to finish 2019 in style, while the Honda-mounted supporting cast of Andi, Musashi Boon Siew’s Azroy Hakken Anuar and Helmi Azman will be trying to get closer to the R6s. AP Honda’s Passawit and Kritchaporn will also be looking for leverage at their home round.

AP 250: Tied and equalised: Andy and Irfan to decide the title in Buriram 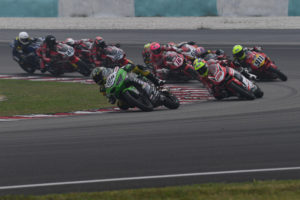 Manual Tech KYT Kawasaki’s Andy Muhammad Fadly and Astra Honda’s Irfan Ardiansyah go to the seventh and final round of the 2019 FIM Asia Road Racing Championship tied at the top of the table with 176 points apiece and each carrying an ‘Equaliser’ cut in their rev limits of 1,000rpm. Taking into account Chang International Circuit’s long straights and an already strong field boosted by formidable wildcards, it is highly likely that the title will be decided off the podium.

Irfan’s team-mate, Awhin Sanjaya, on 162 points and a 500rpm equaliser, is the only rider with a realistic chance of snatching glory from the two leaders, though he could be find himself under tactical constraints. Regular riders looking for wins will be headed by Thailand’s Muklada Sarapuech and her AP Honda stablemates, Tatchakorn Buasri and Piyawat Patoomyos. The third Astra Honda rider, Lucky Hendriansya will also be in the mix, together with fellow Indonesians, Rafid Topan Sucipto, Rey Ratukore and Faerozi Toreqottullah. Aiki Iyoshi, who made a bright start to the season before fading out of contention, will also be looking to make up ground in the final standings

The wildcard line is led by Hikari Okubo, of whom more below. He is joined by former AP Honda rider Vorapong Malahuan makes a welcome return, this time aboard a Yamaha for the Hispeed Racing Team for whom he has been collecting lightweight championships in Thailand in recent years. Meanwhile, Yamaha Thailand brings in Kanatat Jaiman to run alongside young guns, Sawapol Nillapong and Suttipat Patchaeetron. Kanatat knows how to run at the front of an AP 250 race, having previously finished on the podium at Chang International.

Okubo, fresh from a fifth place finish in the 2019 World Supersport Championship, is spearheading the inaugural appearance of Indian motorcycle giant, TVS. Alongside contracted riders, Jagan Kumar and KY Ahmad, Okubo has been drafted in to help with the racing development of the Apache RR310. This debut foreshadows an anticipated full season in 2020 and it will be interesting to see how the promoter, Two Wheels Motor Racing, levels the playing field for the Apache’s 312cc single cylinder engine.

There is no such thing as a dull AP 250 race and this 2019 season closer could produce the best races of the season.

Underbone 150: three ways to take the title for UMA 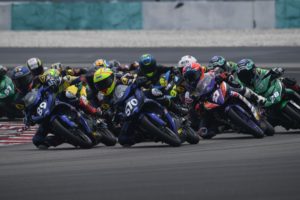 Three UMA riders, Akid Aziz and Haziq Fairues from Malaysia and McKinley Kyle Paz from the Philippines, are hanging precariously from the top of the ARRC Underbone 150 ladder as they go into this weekend’s 2019 title showdown.

Akid leads the way with 119 points to Kyle’s 111 and Haziq’s 98, but, in this most unpredictable of classes and with 50 points on the table for winning races one and two, sticking your neck out with a prediction would be foolhardy. So here goes …

2017 champion, Akid, with three wins and a third from four podium finishes, looks slightly more the part than the young Filipino star, who has two wins and a third. 18-year-old Haziq, carrying longer odds than the two men ahead of him, is getting stronger. A win in China has been his only podium of the season, but he could pull off the title if Akid and Kyle have disappointing results in Thailand.

However, the main contenders face another dozen riders all capable of climbing the podium. They range from seniors like Ahmad Fazli Sham and Affendi Rosli to Indonesian teen sensation, Aldi Satya Mahendra and a whole load of tough, talented racers in between, like former champions, Wahyu Aji Trilaksana and Gupita Kresna, then Wawan Wello, Peerapong Luiboonpeng, Fernando Masato, Amirul Ariff Musa, Izzat Zaidi, to mention a few.

Ear defenders will be in order from 8:30 on Friday morning, when the single cylinder bark of the underbones gets ARRC Round 7 underway. All the action will be streamed live throughout the weekend. Races will be televised on Fox Sports Asia, Astro Arena and iNews.