It was a perfect Saturday for Honda Asia Dream Racing with Showa’s Zaqhwan Zaidi. The Malaysian took pole position by a convincing 0.246s from ONEXOX TKKR SAG’s Azlan Shah Kamaruzaman with a lap of 1’35.714, while Yamaha Thailand’s Apiwat Wongthananon earned himself another front row start by qualifying third. Championship leader, Broc Parkes was fourth from Ratthapong Wilairot and Chaiwichit Nisakul, who out-qualified the much fancied Thitipong Warakorn. The former Moto2 rider was struggling under hard braking at the end of Chang International’s long straights and was having trouble holding his lines all around the circuit.

Zaqhwan stroked his way to an early lead into turn one, with Apiwat following closely. Azlan slotted into third before running wide at turn four, letting Thitipong through, who had made a strong start from row three. Apiwat slipped through on Zaqhwan at the end of lap one, before the Honda man took it back one lap later.

At the end of lap four it was Zaqhwan, Apiwat, then Ratthapong and Thitipong, who quickly got past the Yamaha rider. Azlan moved through into fourth.

The biggest collective sigh of the afternoon was heard on lap five as Broc made a rare mistake to go off and into the gravel at turn 12. Knowing there were at least a few points up for grabs, he muscled his Yamaha back onto the track and continued the race.

Thitipong’s handing problems appeared to get worse in the second half of the 13 lap race, but he hung on to the leaders even as he was passed for third place by Azlan. Apiwat continued to threaten Zaqhwan’s lead, while Azlan pressured him from behind. The Yamaha Thailand rider crashed on the last lap to promote Azlan to second and Thitipong to third. 12 second back from the front three, Chaiwichit took fourth with his best finish of the season.

Azlan’s second place and Broc’s twelfth means the Malaysian has shaved his points deficit to just three points. On today’s form, Broc will have his work cut out in race two. 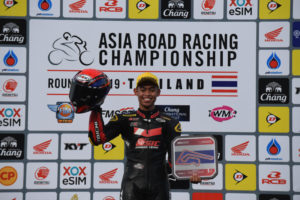 At the start Kasma Daniel converted his pole position in an early lead before being picked off by Peerapong, with Adam Norrodin and Afif Amran completing a group of four which quickly began to break away from the three Hondas of Andi, Azroy and Passawit.

On lap four out of 12, Kasma took the lead briefly, while Afif went wide at turn 3 and lost touch with the first three. Peerapong moved back to the front, but was unable to pull away as Kasma and Adam breathed heavily down his neck.

With five laps remaining, the AP Honda of Kritchaporn Kaewsonthi puffed out a plume of blue smoke and rolled to a halt.

As they began the final three laps, Kasma threatened more seriously and Adam closed up on his compatriot, just squeezing in front. On lap 11, Peerapong found himself unable to hold his line at turn three, which allowed Adam and Kasma even closer.

With apparent tyre issues, Peerapong got badly out of shape on the final lap, which allowed both Adam and Kasma through. He recovered quickly to re-pass Kasma at turn 12, but Adam had enough clear air behind him to hold on for his second win of the season.

Afif Amran completed a solid performance after his early mistake to finish fourth, 9.1 seconds behind the winner. Passawit won the battle for Honda pride from Andi and Azroy, while Malloy, Nazirul and Helmi Azman completed the top ten.

AP 250: Fadly makes a break for the title with race one win 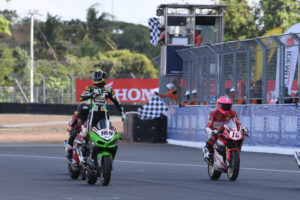 Muklada got away well from pole position to lead the first two laps with Piyawat and Tatchakorn in support and Fadly harassing the leading Hondas. Irfan was back in 16th in the early stages running behind his Astra team-mates, Lucky Hendriansya and Awhin Sanjaya who, along with Rafid, made his way towards the front of the group.

With five laps of ten complete, a few period of formation flying by Muklada and Piyawat came to an end when Rafid put himself between the two Thai riders and sized up race leader, Muklada. Fadly, meanwhile, moved into third and took a brief look at the front on lap seven.

As they got to the business end of the race, the three Hondas of Mukalada, Piyawat and Awhin exchanged red, while and black paint at the front, watched closely by Rafid and Fadly. Behind them Rey Ratukore moved up to sixth and Irfan claimed seventh place.

Muklada lost her support on lap eight, when Piyawat crashed, leaving Rafid, Awhin and Fadly to threaten the AP Honda ahead of them. At the end of lap nine, Muklada ran wide at turn 12, dropping herself to fifth, before slicing her way back to second, behind Awhin. Irfan tagged onto the back of the group and started to consider a podium finish. Fadly moved onto the back of Muklada’s Honda, followed closely by team-mate Aiki Iyoshi and Rafid.

At the final turn Fadly came through on the brakes, Awhin nudged Muklada into third in a photo finish and Rafid came in fourth. Irfan finished fifth in front of Tatachakorn, Iyoshi, Rey, Lucky and Cao Viet Nam, who was tenth.

Fadly’s win puts him 14 points clear of Irfan, while Awhin’s second place has earned him a second equaliser cut, which means the top three riders are all on 1,000rpm rev handicaps.

UB 150: title chase wide open with a DNF for Akid and a win for Fazli 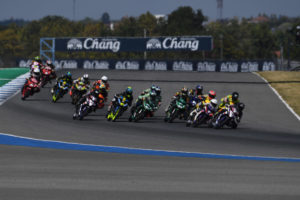 In the morning Superpole contest, Haziq Fairues (UMA Racing Yamaha Maju Motor Asia Team) came through with a lap of 2’02.470 to claim pole position from Wahyu Aji Trilaksana and Ahmad Fazli Sham. Akid Aziz, who broke his own lap record in Friday’s qualifying session, was fourth.

Fazli made a strong start to lead the field from the start. 13-year-old Aldi Satya Mahendra started well from ninth to move into the top five. The shock of the race came on lap three, when championship leader Akid broke down, leaving the door wide open for challengers, McKinley Kyle Paz and Haziq.

Wahyu Aji moved into the lead on lap four from Haziq and Aldi, but was unable to break the tow. One lap later and it was Haziq at the front and Kyle Paz joined the front part of the peloton. Wawan Wello was also having a good race, but broke down on lap 6.

Experience told on the last lap Fazli managed to make just enough of a break to hold the lead to the line and finish in front of Wahyu Aji, Fernando, Hafiza Rofa, Aldi Satya and Kyle Paz, whose sixth place was enough to give him a slender two point lead in the standings from the unfortunate Akid.