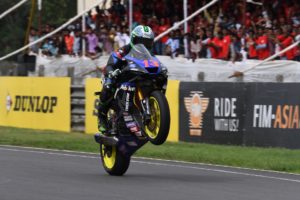 Anthony West made it a double today, taking a convincing win in Race 2 to dominate ARRC Round 4 at Madras Motor Race Track. In fact it establishes an unbeaten run in India for the Australian, as he won both races when the series went to Buddh Circuit in 2016 and then missed the trip to Chennai in 2017. In the other classes, Rafid Topan Sucipto scored his first win of the season and Ahmad Fazli Sham took another win for ONEXOX TKKR.

Webike Ikazuchi’s Anthony West overcame a fast starting Tomoyoshi Koyama to force himself into the lead in Turn 1 and set about building a comfy cushion to the race long battle for second that raged behind him.

Japanese home hero, Taiga Hada, riding for Idemitsu Honda Team India initially tried to chase down the leader, but got into a scrap with the Musashi Boon Siew Hondas of Koyama and Zaqwan Zaidi. As these three fought, not only was West able to stretch away, but Yuki Ito, a race winner last year, was able to catch up and latch onto them. Azlan Shah fought with Decha Kraisart behind them, until they were caught and separated by Hong Leong’s impressive youngster, Kasma Daniel Kasmayudin.

On the last lap Koyama led the group behind West over the bridge before the last turn, ahead of Hada, Zaqwan and Ito, when the Yamaha Racing Asean rider got out of shape trying to pass Zaqwan as they hit the brakes and got thrown over the high side, leaving his R6 in the middle of the track.

Azlan crossed the line three seconds further back in 6th, while Kasma Daniel was seventh from Decha, Ratthapong, Ahmad Yudhistira and Keminth Kubo.

Azroy Hakeem Anuar crashed out on the first lap, along with Patrick Li, while Andi Farid Izdihar made it around only one more time before joining them in the grass. Ramdan Rosli went down on Lap 5 and Joe Francis appeared to have electronic problems all the way through before pulling in on Lap 12. 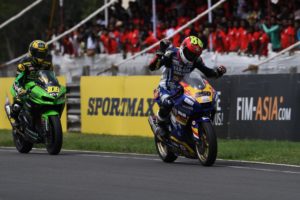 After five straight wins, Rheza Danica Ahrens crashed out of contention for points on Lap 3, closely followed by his Astra Honda team-mate, Mario Suryo Aji. That left Yamaha Thailand’s Anuparb Sarmoon, sitting behind the two Indonesians in the title chase with an opportunity to make a fight of it on the ladder. He fought hard, but not quite match Rafid Topan Sucipto for Yamalube KYT and Andy Fadly, who pushed racecraft to the limit at the final turn by leaning hard on Rafid, while Anuparb watched behind. Rafid pushed back at the Kawasaki rider and held his advantage to take his first win of the season. Fadly came through to second place from Anuparb, who was three tenths clear of Rey Ratukore, who had another good ride into fourth ahead of Peerapong Boonlert and AP Honda Thailand’s debutant, Tatchakorn Busari. Full results here. 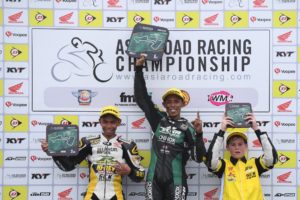 The leading group from the start quickly splintered in Race 2, as Saturday’s winner Ahmad Fazli Sham and championship leader, Helmi Azman got away from the main group of Affendi Rosley, Peerapong Luiboonpeng, Adib Rosley and 14-year-old Travis Hall.

As Fazli and Helmi got away, the second group distilled down to Affendi, Peerapong and Hall, who moved confidently ahead of his experienced rivals on the penultimate lap. As Affendi and Peerapong tried to get through for the final podium position, they tangled and fell hard at the back of the circuit, leaving the young Australian to score a stunning third place for SCK Hi Rev Honda. Adib Rosley was a further 5 seconds back in fourth from Aiman Azman, Izzat Zaidi and Wahyu Aji Trilaksana. Full results here.