The historic ASBK-ARRC double-header came to a close today with more drama, attrition and ultimately glory for the series and its winners at The Bend Motorsport Park on Sunday afternoon. 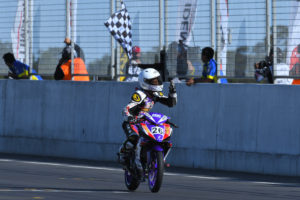 In a race full of surprises, Haziq Fairues took a convincing win in Underbone 150cc Race 2 at The Bend Motorsport Park on Sunday. In doing so he headed a podium lockout with UMA Racing Yamaha Maju Motor Asia team mates McKinley Kyle Paz and Akid Aziz.

The 17-year-old Malaysian made the most of starting from the outside of the front row to slot in behind the SCK Rapido Hi Rev Honda of Helmi Azman as the field went into Turn 1, the two of them immediately putting daylight between themselves and the chasing group. Working together, the two riders kept up the pace and had built up a lead of four seconds by the end of lap three. UMA Racing’s Filipino wildcard, McKinley Kyle Paz, spearheaded the chasing group, hounded by Affendi Rosli, Wahyu Aji Trilaksana, Gupita Kresna and others.

On lap four, 2016 champion, Wahyu Aji, went down after clipping the rear wheel of Akid Aziz , before straightening his handlebars and rejoining the race, eventually finishing 13th.

Helmi’s excellent weekend came to a halt along with his motorcycle on lap five when his engine let go, leaving Haziq to manage the lead for the remaining two laps to give himself a winning margin of 6.2 seconds. McKinley broke free as the rest of the pack leaving defending champion, Akid Aziz to fight off Yamalube SND’s Syahrul Amin and Gupita Kresna to win an historic 1-2-3 for UMA Racing.

Team One for All’s Affendi Rosli finished sixth from Race 1 winner, Izzat Zaidi, who now heads the championship with 67 points to Helmi’s 56. Affendi moves to third with 44 points, three points ahead of Syahrul and Akid.

Australian wildcard, Travis Hall, followed up his ninth place on Saturday, with a fighting 10th place in Race 2. 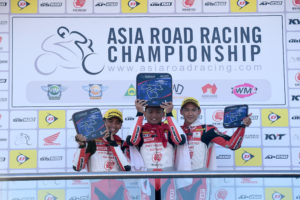 Indonesia’s Astra Honda completed a memorable weekend in South Australia for their AP250 team by converting their perfect front row into a perfect podium.

Rheza Danica Ahrens made a perfect start from pole position and literally never looked back to complete his first ever double win of the weekend. His 14-year-old team mate, Mario Suryo Aji, was slow off the grid and was lucky to stay upright as he clattered into Rafid Topan Sucipto in Turn 1, running wide and giving himself extra work to get back into contention from the middle of the pack. By lap 3, ‘Super’ Mario had clambered back up second position and put the hammer down to get clear of an intense 10 bike battle. Anuparb Sarmoon, Rafid Topan, Andy Fadly and then Awhin Sanjaya took turns to lead the fight for third, before Muklada Sarapuech forced her way to the front and made a break for the final place on the podium, following a crash at Turn 1 on the eighth lap by Anggi Setiawan.

Fate took a hand when track marshals were not able to clear Anggi’s bike out of harm’s way and the red flag came out to stop the race. Positions were counted back to the end of lap 7 and, as more than two-thirds of race distance had been completed, results were declared, depriving Muklada of a likely third place and dropping her back to sixth, behind Awhin, Anuparb and Fadly. Ahmad Afif was seventh and Rafid Topan, Peerapong Boonlert and Krithaporn Kaewsonthi completed the top ten.

The results at the end of ARRC Round 2 leave Rheza on top of the championship ladder with 73 points, from Mario’s 66 and Anuparb’s 62, with Muklada a further one point behind her Thai compatriot. 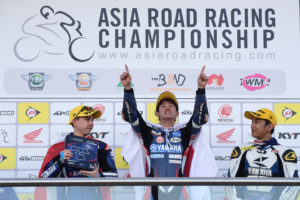 Yuki Ito, who had been the first the ARRC’s Supersport contingent to learn the fastest way round The Bend’s 4.95km track layout, took a fully justified victory in Race 2 on Sunday.

There was a lot of pride at stake and tension on the grid after two red flags on Saturday had led Race 1 to be abandoned. Casualties from the previous day’s wreckage unable to make the start were Decha Kraisart and Broc Pearson, whose positions were filled by the riders who qualified behind them.

Yamaha Racing Asean’s Ito led the field into Turn 1, chased by Idemitsu Honda’s Taiga Hada, Yamaha Thailand’s resurgent Ratthapong Wilairot and Hong Leong Yamaha’s Kasma Daniel Kasmayuddin. A tense fight for supremacy was shorted, when Astra Honda’s Irfan Ardiansyah crashed at Turn 10 and the red flag was shown when marshals and paramedics were unable to get the bike and rider to safety in time.

The restarted race, to be run over eight laps, was led away by Kasma from Ratthapong and Ito, who had swapped places by the end of lap 1. Kasma’s moments  of glory ended on the third lap when he ran off the track and the rest of the pack swept past him.

Ratthapong was slightly off the pace of the leading Yamaha and ran out the rest of the race to claim his first podium in the class with a fine second from Ramdan Rosli, who made it a Yamaha 1-2-3 on the Hong Leong YZF-R6. 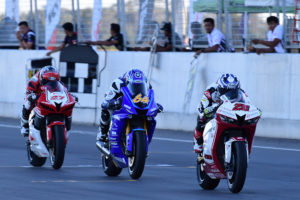