Yuki Ito led both Free Practice sessions on Day 1 of ARRC Round 2, clocking 1:59.342 in the morning before knocking a further two seconds off in the afternoon at The Bend Motorsport Park.

In the morning he was chased by British Supersport rider, Joe Francis, who is standing in for Anthony West, having flown to Australia after racing at Brands Hatch on Sunday, and Ahmad Yudhistira, who was also quick to learn the circuit. Meanwhile, other championship contenders focused on getting the set-up right for the new circuit and learning how to deal with the tyre wear being inflicted by the fresh asphalt.

Speaking after Free Practice 2, wildcard, Broc Pearson said, “I’m really happy with the result in the practice session today. To finish fourth out of practice is great, as we are getting extra track time ahead of my ASBK races, as that’s my championship. I’m stoked with that result to be in fourth against some of the best riders in the world, but this is only the first day of four, so we need to keep our momentum till Sunday.”

Tom Toparis, who currently leads the ASBK 600 championship, added, “It’s definitely different, these guys are really good, and they have picked up the new circuit so quickly. I’m finding the new tyres really different compared to the Pirellis I use in the Kawasaki Supersport 600 class. We are learning every lap and gaining great experience as we look to push up the leader board, but it will be interesting to see how we stack up after tomorrow.” 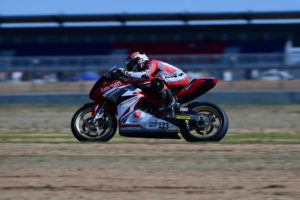 In a day given over largely to track familiarization, sprocket and suspension settings, Factory supported Hondas from Indonesia and Thailand came away with an edge over the rest at The Bend Motorsport Park.

AP Honda’s Muklada Sarapuech finished Free Practice 1 on top with a 2:09.177 after putting in 13 laps in 30 minutes to finish more than half a second clear of ahead of Rheza Danica Ahrens and Mario Surio Aji. Manual Tech KYT Kawasaki’s Andy Fadly was fourth and Yamaha Thailand’s Anuparb Sarmoon fifth.

The same three riders topped the second session, though in a different order, this time with Rheza, Mario and Muklada, who put in another 12 laps to make herself the busiest AP250 rider of the day. They were the only three riders to break into the 2:08s. Anuparb was just behind on the day, on 2:09.014, half a second clear of Andy Fadly, while Yamaha Indonesia’s Richard Taroreh jumped up to sixth. Of the main fancied runners, Rafid Topan was not among the leaders today, managing only a 2:13, while wildcard, Zac Levy was 20th overall.

Australia’s newest circuit has clearly made an impression on Muklada. “It is so far and so fast! I am tired, but really pleased how we went today. There are some changes we can make before tomorrow that will improve our times further.” 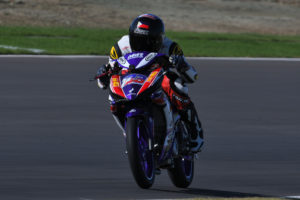 In the first ever track outings in Australia for the ARRC Underbone 150cc class today it was the wildcards who attracted the most attention at The Bend Motorsport Park.

In the first session 13-year-old Travis Hall got straight to work, putting in a best lap of 2:20.316 on the immaculate SCK Rapido Hi Rev Honda before taking a tumble, which shortened his outing. That was good enough to place him fourth, just behind his two team mates, Fakhrusy Syakarin and Helmi Azman, who won the first race in Buriram last month. In the main, it was a case of finding their way round for most of the field.

As many expected, Wahyu Aji Trilaksana responded to the disciplinary disappointments of Round 1 by topping the first session with 2:18.922, which was 0.793 faster than Helmi in second.

After missing the first session completely, Filipino wildcard, McKinley Kyle Paz grabbed the limelight by recording the fastest time of the day on his third lap, with a 2:18.393 in free Practice 2.

A few patterns began to emerge among the series regulars in the afternoon. Yamaha Indonesia’s Wahyu again showed good pace, lapping in the 2:19s, while Helmi dipped into the 1:18s after making more changes. 2017 champion, Akid Aziz put in only three laps, but got into the 2:19s, as did Round 1, Race 1 winner, Izzat Zaidi. Travis had a quieter session after the fall in his first outing, taking time to learn more about the bike and putting in 13 laps in the 30 minute session. The other wildcard, Locky Taylor found his Yamaha underpowered, as evidenced by a lowly 153kph through the speed traps, compared to 170kph being achieved by Helmi, on the fastest machine.