Much cooler conditions prevailed on Sunday for the second races of round two, with ambient temperatures edging up to 19 degrees with track temperatures just a few clicks above that. Nevertheless, large crowds packed into The Bend Motorsport Park to catch the final day of the ASBK/ARRC double-header.

After losing grip at around half distance while in the lead the day before, Broc Parkes worked with his Yamaha ASEAN Racing team to recalibrate the bike and rider for race two. Bryan Staring, whose Kawasaki Thailand ZX10RR had performed flawlessly to take the race one win, realised his Australian rival was likely to be much closer in race two and that the regular Asian riders would be building on what they had learned the day before.

Staring had another perfect launch from the middle of the front row to take the lead at the start. Yamaha Thailand’s Apiwat Wongthananon got away well to the right of the Kawasaki and slotted in behind him. As the front of the pack shuffled itself into shape, Broc Parkes moved into third and these three began to put daylight between themselves and Zaqwan Zaidi, who led a chasing group that also included the ONEXOX TKKR SAG BMW of Azlan Shah and the Yamahas of Yuki Ito and Ratthapong Wilairot. TJ Alberto and Kazuma Tsuda crashed at turn two and took no further part.

As the first half of the 12 lap race approached, Apiwat was passed by Parkes and began to slip back towards Zaqwan, who was himself under pressure from Azlan Shah and Yuki Ito. After watching the back of the black Kawasaki for a few laps, Parkes made his move and slipped into lead on lap 10. Staring stayed close, taking his turn to follow and watch. Apiwat was passed by Zaqwan, Ito and Azlan, which left the two Yamaha Thailand riders in sixth and seventh. Ito got himself through to third, leaving Azlan and Zaqwan to dispute fifth.

The game of cat and mouse at the front came to an end as Parkes and Staring began lap 11, with both riders pushing hard. Parkes lost the front twice in his efforts as Staring kept the pressure on. The Yamaha rider pulled just enough of a gap on the last lap to put the win out of reach and crossed the line with a winning margin of almost half a second. Ito took his second third place of the weekend, 1.4 seconds further back and eight seconds clear of Zaqwan, whose Asia Dream Racing Honda overcame the BMW of Azlan. Apiwat and Ratthapong held on for sixth and seventh. Yudhistira, Chaiwichit and Farid completed the top ten.

The 45 points collected by Broc Parkes over the two races put him on 72 points, 11 clear of Zaqwan, who now has 61. Azlan, Staring and Apiwat are on 47, 46 and 44, while the injured Thitipong has slipped from first to seventh and sits on the 40 points he collected in round one. Full results here. 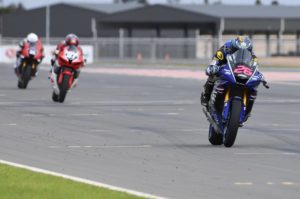 Supersport 600: an in-line four for Peerapong

As commentators struggled to find new superlatives for the performance of Peerapong Boonlert, Yamaha Thailand’s latest Supersport superstar, the rider himself calmly clicked the dial to rinse and repeat and delivered another perfect race, despite coming under more pressure today.

Another perfect start from the centre of the first row got the imperious Thai the hole-shot he wanted, as an injured Helmi Azman snapped at his heels through the first few turns. Azroy Anuar followed his Musashi Boon Siew team-mate, before passing him for second. Meanwhile SIC TK’s ‘super-sub’, Ibrahim Norrodin, recovered from an indifferent start and moved past the two Malaysians as Peerapong attempted to escape. Ibrahim closed in on Peerapong and chased him hard for a few laps as the Astra Honda of Andi Farid Izdihar also passed Helmi and Azroy and got through to third. Hong Leong Yamaha’s Afif Amran, meanwhile, was having another good outing, coming through from his third row start and also passed Helmi and Azroy. The star of race one, Javier Malloy and Kritchaporn crashed out on lap one.

Peerapong didn’t flinch under the pressure and kept going as Ibrahim tried to find a way to get close enough to pass, but found himself increasingly engaged in a battle with Andi for second place. The leader stretched his margin over the last two laps to finish almost a second clear of Andi, who won the contest for P2, while Ibrahim was third, ahead of the impressive Arif. Azroy was sixth and Helmi, Passawit, Rheza, Fakhrusy and Akid Aziz completed the top ten.

Peerapong’s four-from-four give him a perfect score after two rounds of 100 points, which is a margin of 51 over his nearest rival, Andi Farid Izdihar. With the next round at the leader’s home track in Buriram, a straight six is easily foreseeable. Full results here. 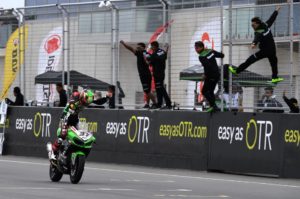 Aiki Iyoshi built upon the promising start he made in Sepang in ARRC round one and an inspired second place yesterday, behind his team-mate, Andy Fadly, by taking a convincing win in race two.

Pre-race chatter had centred on Fadly, whose win had taken him more than 25 points clear of the fifth-placed rider in the championship standings, thereby triggering a cut of 500 rpm in his maximum rev limit under 2019 technical regulations. What effect would that have on the performance of his Manual Tech KYT Kawasaki?

There was no answer in warm-up, as the 19 year-old Indonesian posted the fastest time and no clues were forthcoming in the race, as Fadly highsided out at turn one, lap one.

In the final few laps Iyoshi got himself to the front and engaged Mukalda and Tatchakorn in a contest for first place. As it became clear that the pace of the Kawasaki was beyond the following Hondas, the Japanese rookie consolidated a lead of a few bike lengths as Muklada, despite struggling with a worsening chatter problem, kept unrelenting pressure on the race leader.

The jubilant Japanese took the chequered flag by a margin of more than a second from Muklada, who had a similar gap back to Tatchakorn. Fourth place went to Astra Honda’s Lucky, who had a 4.5 second buffer back to Rey Ratukore, who was again the best Yamaha rider. Irfan Ardiansyah was sixth from Awhin Sanjaya, Izzat, Piyawat and Muzzakir who was tenth.

Aiki Iyoshi’s maiden win has earned him the championship lead and a cut of 500 rpm in his rev limit, as his points total of 68 is 30 points clear of Awhin in fifth position. With three long straights at Buriram, the answer to the question about the effect of the new rule should become clear in round three. Full results here.