The pace advantage enjoyed by Yamaha Racing Asean’s Broc Parkes during this week’s official test shrank to a few hundredths in Free Practice today, as Azlan Shah Kamaruzaman continued to get the measure of his ONEXOX TKKR SAG BMW. 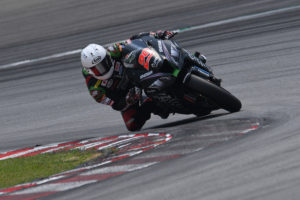 Azlan posted his best time of the day in FP1, being the first rider to dip below 2:06 with a lap of 2:05.688. Although Parkes topped FP2 after a tumble by Azlan, it was not until the final outing of the day until the Australian edged back to P1 by clocking 2:05.608.

Thitipong Warakorn performed well for Kawasaki Thailand to finish the day in third place, while his long-time Thai sparring partner, Apiwat Wongthananon, improved through the day to record 2:06.387, which was good enough for fourth. Rider of the day, though, was arguably Ahmad Yudhistira, who showed strongly in each session to end up fifth on Victor Racing Team’s privateer Yamaha.

Zaqwan Zaidi toiled hard all day for Honda Dream Asia to finish sixth from an out-of-sorts Yuki Ito, Ratthapong Wilairot, Farid Badrul Hisham on the second ONEXOX BMW and Chaiwichit Nisakul. Timothy Joseph Cua Alberto was the better of the two Acces Plus Ducatis, while Victor Racing stand-in rider, Rajini Krishnan managed a best lap of 2:09.978 to leave the second Ducati of Jonathan Serrapica in 13th.

SS 600: Peerapong stays ahead as locals take up the chase 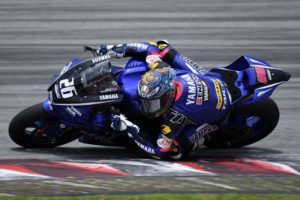 Like other riders on the first day, Yamaha Thailand’s Peerapong Boonlert made the best of cooler conditions in FP1 to post a time of 2:10.610 that kept him clear of a determined group of Malaysian riders who were able to edge closer to the two-times Suzuka 4 Hour winner as the day went on.

It was SIC Junior Team’s local hero, Adam Norrodin who got closest with 2:10.934 that put him top in FP3. Next best overall was Ramdan Rosli on 2:11.0027, who finished ahead of Azroy Anuar, Kasma Daniel Kasmayudin and the much fancied Helmi Azman, who found himself sixth at the end of the day, just in front of Astra Honda’s Andi Farid Izdihar.

With seven riders within one second of each other around Sepang’s 5.542 kilometre full circuit, qualifying tomorrow morning and Race 1 in the afternoon both promise some close battles. 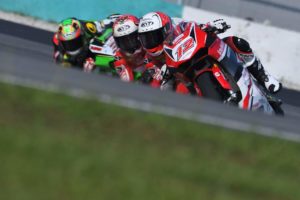 Nobody told Astra Honda’s latest prodigy, Lucky Hendriansia, that ARRC’s AP 250 is one of the hardest fought classes anywhere in the world.

At the start of his first outing in the series, the young Indonesian finished ahead of such highly rated riders as Andy Fadly and Muklada Sarapuech, as well as his two team-mates, Irfan Ardiansyah and Awhin Sanjaya.

Lucky set his best time of 2:25.530 in the relative cool of the first morning session, just ahead of Irfan, Muklada and Fadly, who topped FP2 with a time of 2:25.617. The pace of these four was around half a second beyond the chasing pack which was led by Fadly’s Manual Tech KYT team-mate, Aiki Ayoshi, another rider who is making an impressive debut. Just behind the Japanese rider was Awhin and, impressively, Sethu Rajiv, who is finding some form at the start of his third season in the class for Idemitsu Honda India. Rajiv was seventh on combined times, ahead of Rey Ratukore, Muzzakir Mohamed and Yamaha Thailand’s Suttipat Patchaeetron. 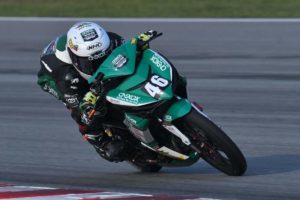 There were 34 machines on track for UB 150 practice and qualifying today in a swarm of talented riders made up of old hands like Ahmad Fazli Sham and Affendi Rosli right through to early teenagers like Gun Mie and Travis Hall.

2017 champion, UMA racing Malaysia’s Akid Aziz, who had been quickest in this week’s pre-season test, had mechanical problems in FP1, but claimed back the top slot in the second session with a best lap of 2:32.738, which was a mere six hundredths clear of his Filipino UMA counterpart, McKinley Kyle Paz. Other riders with good pace included Indonesia’s Aldi  Satya Mahandra, Affendi, Fazli Sham, Fernando Masato, Haziq Fairues, Wahyu Aji Trilaksana, Izzat Zaidi and Aiman Azman.

With just 15 places on offer for tomorrow morning’s all-important Superpole, competition was fiercer than ever in qualifying, with the aforementioned riders all featuring on the first page of the timing screens. In the end it was the wily Fazli Sham who came out on top for ONEXOX TKKR SAG, clocking 2:32.984, which was 0.229 faster than Aldi, who was next best. Wahyu Aji was third for Yamaha Racing Indonesia ahead of Fernando Masato, Akid and Kyle Paz. SND Factory Racing’s two-times champion, Gupita Kresna, qualified 15th and will be first away for Superpole at 10:20 local time on Saturday.