Azlan Shah Kamaruzaman made a determined start to his challenge for the first ever ASB 1000 title on Friday, spending the day joyfully wringing the neck of the ONEXOX TKKR SAG BMW. When it mattered, with 8 minutes left in FP3, he dipped towards the 1:35s to clock the best time of the day at 1’36.123. Sensing that it was enough to give him the psychological edge, he headed for pit lane. Yamaha Racing ASEAN’s Broc Parkes responded to push Zaqhwan Zaidi’s Honda Asia Dream Racing with Showa CBR1000RR to the outside of the provisional front row.

While these three grabbed the attention, Yamaha Thailand’s Apiwat Wongthananon also had a good day, snapping at the men ahead to finish within five hundredths of Zaqhwan on 1’36.597.  Thitipong Warakorn, who was out injured for round three at Chang International, was fifth and the last rider in the 1’36s. Ratthapong Wilairot, Chaiwichit Nisakul, Yuki Ito, Ahmad Yudhistira and Ducati Philippines stand-in Frederico Sandi completed the top 10.

Adam squeaks in front on day one 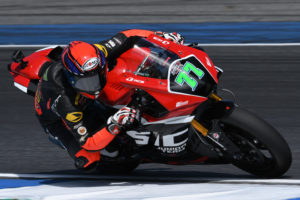 Despite the first two places in the 2019 Supersport 600 championship having been tied up, aggregate lap times in free practice were around half a second faster than at round three, six months earlier.

Yamaha Thailand’s newly crowned champion, Peerapong Boonlert, was the only man to get into the 1’39s in FP1, leading Hong Leong Yamaha’s Kasma Daniel Kasmayudin in the first two sessions.

It was not until the afternoon session that SIC Junior ZK’s Adam Norrodin showed his hand, blasting through with a 1’38.983 to go just over a tenth clear of Kasma and Peerapong. Kasma’s team-mate, Afif Amran, again showed that he is one to watch by coming through to fourth with a 1’40.367 ahead of Andi Farid Izdihar on the best of the Hondas. 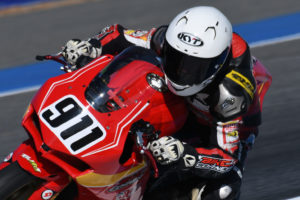 Rafid Topan Sucipto continued with the flying form he has shown since his mid-season switch from Yamaha to Honda with the privateer Bike Corner SYS KYT team, keeping three very fast AP Honda riders off the top of the time sheets. The second session was so close that measuring thousandths of a second wasn’t enough to separate Rafid and Muklada Sarapuech, who both recorded 1’53.725.

In the third and final session, Rafid pulled his time down to a day’s best of 1’53.039 and AP Honda’s Piyawat Patoomyos, on 1’53.157, put himself 33 thousandths in front of Muklada and a further six tenths clear of Tatchakorn Buasri. Rey Ratukore, on the ONEXOX TKKR SAG Yamaha was fifth from Manual Tech KYT Kawasaki’s Aiki Iyoshi. The Japanese rider recorded 1’53.813, which was six thousandths faster than his stablemate and championship joint leader, Andy Fadly. Next up were the three Astra Hondas of Awhin Sanjaya, joint leader, Irfan Ardiansyah and Lucky Hendriansya. With Irfan and Fadly carrying a 1000rpm rev cut ‘equaliser’ tactical racing will be very much in evidence this weekend. 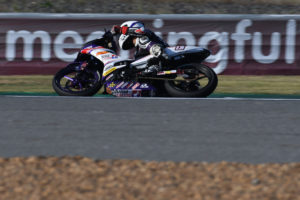 Championship leader, Akid Aziz, made his intent crystal clear today, breaking his own lap record by almost two tenths of a second to stop the clock at 1’59.784 on the UMA Racing Yamaha.

ONEXOX TKKR SAG’s Ahmad Fazli Sham was also fast all day and dipped under the old lap record to end up in provisional second place. Rozaiman Said was next up on 2’038 in front of the All for One Yamaha of Affendi Rosli and Akid’s team-mate and title contender, Haziq Fairues. Wahyu Aji Trilaksana was sixth from Amirul Arif Musa and McKinley Kyle Paz, who lies just eight points behind Akid in the standings.

The top fifteen go through to tomorrow morning’s Superpole contest for the first fifteen grid places. 13 year-old Aldi Satya Mahindra was the last rider to make the cut.