The strong winds that prevailed during practice and qualifying blew away the clouds and cold weather at Tailem Bend and left the combined ASBK and ARRC paddock with clear skies and warmer track temperatures to enjoy for the first races. It was a day when replacement riders made the most of their opportunities with some outstanding performances.

Patience pays off for stand-in Staring

It was Staring who got the best drive at the start to lead into turn one from Parkes, Zaqwan and Apiwat. His bold attempt to get away was quickly closed down by Parkes who got past him a lap later and opened up a comfortable gap of this own, which he had extended to 1.5 seconds by the end of lap four. Staring kept a good distance between him and third-placed Zaqwan, who beat off a challenge from Apiwat, Azlan and Yuki Ito.

The soft rear Dunlop of the leading Yamaha began to lose grip shortly before half of the 12 laps were done, which allowed the Kawasaki stand-in to reel him him back in. Staring made his move on lap eight with a well-planned move that saw him pull out of Parkes’s slipstream as they got to the braking zone at the end of the one kilometer straight and go cleanly past  at turn one. The Yamaha rider had no answer and Staring opened up a gap that had stretched out to more than two seconds at the end.

Behind the two Australians, Zaqwan forged himself a comfortable slot in third place ahead of Ito, who was coming through strongly after passing Azlan for fourth. Then it went wrong for the Honda Asia Dream pilot, as his machine slowed during the last two laps. Ito pounced on the opportunity for the final spot on the podium, while Zaqwan held on for fourth. Azlan finished fifth from the Yamaha Thailand pairing of Apiwat and Ratthapong Wilairot, while Ahmad Yudhistira, Chaiwichit and Farid Hisham completed the top ten.

Parkes’s second place lifts him to the top of the standings with a total of 47. The absent Thitipong is now second with 40, while Zaqwan is on 38, Azlan on 36 and Ito has 34. 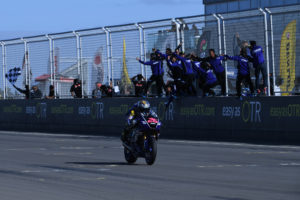 Peerapong makes it three out of three

Yamaha Thailand’s Peerapong Boonlert delivered a masterclass to his Supersport 600 rivals this afternoon at Tailem Bend by taking his third win from three starts in the class. What he showed them was how to win a race from the front with his deceptively fast, smooth style of riding.

Behind the flying Thai spectators were treated to a race long, enthralling battle between poleman and SIC TK Racing’s ‘super-sub’ Ibrahim Norrodin, Musashi Boon Siew Honda’s Azroy Anuar and another replacement rider, who would go on to steal the show, Victor Racing’s Javier Orellana Malloy.

Helmi Azman, nursing a sore ankle after a heart-stopping highside in qualifying, featured prominently in the scrap for second until he went over the top of his Honda again on lap six. Thankfully the tumble he took didn’t exacerbate the knocks he took the previous afternoon and he managed to nurse the bike back to pit lane unaided.

Javier, having started missed two practice sessions after a crash on Thursday, quickly found his rhythm and wasted no time moving up from the fourth row into the battle for second and looked increasingly convincing as the 10-lap race went on and the fairytale switched from being about Ibrahim’s spectacular substitution for his older brother to Javier’s charge for glory for the privately run Victor Racing Team. As the final lap got underway and with Peerapong two seconds clear at the front, the three men behind him swapped positions at every turn, until Javier got past Ibrahim in sector four and got just enough of a gap to carry him to the line. Azroy also got through, leaving Ibrahim off the podium in fourth.

Peerapong’s perfect start to the season has netted him 75 points, which is a stunning 37 points clear of Azroy and 39 ahead of the absent Kasma Daniel Kamayuddin in third. Full results here. 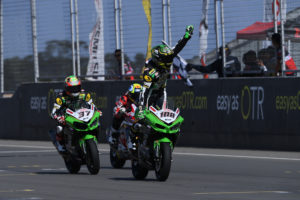 The Bend Motorsport Park will hold a special place in the heart of Andy Fadly. The 19-year-old Indonesian came of age with his first podium in the series at the South Australian circuit one year ago and scored his first win there today.

Manual Tech KYT’s Fadly was pushed all the way by his rookie team-mate, Aiki Iyoshi and AP Honda’s Muklada Sarapuech. These three left the rest of the field trailing and provided edge-of-the-seat entertainment for the full nine laps of race one. In end a slight mistake by Muklada was enough for the two Kawasakis to cross the line just ahead of her. More than 10 seconds further back, Tatchakorn Buasri was fourth from Rey Ratukore and Piyawat Patoomyos. Irfan, Muzzakir, Izzat and Sethu Rajiv completed the top ten.

Fadly’s win followed two second places in round one and gives him points haul of 65, which is a lead of more than 25 points over third-placed Muklada, Lucky Hendriansia in fourth and Awhin Sanjaya in fifth. Under new rules tied to the single ECU introduced in 2019, that points advantage means a cut of 500rpm to Fadly’s rev limit and therefore makes tomorrow’s race two still more unpredictable. Full results here.