Final round passion simmered among all classes on day two of the ARRC Grand Finale as qualifying sessions and first races kept spectators and race officials up on their toes at Chang International Circuit.

Yamaha Thailand’s Ratthapong Wilairot, who started the day needing a double win to take the 2018 Supersport 600 championship, carried the strong form he showed on Friday through to Qualifying and took pole position with a best lap of 1:38.903. His team-mate, Decha Kraisart and Yamaha Racing ASEAN’s Keminth Kubo, stayed within four tenths of Ratthapong to make a solid blue line at the front of the grid. Manual Tech KYT Kawasaki’s Ahmad Yudhistira, showed good pace, edging World Supersport star, Randy Krummenacher into the middle of row 2 ahead of Musashi Boon Siew Honda’s Tomoyoshi Koyama, whose team-mate, Zaqwan Zaidi, leads the third row. Azlan Shah Kamaruzaman, needing 34 points to overhaul Anthony West’s championship lead, was only eighth fastest on 1:39.606. Behind him, Keisuke Kurihara, Sheridan Morais, Sitthisak Aonchaweang, Yuki Ito, Zulfahmi Khairudin and Passawit Thitiwararak, completed a group of 14 riders who got within one second of Ratthapong’s time.

Decha Kraisart made the best start from the middle of row one to lead the first lap from Ratthapong Wilairot, Ahmad Yudhistira and Keminth Kubo. Azlan Shah made a good start from the third row and slotted into fifth in turn one only to get pushed into the run-off area at turn three as Zaqwan Zaidi low-sided into him. The 2017 champion stayed upright, but was in last place by the time he made it back between the white lines.

With Decha and Ratthapong formation flying at the front, attention focused on the fight for third between Yudhistira and Kubo. The 19-year-old Thai got through on lap six, only to forfeit the place again to the Kawasaki. As they fought, Tomoyoshi Koyama began to reel them in.

Ratthapong got past Decha on lap 10. Mindful of championship positions, Decha tucked in behind his team-mate and managed a gap of almost five seconds back to Yudhistira who, after half distance, had the pace to manage his margin over Kubo.

Azlan, meanwhile, charged his way through the field, working his way back up to seventh by lap 14, dragging Andi Farid Izdihar with him, who had started from 15th on the grid.

At the end, Ratthapong and Decha stayed in formation to cross the line 1.3 seconds apart and more than five seconds clear of Yudhistira. Kubo just got the better of Koyama to seal fourth and Keisuke Kurihara was sixth on the road, despite going off track at the last turn. Azlan was seventh from Andi Farid, Yuki Ito and Azroy Hakeen Anuar, who completed the top ten.

Ratthapong’s 25 points give him a total of 116, compared to West’s 136, while Yudhistira on 115 can also claim the title by winning race two. 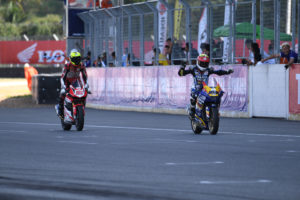 Rafid Topan Sucipto made experience count in a bruising AP 250cc race 1, staying within striking distance of the front of the leading group throughout the 10 lap race and getting clear of the inevitable last corner chaos to win his first race of 2018.

With the top 15 bikes within one camera shot for most of the race. In the early laps Kritchaporn Kaewsonthi, Anuparb Sarmoon, Andy Mohammad Fadly, Awhin Sanjaya and Muklada Sarapuech spent most time at the front until Anuparb seemed to lose his cutting edge and Fadly pulled into the pits with a nasty top-end rattle coming from his Kawasaki’s engine. Rafid, meanwhile, moved up to join the list of likely winners and Rheza Danica decided to get himself involved.

Muklada, clearly determined to make up for a season marred by race direction penalties and injury, increased an already formidable effort on the last two laps, swapped the first four places with Awhin, Rheza, Krithchaporn and Rafid, who led into the final turn. As they braked, Muklada hit Kritchaporn’s rear wheel, causing both bikes to go offline. They made contact again, and this time Kritchporn was unable to recover and crashed. Muklada lurched upright and clattered into Mario to make it a fourth successive DNF for the young Indonesian.

Race Direction took a dim view of the last corner pinball, disqualifying Muklada and handing her a one race suspension that will keep her in the garage for race two. That elevated Anuparb to third, meaning that there is a tight, three-way fight for second place in the championship, with Anuparb on 142 points, Rafid on 138 and Awhin on 137. Full results here. 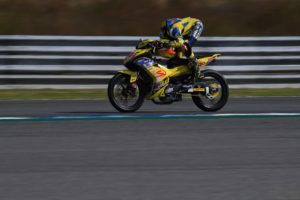 Wawan Wello continued his stunning debut at Chang International Circuit, winning the morning Superpole shoot-out to win a gripping race one today after spending most of the eight laps in the lead.

Attention inevitably focused on Helmi Azman, who started from 19th on the grid after a technical rule infringement in Qualifying. The 19-year-old Malaysian needed an eighth place finish to clinch the 2018 title in the event that closest rival, Izzat Zaidi, should win both races. To all appearances, he treated the challenge as a normal day’s work, moving straight into the leading group, and taking turns at the front as a typically fierce underbone riot raged around him.

Wawan and Affendi Rosli led the swarm into turn one, as Helmi sliced his way through to the top ten. Ahmad Fazli Sham showed well throughout the race, two times former champion, Gupita Kresna threatened and Reza Fahlevi, another Indonesian wildcard, had an impressive outing. Izzat Zaidi’s long-shot challenge for the championship didn’t materialise and he wasn’t able to get close to the front of the group. 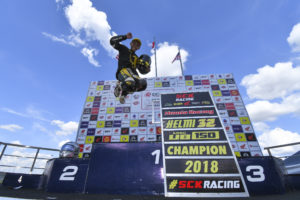