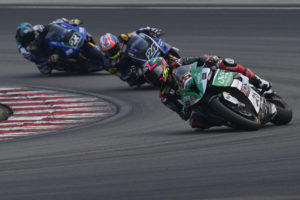 We saw the best of Azlan Shah Kamaruzaman and the ONEXOX TKKR BMW at Sepang this afternoon. The two times ARRC 600 champion kept himself within striking distance during the frantic early laps, made a decisive move into the lead on lap eight and never looked threatened thereafter.

We were also treated to the first ever sighting of a Ducati leading an ARRC race, thanks to a convincing performance by Italian wildcard, Frederico Sandi on the Access Plus Racing Panigale.

Apiwat launched his Yamaha perfectly from the outside of the front row. Zaqhwan chased him, followed by Sandi and Azlan. Zaqhwan took the lead into turn one on lap two, but canned his Honda and his realistic title hopes a few corners later. Frederico took his Ducati into the lead on lap three and, chased by Apiwat and Azlan, looked convincing until tyre wear ended his challenge on lap seven. Meanwhile, Thitipong Warakorn, still recovering from his back injury, worked his way past Broc Parkes and onto the rear of the front group as Azlan moved decisively into the lead. Yuki pulled off the track with a mechanical failure on lap nine.

As Frederico dropped back, Thitipong got close enough to make Apiwat’s second place look vulnerable. Azlan made himself comfortable at the front as the two Thai riders locked horns. Thitipong got into second on lap 11 of 12, only for Apiwat to sweep back past him. However, the Kawasaki Thailand man was not done and, going into the last corner wide and then cutting inside, out-dragged the Yamaha to the line one tenth clear of his compatriot and 1.4 seconds behind Azlan. Broc got the better of Frederico for fourth. Ratthapong Wilairot was sixth, 16 seconds behind the winner and six seconds in front of seventh-placed Chaiwichit Nisakul.

Azlan’s fourth win of the season and Zaqhwan’s DNF means that the ONEXOX TKKR SAG rider is now second in the standings on 168 points, 33 behind Broc, who is now on 201. 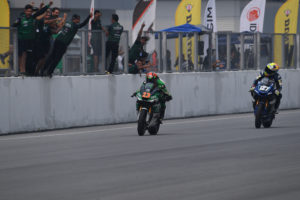 Peerapong Boonlert had a good day at the office. The 21-year-old Thai led most of the race, before easing off to avoid a last lap bare knuckle fight between Kasma Daniel Kasmayudin and Ramdan Rosli. His third place put the title out of reach of Kasma, his only theoretical rival, and Yamaha Thailand broke open a big box of pink 2019 championship tee-shirts.

In qualifying, Kasma kept the upper hand to set a new qualifying lap record with a time of 2:09.712 and looked strong from the start, getting away from ONEXOX TKKR SAG’s Ramdan and Peerapong. Andi Farid Izdihar crashed out on the first lap, leaving Azroy to lead a Honda-powered four-way fight for fourth in front of Astra Honda’s Rheza Danica Ahrens, AP Honda’s Passawit Thitiwararak and Azroy’s Musashi Boon Siew Honda running mate, Helmi Azman. Javier Orellana Malloy briefly moved up to join them on the Victor Racing Yamaha.

Peerapong moved into the lead on lap three and looked like he meant it, at one stage stretching his advantage to more than half a second. Ramdan and Kasma heard the alarm bell ringing and closed back up one lap later. With two laps remaining Kasma swept past Ramdan and Peerapong to grap the lead. As they began the tenth and final lap, Ramdan set his sights on Kasma and Peerapong dropped back as the two young Malaysians squared up.

As they came to the final turn, Ramdan went wide and, his R6 squirming on the front brake, switched to the inside of Kasma and got to the line 0.110s ahead while Peerapong cruised home to third place and the championship 3.5 seconds further back. Azroy held his best of the rest position to take fourth, Helmi narrowly got the better of Passawit for fifth, while Javier was sixth, 19 seconds behind the winner.

With the pressure of winning the championship lifted from his shoulders, it remains to be seen how hard Peerapong will take the fight to Sepang’s home heroes in race two tomorrow.

AP 250: Irfan sweeps to first win and title lead in race one 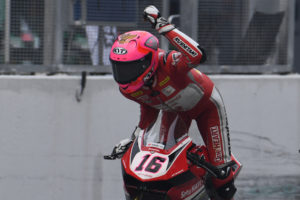 Irfan Ardiansyah again showed a potent combination of speed and intelligence in race one to take a brilliantly judged first win in one of the best AP250 races of the season.

Muklada Sarapuech got away well from her second Sepang pole position of the year, but was out-dragged by Andy Fadly into turn one, who led a nine-strong leading group. Awhin Sanjaya, along with Rafid Topan Sucipto, Lucky Hendriansyah, Piyawat Patoomyos, Irfan Hendriansiah and Rey Ratukore snapped and snarled their way up and down the front bunch. Less than a second separated these nine riders. Fadly ran wide on lap two, but quickly clawed his way back into contention.

On aggregate, AP Honda’s Muklada spent most time in the lead, while Irfan moved his way closer to the sharp end to join Awhin, Lucky, Rafid and Fadly in the scrap for first place. The Thai rider began the last lap in front and tried hard to break away. Awhin went with her and the rest of the pack caught up through the technical sections. Irfan made his move as they swept into the penultimate turn, getting good drive and braking into the last corner safely ahead. Behind him, five bikes fanned out in a line. Piyawat crashed and Muklada, Rafid and Awhin made the dash for the line, finishing within 23 thousandths of a second of each other in that order. Fadly was just a few hundredths further back in fifth, with Lucky close behind. Faerozi Toreqottulah was two seconds further back, finishing in front of Rey, Cao Viet Nam and Sutthipat Patchaeetron, who completed the top ten.

Irfan’s win puts him 58 points ahead of Lucky, who is fifth in the standings, so has earned himself a second ‘equaliser’ cut of 500rpm from the maximum rev limit for race two.

Underbone 150: Akid keeps his advantage to win race one 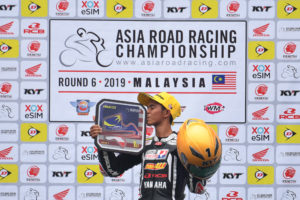 Starting alongside Izzat Zaidi and Haziq Fairues on the front row, Akid tracked Izzat’s red Yamaha, which fell back through the pack after a good early showing. As the leading pack shuffled itself into the final turn, Akid came through at the front to win from ONEXOX TKKR’s Wahyu Aji Trilaksana and Rozaiman Said.

The injured McKinley Kyle Paz was cleared to race and rode through from 35th place on the grid to sixth to keep himself within reach of the title. The Filipino is now second with 105 points, 11 behind Akid.