Two Malaysian riders on very different bikes and with very different styles took control of free practice. It was the smooth riding Zaqhwan on the Honda Asia Dream with Showa SP2 who ended up quickest on combined times after stopping the clock at 2:6.502 in Friday’s final session. The hard charging Azlan Shah on the ONEXOX TKKR SAG BMW led FP1 and FP2 and recorded his best time of 2:06.665 early in the day’s final session.

Italian wildcard, Frederico Sandi, made an excellent debut on the third Access Plus Racing Ducati, recording a best lap of 2:08.266 to end up eighth in front of team regular, TJ Alberto. Thitipong’s Kawasaki Thailand team-mate, Chaiwichit Nisakul, was tenth on 2:08.719, while Yamaha Thailand’s Ratthapong Wilairot had a quiet day lapping in the 2:09s and finished 11th.

Supersport 600: Kasma turns up the wick in free practice 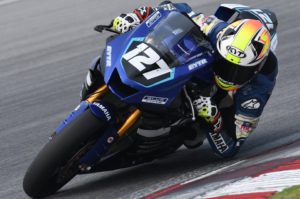 Hong Leong Yamaha’s Kasma Daniel Kasmayudin, continued the scintillating form he showed in the CEV Moto2 championship and the last ARRC round at Zhuhai by dominating all three free practice sessions and finishing the day with a margin at the top of six tenths. His best time of 2:10.113 was more than a second faster than he managed at round one in early March.

Azroy Hakeem Anuar rode out of his skin for Musashi Boon Siew Honda to end the day second on 2:10.753, which was two tenths faster than Astra Honda’s Andi Farid Izdihar. Runaway championship leader Peerapong Boonlert had a relatively quiet day, circulating at around one second off the pace to finish fourth, narrowly ahead of Ramdan Rosli. 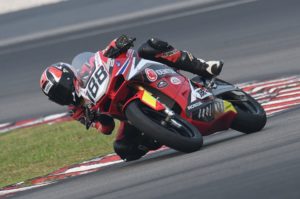 AP Honda Racing Thailand’s newest prodigy, Piyawat Patoomyos, showed that his third place finish in round five at Zhuhai was no fluke by setting the fastest time of 2:25.808 in FP2 on Friday. The Thai youngster, who wasn’t on the card for round one, hadn’t turned a wheel at the circuit until today. His team-mate, Muklada Sarapuech, who set pole position at Sepang in March, was 0.16 slower.

Irfan Ardiansyah, showed again what a threat he is for the 2019 title by slotting into third place in front of Andy Fadly, Rafid Topan Sucipto and his Astra Honda team-mates, Lucky Hendriansiah and Awhin Sanjaya. AP Honda’s Tatchakorn Buasri and Manual Tech KYT Kawasaki’s Aiki Iyoshi were ninth and tenth.

Based upon round one qualifying times, up a full second could come off on Saturday morning. 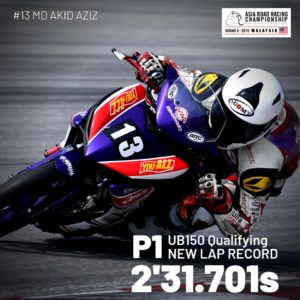 Akid Aziz put himself ahead of his UMA Racing Yamaha contemporaries from the Philippines – and the rest of the pack – with a stunning qualifying lap of 2:31.701 on Friday afternoon.

The anticipated rivalry between Akid and championship leader McKinley Kyle Paz ended in the second free practice session, when the Filipino went over the high side at the last corner. The resulting ankle injury left Kyle Paz sidelined for qualifying.

SND Factory Racing’s Wawan Wello, who suffered two DNFs at Zhuhai, made his intentions clear by posting the second best time of the day, albeit more than a second off Akid’s time. Team One for All’s Peerapong Luiboonpeng was third ahead of the ever-present Ahmad Fazli Sham on the ONEXOX TKKR SAG Yamaha.

Gupita Kresna was the last rider to make the cut for tomorrow morning’s Superpole, which will determine the top 15 grid positions.