Apiwat Wongthananon and Yuki Ito were the boldest riders at the start, getting away as most of the others took their time to acclimatise to the first precipitation of the 2019 season. Azlan, Thitipong and Parkes were notably judicious in the opening laps. Zaqwan moved towards the front steadily as the ONEXOX TKKR SAG BMW of Farid Badrul Hisham shot past everyone  and took a lead of around four seconds before the wet track overwhelmed his ambition and dumped him at the side of the track. Ahmad Yudhistira looked as though he had got the measure of the Victor Racing Yamaha before he too joined the DNF roster.

Race 1 winner, Azlan Shah Kamaruzaman, looked unhappy from the start and retired to the pits at half distance. By then, Zaqwan was within striking distance of Ito and Apiwat had faded to fifth, having been passed by Kawasaki Thailand’s Chaiwichit Nisakul and Thitipong. A cautious Broc Parkes was circulating in sixth.

Zaqwan pulled closer to Ito on Lap 9, passed him cleanly at the end of the tenth lap and made his way towards the horizon. Thitipong passed his team-mate and Ito and Chaiwichit threw away what had been a commendable day’s work moments later by crashing out. Zaqwan cruised to the win by 3.6 seconds, Thitipong took another second place and the championship lead and Ito held on for third. 20 seconds further back, Apiwat held off Parkes to finish fourth, while half a lap further behind, Timothy Joseph Cua Alberto, Ratthapong Wilairot and Rajini Krishnan were the only other finishers. 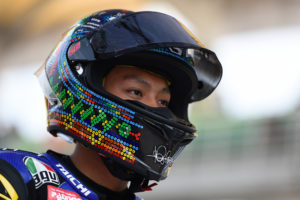 Yamaha Thailand’s Peerapong Boonlert crowned a week during which he had set the pace for ARRC’s new-look Supersport class during pre-season testing and practice by winning Race 2 with a margin of two seconds. There was plenty to take in behind him, with heated battles for the remaining podium places.

Adam Norrodin got away well from pole position to lead into turn one from Kasma Daniel and Peerapong, but ran off and dropped to last place. Hong Leong Yamaha’s Kasma Daniel tried to follow, but was distracted by pressure from Astra Honda’s Andi Farid Izdihar and Helmi Azman. Meanwhile Adam commenced his charge back through the field.

By lap eight of ten, Kasma was just ahead of Helmi and Andi, who was coming within range of the recovering Adam. Kasma ran wide at the exit to turn 14, to let all three of them through and Adam went past Helmi into third at the end of lap nine. Andi held on in second, while Kasma came back to drop Helmi to fifth and then got past Adam at the final corner to finish third. Helmi claimed his second fifth place of the weekend, four seconds clear of Ramdan Rosli and Azroy Hakeem Anuar. 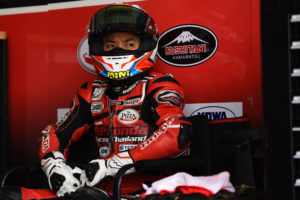 AP Honda’s Muklada Sarapuech bounced back from the disappointment of her DNF in Race 1 to overcome a determined Andy Fadly and win Race 2.

Starting from pole position, Muklada slotted in behind Astra Honda’s Lucky Hendriansia and the Manual Tech KYT Kawasaki of Fadly. Just behind them, Astra’s Irfan Ardiansyah crashed at turn one in a four-bike pile-up, while Awhin Sanjaya attempted to hang on to the front three, before falling back.

Fadly began to lose contact with the two Hondas on lap four, but on lap five Lucky ran wide at turn one. He recovered to stay in front of Fadly, who used his fellow Indonesian to tow him back up to within reach of Muklada. Lucky got in front of the Thai rider on lap six, while Fadly vainly tried some wide, sweeping lines to keep himself in contention for the win. With two laps remaining Lucky got turn 15 wrong to let Muklada and Fadly through and the Thai set her sights on the clear track in front of her. Fadly fought back and outbreaked Muklada into the last turn, as Lucky crashed out. Despite getting out of the corner behind the Indonesian, Muklada got the best drive and took the win by a wheel. Awhin claimed third by a whisker from Aiki Iyoshi and Faerozi. Muzzakir was sixth from Izzat Bahauddin. Izam Ihmal was eighth, Angi Setiawan ninth and Cao Vietnam was tenth in front of a remounted Lucky.

It was all smiles in the UMA Yamaha Racing Philippines garage, as they celebrated their second win of the weekend, after Fernando Masata took his turn on the top step of the UB 150 podium after another incident-packed six lap contest.

Aldi Satya Mahendra got the best start to lead for most of lap 1, threatened mostly by Wawan Wello, until he ran wide and dropped back, albeit briefly. Mckinley Kyle Paz, Masato, Akid Aziz, Peerapong Luisboonpeng, Amirul Ariff Musa and a bunch of the usual suspects bumped and weaved their way close behind. Fazli Sham’s unhappy race weekend continued when he pulled into the pits at the end of lap two.

An attempt by the UMA Philippines duo to break away on lap 3 was foiled by the chasing peloton and, at the end of lap four, there were eight bikes in the leading group. Wawan had another moment when he almost highsided, but he scrambled straight back into contention. A last corner tangle at the end of lap five took out Aldi, leaving the two filipinos, Akid, Peerapong, Haziq Fairues, and Wawan to the final lap fight.

As the went into the final turn, Akid went down and it was Masato who came through to take the win from Ariff Musa, Kyle Paz, Wawan, Peerapong and Haziq.