Edgar Pons ends his 2018 the best way possible, winning in Valencia after getting the pole position. 2nd place for Hector Garzó, Jesko Raffin is 3rd.

Edgar Pons got his 4th success in the CEV Moto2 season, closing this 2018 with the best possible result after getting the pole position too. Hector Garzó finished 2nd, while the European champion Jesko Raffin closed the race 3rd thanks to the penalties given to Tommaso Marcon and Marc Alcoba (who were fighting a bit too hard for the podium).

Amazing kick off for Pons ahead of Garzó and Alcoba, but we can’t say the same of Marcon, 2nd on the starting grid but losing some positions soon after the start. The first three riders seemed ready to leave everyone else behind, while Zaccone, his fellow countryman of the Speed Up team (who managed to climb some positions up), and Raffin  (racing with a Suter for the Stylobike team instead of the KALEX belonging to the Swiss Innovative Investors team, as the latter is suffering a bad economic crisis) engaged in a fierce battle for the 4th place. As laps went by, the fight for the victory became a two-riders fight while Alcoba was reached by the Italian riders and by the champion, Raffin, who all started a long-lasting battle for the 3rd step on the podium. The most intense duel was that between Marcon (despite risking a crash a couple of times) and the Spanish rider.

The top position didn’t come as a surprise: the 2018 CEV Moto2 ended with a new success for Edgar Pons, followed by Hector Garzó. Tommaso Marcon crossed the finish line 3rd, resisting all Marc Alcoba’s assaults (they both fought really hard during the last lap, almost getting physical), but the 3rd official position went to Jesko Raffin, who stepped on the podium while the two previous riders were both disqualified for their harsh final duel. 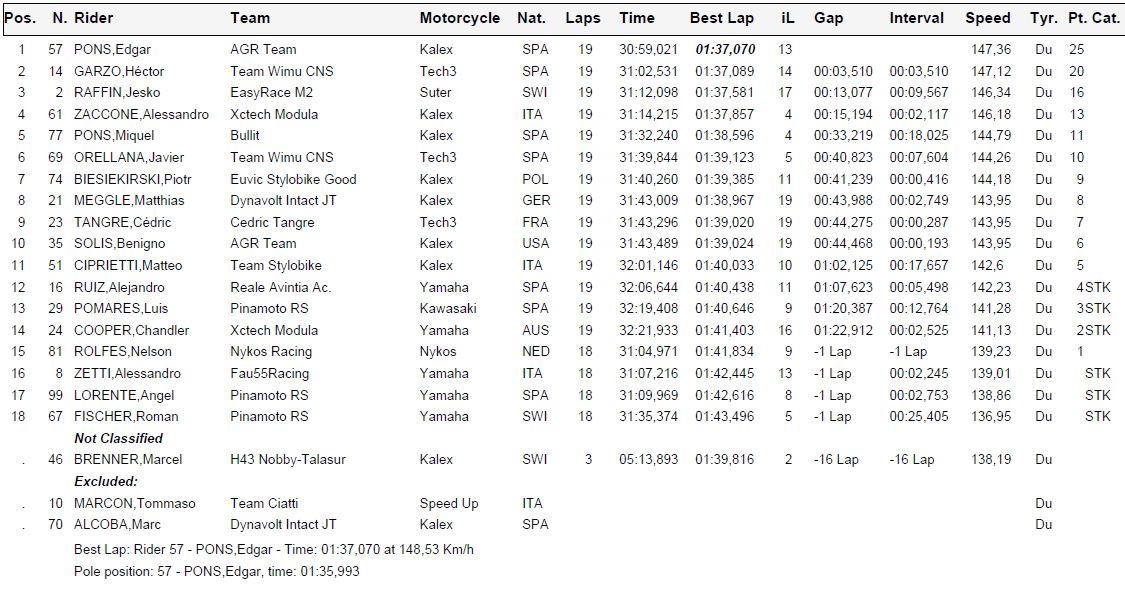