A successful day for Ai Ogura, who wins Race 1 ahead of Jeremy Alcoba and the Junior World Champion Raúl Fernández.

Ai Ogura wins at the photo finish, crossing the finish line 1st ahead of Jeremy Alcoba and Raúl Fernández, who can now officially celebrate the title of World Champion in the “Junior Championship” thanks to his 3rd place during the first race of the last round in the CEV Moto3 (and the absence of main rival Manuel Pagliani). The final race will start at 2 PM.

An amazing kick off for the poleman Kunii and for Ogura, but a group of riders made up of Fernández, Alcoba, Montella, Yurchenko and Viu immediately took the lead and ran away keeping the top positions for most of the race. Pizzoli’s race ended very early as he didn’t start well and fell after just a few laps. The same happened to Mahadi and Paasch, while Booth-Amos had to go back to his pit lane for some technical issues of his Honda. 10 laps before the end Montella, the only Italian rider in the leading group, fell too.

The battle for the podium fired up during the last few laps, but it didn’t take a good turn for Yurchenko, who crashed due to a high side on Turn 11. Kunii suffered the same destiny, taking the lead at the beginning of the race but slipping toward the end. A great victory in this Race 1 for Ai Ogura, who eventually managed to win over Jeremy Alcoba and the new CEV Moto3 Champion Raúl Fernández. Aleix Viu closed his race down the podium.

Behind the top riders, there was a large group fighting for the 5th place until the chequered flag. Sergio García will eventually cross the finish line first of the aforementioned group, closely followed by Can Öncü, Celestino Vietti, Filip Salac, Ryusei Yamanaka, Maximilian Kofler, Gerard Riu, Apiwath Wongthananon and Riccardo Rossi. 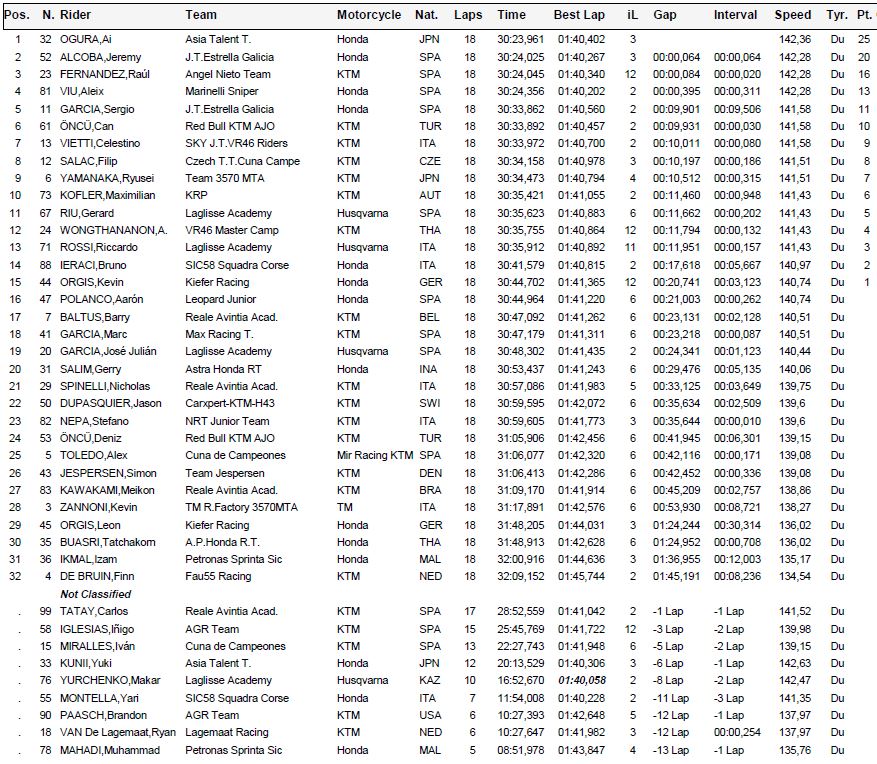