The new vice-champion Sergio García wins the last 2018 race ahead of Ai Ogura and Can Öncü.

Sergio García managed to gain his 4th victory of the season, and the title of vice-champion during the last race in the Moto3 CEV. The second race of the day was suspended 3 laps before the end due to a crash. The winner of Race 1, Ai Ogura, got the 2nd place while the 3rd went to Can Öncü (just one week after he got the World Championship win as a wild card, on the same track).

Race 2 started with two Japanese riders taking the lead, but Ogura performed the best kickoff and took the top position ahead of poleman Kunii. Fernández, Alcoba, Montella and García (Pizzoli didn’t show up on the starting grid) took up the positions behind them in this order.

This race has been hard-fought since its very beginning, with a large number of riders fiercely battling and sparing no energy.  Booth-Amos’ year ended the worst way possible, as he got a double 0 today due to technical issues during Race 1 and a fall in Race 2. Montella crashed for the second time today, despite being in the leading group until 7 laps before the end.  Just before him, Paasch had to end his race early as he suffered some injuries when he fell in Race 1 (he fell more than once, luckily without further consequences).

Only 3 laps before the end of the race, a violent crash on Turn 4 required a red flag. But more than 2/3 of the race had already been completed so the competition was officially over. The victory is assigned to Sergio García, who stepped on the highest podium’s step for the 4th time this season. Ai Ogura got the 2nd place while Can Öncü conquered another podium thanks to his 3rd place ahead of the current champion Raúl Fernández. 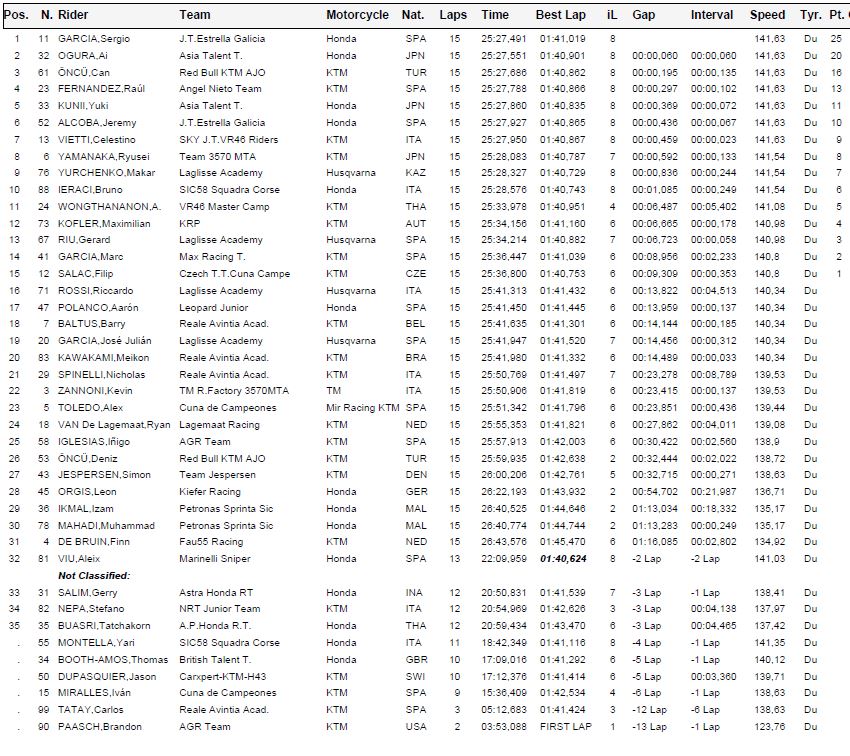