Francesco Bagnaia takes his leadership back after winning a great battle against Miguel Oliveira, while Luca Marini got the 3rd step on the podium.

We witnessed an amazing duel between two very competitive riders today: Miguel Oliveira and Francesco Bagnaia fought for the 2018 World Championship 1st place. The Italian rider eventually managed to win at the last turn (with an extremely difficult overtake) over the Red Bull KTM Ajo Team forerunner. This way, he also won the head of the World Championship ranking back. Luca Marini got his third podium in a row, while Alex Marquez fell again and can now count only on math to stay in the run for the World Championship, as his rivals have an extremely large advantage over him in the raking.

Bagnaia performed a very quick kick off, but Oliveira took the lead at the first turn. The Italian rider and Quartararo hit each other: after that, the first rider ended up 3rd behind Navarro while the second went out of track and lost many positions. Soon after, Baldassarri also fell, slipping after a short contact with Lecuona and making his teammates Fernández and Corsi fall too as they didn’t manage to avoid his bike. Oliveira tried to run away and managed to accumulate and maintain a large lead during the first laps, but Bagnaia didn’t let him go and performed a great comeback. Marquez e Pasini, together with Marini, started to battle for the last step on the podium.

The race ended with a spectacular duel between the two main contestants for the World Champion’s title: Miguel Oliveira and Francesco Bagnaia spared nothing and gave us an unforgettable and hard-fought battle for the victory at the Red Bull Ring, with many overtakes on both sides. At the very last turn, the Italian rider managed to win over the Portuguese, winning not only the race but also the 1st position in the World Championship ranking. Alex Marquez got another 0, falling down right before the end of the race. Luca Marini should thank him for it, as he easily got the 3rd place ahead of Mattia Pasini. Jorge Navarro got the 5th place ahead of Brad Binder and Marcel Schrötter. Joan Mir crossed the finish line 8th, followed by Fabio Quartararo and Iker Lecuona. 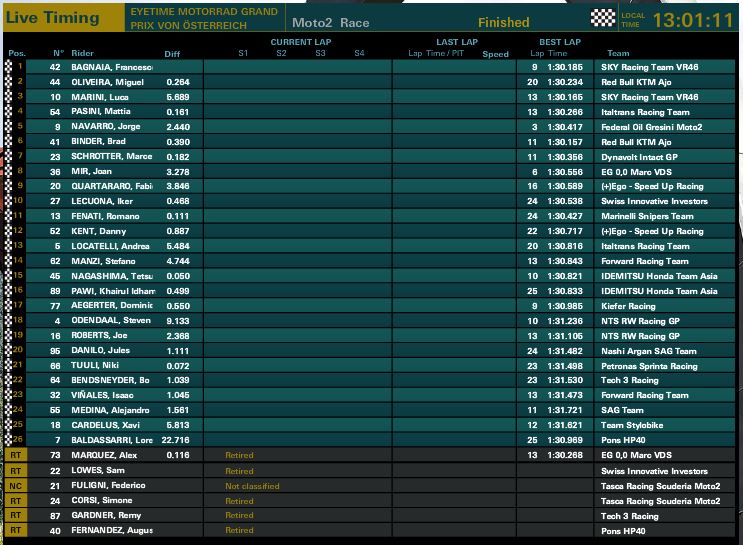