Marc Marquez is again the best rider thanks to his great lap time during the FP2. Ducati riders Jorge Lorenzo and Andrea Dovizioso arrived just behind, with Yamaha remaining at the end of the top 10.

This Friday at MotorLand Aragón belongs to Ducati and to Marc Marquez, as they have been the undiscussed leading characters: in the morning, the Reds took the lead, while in the second round of FP the current World Champion decided to raise his voice and registered the best time of the day ahead of Jorge Lorenzo and Andrea Dovizioso. A great time for Andrea Iannone too, 5th ahead of Danilo Petrucci; while Yamaha riders Valentino Rossi and Maverick Viñalesi took up the last two positions in the top 10.

The first striking difference compared to the morning is the outside temperature, many degrees higher than during FP1. Most riders, with few exceptions, decided to race the first part of the round with hard rear tyres. The battle for the best time immediately fired up, with many riders improving their morning times in just a few minutes. Rins and Viñales made some curious choices, as they both started with soft rear tyres: the first rider managed to get into the temporary top 10 anyway, but the second one remained far behind and changed his mind (and tyres) soon after.

Iannone kept the head of the ranking for quite a long time, but he eventually needed a change of tires that cost him his position as we witnessed a new assault to get the best positions in the ranking. The situation considerably changed: the Ducati-Honda duel ended with Marc Marquez on top, ahead of Jorge Lorenzo and Andrea Dovizioso. Cal Crutchlow got the 4th place, followed by Andrea Iannone and Danilo Petrucci, with Dani Pedrosa 7th ahead of Alvaro Bautista, Valentino Rossi and Maverick Viñales. Rookie Franco Morbidelli missed the top 10 for just a tenth. 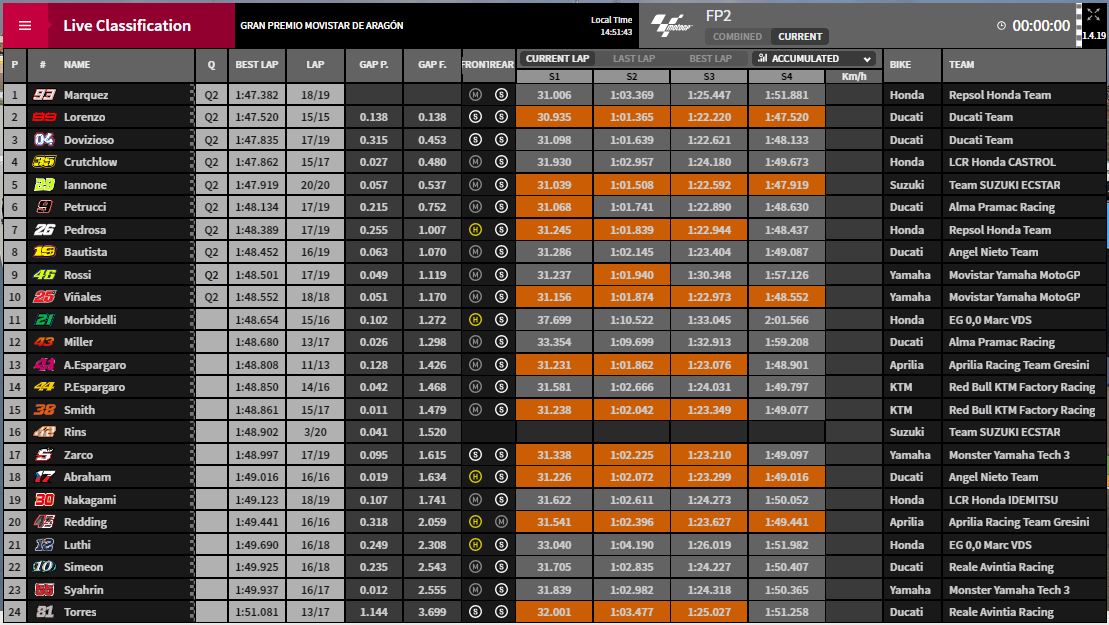