Great joy for Ducati in Brno, as Andrea Dovizioso gets the win followed by Jorge Lorenzo, while Marc Marquez fills the last step on the podium.

Andrea Dovizioso kicked off from the pole position and managed to conquer an incredible victory at Brno Automotodrom. He piled up the advantage in the last few laps and crossed the finish line 1st ahead of his teammate. Jorge Lorenzo fought all the way until the chequered flag against Marc Marquez, still the World Champion, and he eventually managed to get a double victory for the Red.

Rossi performed a great start and immediately took the lead, closely followed by Dovizioso who soon after got the head of the group. Marc Marquez remained 3rd ahead of Lorenzo. Smith, Viñales, and the wild card Bradl’s race ended early as they all slipped on Turn 3 gravel: the German rider had to be taken to the Medical Center for checkups and the incident is now under investigation of the Race Direction. During the initial laps, 11 riders created a compact group that kept a relatively slow pace in order to preserve the tires as long as possible on Brno’s abrasive asphalt.

Redding also fell down and Rabat had to pull back from the race due to his Desmosedici’s technical issues.  In the meanwhile, 6 riders were running way: Dovizioso, Marquez, Crutchlow, Lorenzo, Rossi, and Petrucci imposed their pace in Brno. Just a few laps before the end of the race, the battle fired up: Dovizioso, Lorenzo, and Marquez started an astonishing fight for the best podium step.

The Brno World Championship gave us an outstanding double victory for Ducati. Andrea Dovizioso got the 1st place, followed by his teammate Jorge Lorenzo who managed to defend his position from Marc Marquez’s final assault. Valentine Rossi got the 4th place, overtaking Cal Crutchlow at the very end, while Danilo Petrucci finished 6th with a large margin over Johann Zarco. Dani Pedrosa closed the race 8th ahead of Alvaro Bautista and Andrea Iannone. 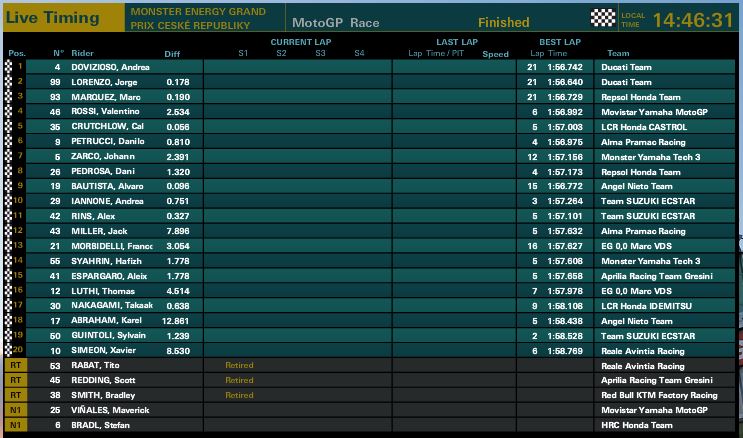