Andrea Dovizioso won by a large margin over Marc Marquez at Misano World Circuit, Crutchlow is 3rd. Lorenzo fell right before the end and Ducati has to say farewell to the hoped-for double victory.

Ducati can definitely celebrate today at Misano World Circuit, as they got their second victory on an Italian track: Andrea Dovizioso set an unmatchable pace and managed to cross the finish line 1st, obtaining a very important win. Marc Marquez and Cal Crtuchlow gained the other two steps on the podium. The unlucky Jorge Lorenzo fell at the second-to-last lap while fighting for the 2nd place and ended up 17th in the ranking.

Again, the first technical issues appeared right before the warm-up round: Danilo Petrucci got stuck in his position on the starting grid, but he managed to re-start the bike without losing positions. Lorenzo gave us an amazing kickoff, but soon after both Dovizioso and Miller caught up with him and create a Ducati-led group closely followed by Marquez. The current World Champion worked hard to keep up with the two leading reds, while the Australian rider crashed at the Carro turn, as did Simeon soon after at the Rio turn.

In the meanwhile, the expectations were met: Dovizioso, Lorenzo, and Marquez conquered a large advantage over their rivals, becoming the three favorites fighting for today’s GP victory. Petrucci cut through Turn 1 and 2, getting a penalty of a little more than 1 second that was added to his final overall time. The wildcard Bradl had to leave the race early after slipping 10 rounds before the end. The same happened to Pol Espargaró: he had to go back to his pit lane and eventually withdraw from the race due to his precarious physical conditions.

Just 6 laps before the chequered flag, both Lorenzo and Marquez started a great comeback and everybody was waiting for an exciting final battle, but the Majorcan rider slipped just 2 laps before the end and lost the 2nd place irremediably. At that point, Andrea Dovizioso was already out of reach and conquered a glorious victory in Misano. Marc Marquez finished 2nd ahead of Cal Crutchlow. The three leading riders left a large margin over their closest pursuers, Alex Rins, Maverick Viñales, and Dani Pedrosa. Valentino Rossi crossed the finish line 7th ahead of Andrea Iannone and Alvaro Bautista, with Johann Zarco taking up the last position in the top 10. 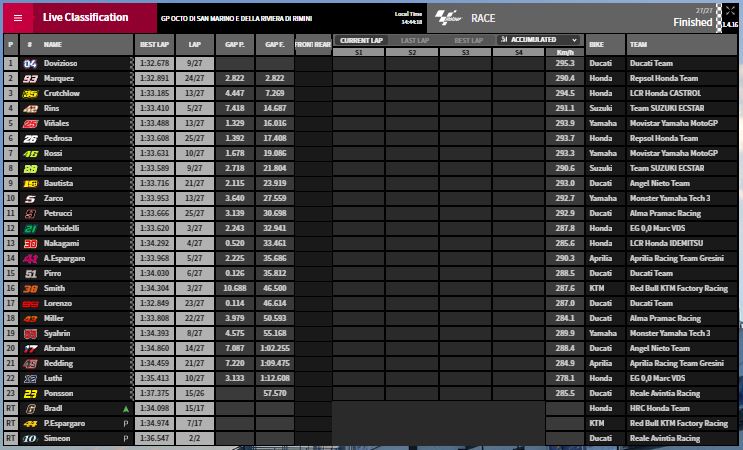