In Japan, Marc Marquez wins the 7th official title as a World Champion, the 5th in MotoGP, thanks to his victory in today’s race. On the podium next to him stepped Cal Crutchlow and Alex Rins.

In Motegi, Marc Marquez won the title of World Champion for the 7th time in his career, the 5th in MotoGP. He is now ranked 6th in the list of the most successful riders of all times, ex-aequo with Phil Read and John Surtess, and just behind important names such as Giacomo Agostini (15), Angel Nieto (13), Valentino Rossi (9), Mike Hailwood (9) and Carlo Ubbiati (9). At 25, the young new champion continues to write pieces of the MotoGP history. The 2018 season ends this way, thanks to Andrea Dovizioso’s fall in the last few laps, the only rider that actually tried to overtake Marquez for most of the race. Cal Crutchlow and Alex Rins stepped on the podium too. 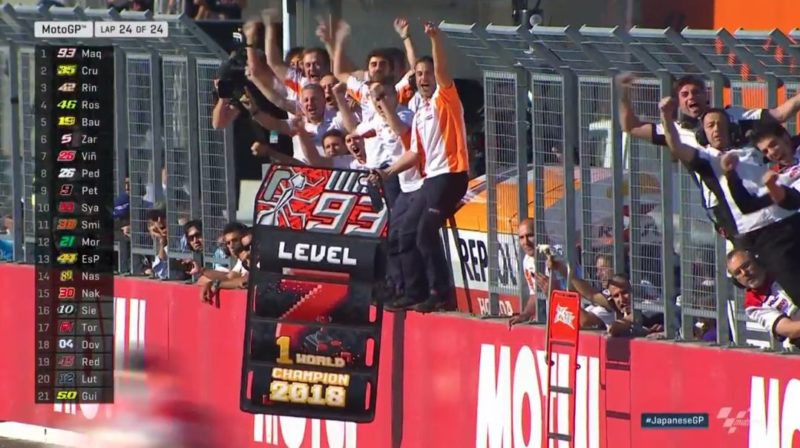 Dovizioso kicked off very well, while Miller and Zarco almost hit each other. Marquez immediately tried to get the top. After just a few rounds, the poleman, the current World Champion and Crutchlow set the pace e tried to leave a large margin from their rivals. Aleix Espargaró had to withdraw for technical issues on his RS-GP. Jack Miller’s race ended earlier too, despite starting from the front row, due to a fall; the same happened to Karel Abraham, but due to a different crash.

Around 10 laps before the end, we had some give and take between Marquez and Dovizioso, closely followed by Crutchlow and the two Suzuki, both trying to climb up some positions, at least until Iannone crashed. The first two riders managed to gain a larger advantage, and then they started the real duel for the victory. Just 4 laps before the end, we got the most important overtake and 2 laps after the competition in over as Dovizioso tried to regain his leading position but slipped on the gravel.

Marc Marquez has no more rivals and he is the 2018 MotoGP World Champion! Cal Crutchlow and Alex Rins crossed the finish line behind him, 2nd the English rider and 3rd the Spanish one. Valentino Rossi ended 4th, followed by Alvaro Bautista and Johann Zarco. Maverick Viñales closed the race 7th, ahead of Dani Pedrosa, Danilo Petrucci and today’s top rookie Hafizh Syahrin. 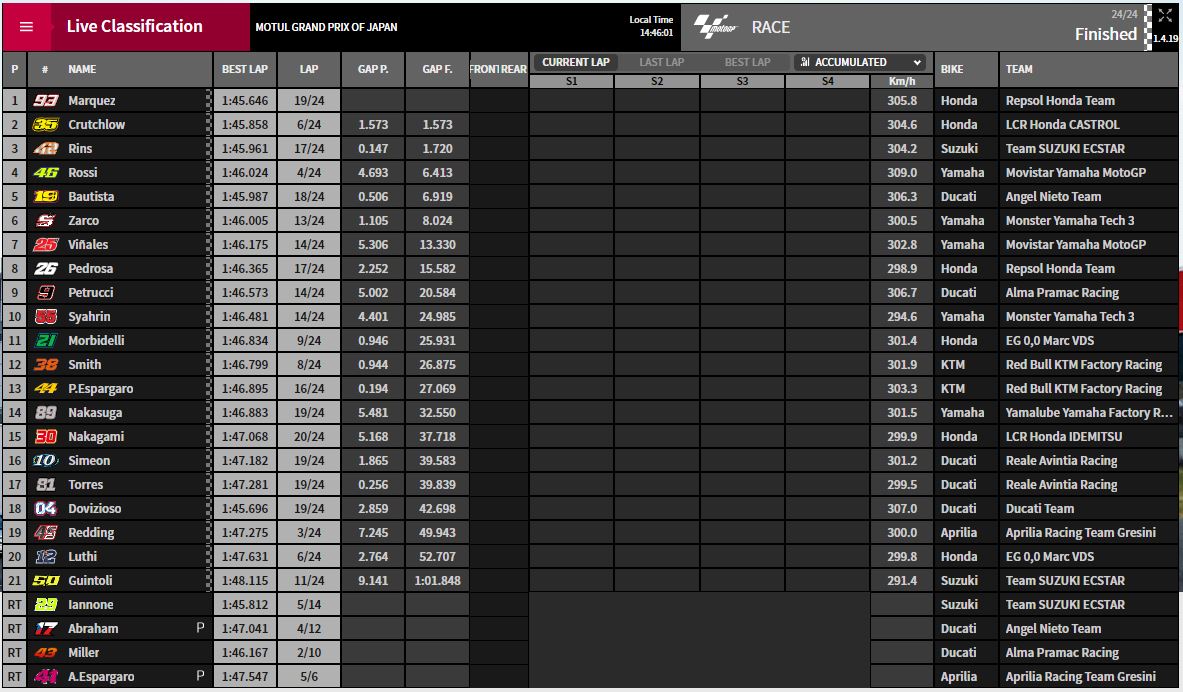 MotoGP, Marc Márquez, official absence from the GPs in Qatar