Marc Marquez wins another pole position at Phillip Island and he will kick off 1st tomorrow ahead of Yamaha riders Maverick Viñales and Johann Zarco.

79th pole positions in his career, 51st in MotoGP and the 5th in 5 seasons at this circuit: Marc Marquez keeps on collecting poles and he will start from the 1st position on the starting grid tomorrow, ahead of Yamaha riders Maverick Viñales and Johann Zarco. Valentino Rossi got the 7th place while Andrea Dovizioso the 9th.

Q2 start in slightly wet conditions due to some raindrops that fell on some spots of the track. Despite the weather conditions, all riders decided to take the track with slick tyres. The battle for the pole immediately fired up and the riders fought hard registering quicker and quicker times. Bautista fell and had to leave qualifying early. Nobody could take Marc Marquez down his throne, as he took the lead in the first few minutes and eventually won a new pole position. The front row will be completed by Maverick Viñales and Johann Zarco, followed by Suzuki riders Andrea Iannone and Alex Rins. Jack Miller got the last position on the second row, just before Valentino Rossi. Danilo Petrucci will start from the 8th place ahead of Andrea Dovizioso and Hafizh Syahrin (for the first time, he had direct access to Q2). Pol Espargaró and Alvaro Bautista took up the last positions in the ranking.

In the beginning of the Q1, Alvaro Bautista and Karel Abraham managed to win the two positions useful to access Q2, just ahead of the rookie Franco Morbidelli and of Dani Pedrosa. But after a short break at the pit lane, we witnessed an excellent final assault that gave us Q1 final results. The name of Alvaro Bautista stayed, but the second one changed, as Pol Espargaró managed to overtake the Czech rider and took his KTM to the next round. “Morbido” will kick off from the 15th place on the starting grid, while Pedrosa from the 18th ahead of Aprilia rider Aleix Espargaró. 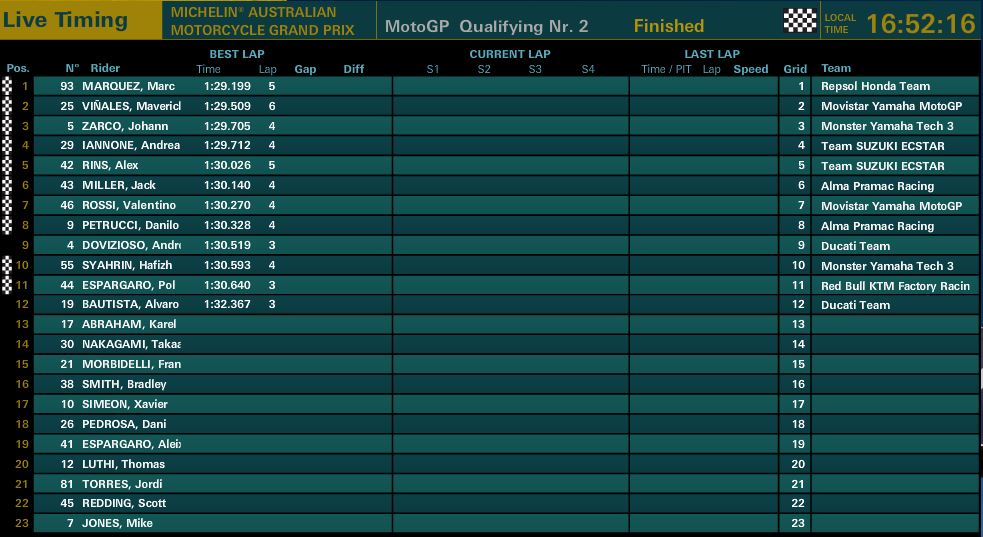