Marc Marquez gained another victory in Malaysia, his 9th in 2018. Alex Rins closed the race 2nd ahead of Johann Zarco. Rossi couldn’t reach the podium as he slipped during one of the last laps.

Marc Marquez’s hunger for victory doesn’t seem to be satisfied yet, as he keeps on winning every race despite having already gained the World Champion title for the 7th time in his career. Today in Malaysia he won his 9th race of the season, the 70th in the World Championship. This has been a victory he had to work for, as he performed a great comeback after getting a penalty that took him down to the 7th place. Valentino Rossi helped him, falling a few laps before the end when he was leading the race from the very beginning (but the current World Champion was already getting him). After this race, Honda gets the triple crown as they win the Constructors and Team championships too. Suzuki can be satisfied too, closing 2nd thanks to Alex Rins, while Johann Zarco got the 3rd step on the podium. His teammate Hafizh Syahrin can celebrate too, as he got a nice 10th place in front of his passionate local fans. 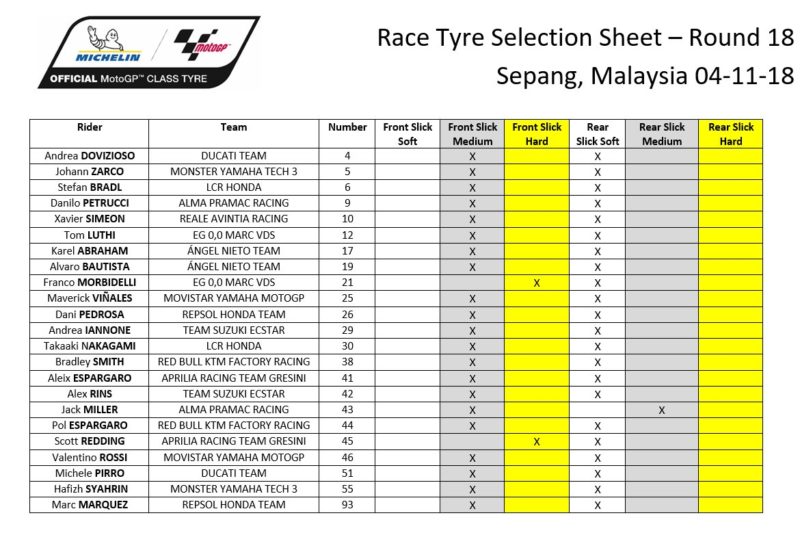 The best kickoff today was definitely that of Rossi, closely followed by Zarco, Miller (the only rider with two medium tyres) and Iannone. Marquez came right after them, ahead of Dovizioso and his teammate Pedrosa. The current World Champion risked crashing, but the one actually falling was the Italian Suzuki rider. The local rider Syahrin performed an outstanding comeback, starting last but managing to climb up to the 11th place. Abraham had some technical issues on his Desmosedici: he had to pull over first, and then to withdraw from the race. Pirro, who had been riding the injured Lorenzo’s bike since Saturday, fell down too. From the very beginning of the race, all the Ducatis seemed to be having a hard time; while Rossi was giving the top pace followed by Marquez and Zarco. But an unexpected turn of events happened 4 laps before the end: the Doctor, who had been leading this race from the start, slipped on Turn 1. He managed to re-enter the competition, but he ended up at the bottom of the ranking.

Marc Marquez could then continue his comeback more easily and he only needed to manage the advantage over his rivals that gave him another success. The battle for the other two podium’s positions continued until the chequered flag: Johann Zarco and Alex Rins fought particularly hard for the 2nd place, with the Spanish rider eventually getting the upper hand. Maverick Viñales closed the race 4th, followed by Dani Pedrosa and Ducati riders Andrea Dovizioso (now officially 2nd in the overall World Championship ranking), Alvaro Bautista, Jack Miller and Danilo Petrucci. The local rookie Hafizh Syahrin got an exciting 10th place in front of his fans. 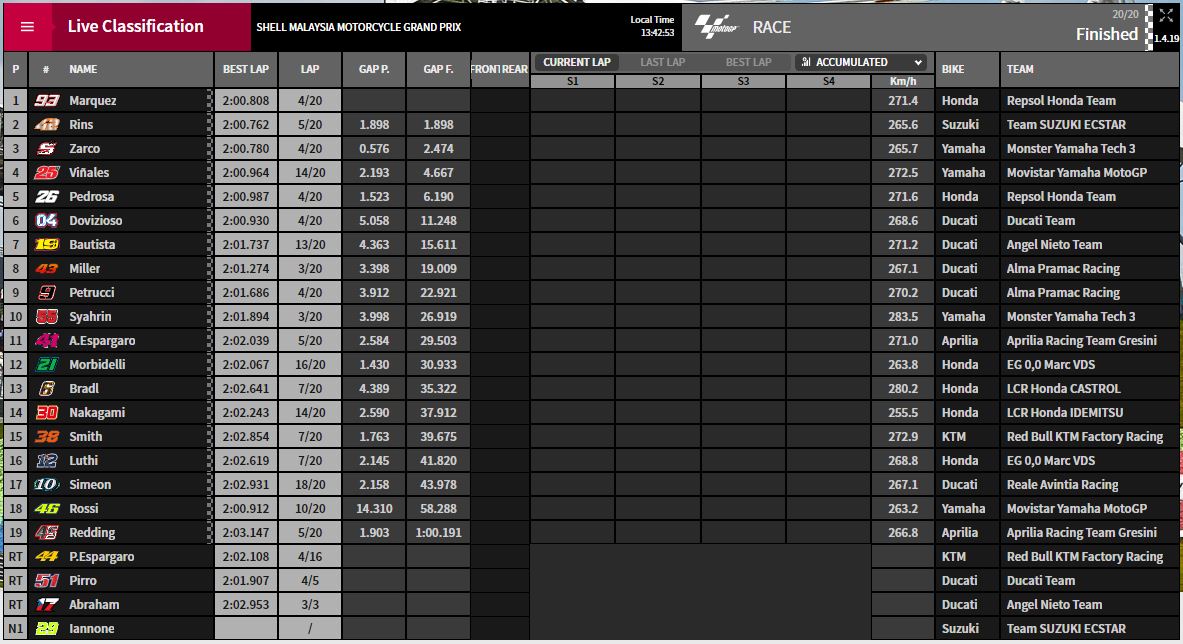