A difficult round of Qualifying today at Silverstone, due to the heavy rain. In this harsh conditions of wet/dry track, Jorge Lorenzo stood out and won his second pole position with Ducati, his second pole of the season too. Two red bikes will kick off from the front row tomorrow, as Andrea Dovizioso closed 2nd. The 3rd place went to Johann Zarco, the Tech 3 rider, the best Yamaha today as his brand-mates Maverick Viñales and Valentino Rossi ended up right outside the top 10. Cal Crtuchlow is 4th ahead of Marc Marquez.

This round of Qualifying gave us an incredible show, mainly due to the heavy rain: we had the first scary moment during FP4 when Rins slipped on a puddle on Turn 7 at 162 km/h. With his amazing alertness, the Spanish rider managed to jump off the bike before it hit the side barrier and prevented more serious injuries. Tito Rabat wasn’t lucky enough, soon after he also slipped and Morbidelli’s bike ran him over after the latter crashed on the same spot. The Spanish rider broke his femur, shinbone, and calf of his right leg and he was immediately carried to the hospital for further checkups.

Q1 started in this mood, and despite the wet track, we had an amazing battle for the first two positions. Eventually, Bradley Smith and Alex Rins got them, while Franco Morbidelli was the first rider out and Dani Pedrosa only got the 16th position on the starting grid. Right after the end of Q1 there was a very long break to check track’s conditions after another heavy shower. When the rain finally stopped, and the track’s situation improved, there was the last hard-fought battle for the pole position. Miller decided to take some risks using double soft slick tires (a difficult choice that didn’t pay off as the track was still too wet).

Eventually, Jorge Lorenzo won the pole position here at Silverstone and his teammate Andrea Dovizioso got the 2nd place right next to him. Johann Zarco will also start from the front row, managing to leave the local Cal Crutchlow behind right before the end of the round. Marc Marquez got the 5th place ahead of Danilo Petrucci. Andrea Iannone finished 7th, followed by Bradley Smith and Jack Miller, while Alex Rins, Maverick Viñales and Valentino Rossi filled up the remaining positions in the top 12. 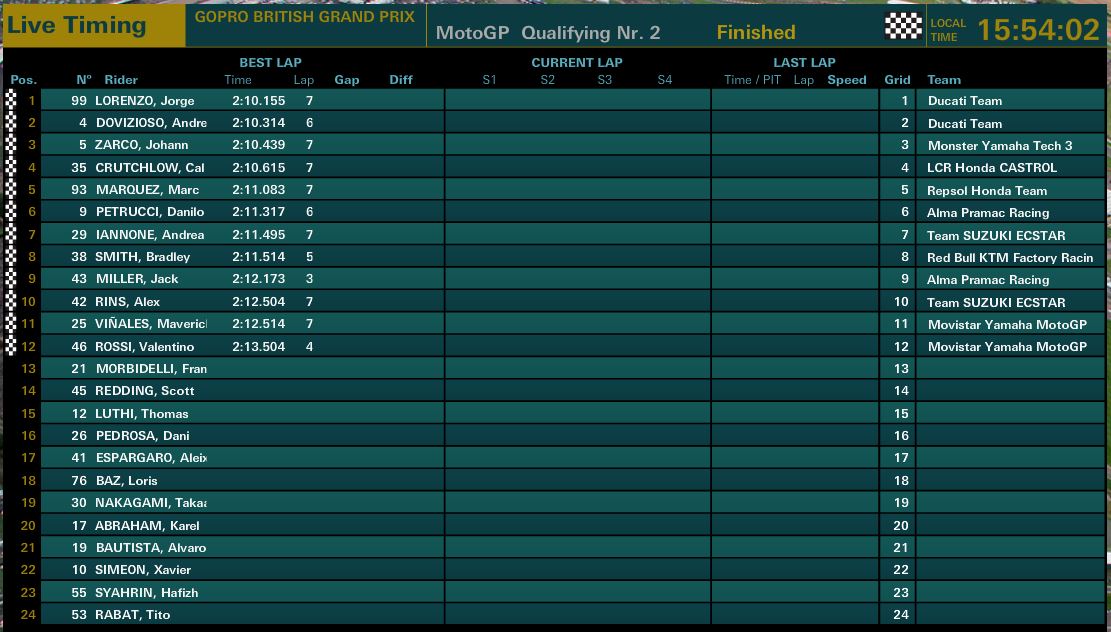 MotoGP: “Jorge Lorenzo has taught me to never give up”