Danilo Petrucci stands out on the wet track, registering the best time during FP2 ahead of Marc Marquez, Valentino Rossi and Andrea Iannone.

The heavy rain seems to be Danilo Petrucci‘s natural environment, as he is the only Ducati rider in the top 10. In this second round of FP he made the best time, an excellent 1:41.318, ahead of Marc Marquez (who remains the top rider this Friday with the best absolute time), Valentino Rossi and Andrea Iannone.

Riders started the round on an even heavier rain at the Ricardo Tormo Circuit, with Rins soon taking the lead ahead of Pol Espargaró and Viñales. But after only 10 minutes of the round here you are the red flag: they suspended FP2 not only because of track conditions but also because there were some residues on Turn 12 left by Zarco’s bike after he slipped. Once they cleaned up the track, the round can re-start and most riders went down the track again (Petrucci took the lead, followed by Marquez and Rossi), while just a few decided to wait a little bit longer and started racing only in the second half of the round. This was not a great day for the rookie Simeon, who slipped for the second time today. Bradl, substituting for the injured Crutchlow, fell down too.

Due to the Circuit’s bad conditions, times were considerably slower compared to FP1 (only Syahrin and Redding managed to improved their FP1 times). this second round ended with Danilo Petrucci on top of the ranking with the best FP2 time, followed by Marc Marquez; and with Valentino Rossi 3rd ahead of his fellow countryman Andrea Iannone. Aleix and Pol Espargaró got the 5th and 6th place respectively, while Maverick Viñales closed 7th ahead of Scott Redding. Bradley Smith and Alex Rins took up the remaining positions in the top 10. 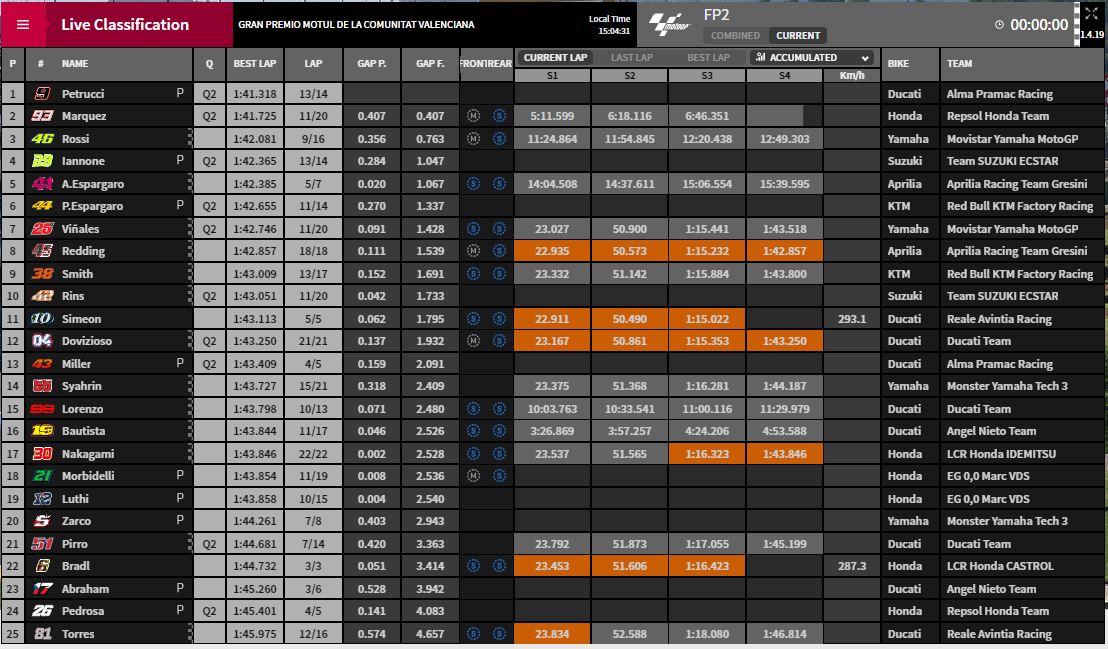 MotoGP, Marc Márquez, official absence from the GPs in Qatar

MotoGP, Marc Marquez returns: on Thursday he will be in Losail