Can Öncü won the pole position first, and then the race in Misano, this way conquering the Red Bull Rookies Cup title. Filip Salač and Adrián Carrasco stepped on the podium too.

Thanks to the pole position and the 5th victory of the season, he is the 2018 Red Bull Rookies Cup winner: Can Öncü’s weekend just ended the best way after an exhausting battle against a large number of rivals. He managed to take the triumphal lead right before the chequered flag. He shared the podium with Filip Salač and Adrián Carrasco. Local rider Pasquale Alfano was very unlucky as he had to leave the race early, after just a few laps, because of a fall.

Deniz Öncü kicked off amazingly while Carrasco, Yamanaka, and Artigas overtook the poleman Can. Cook crashed and had to re-enter the race from the bottom of the group. The only local rider on track, Alfano, unfortunately fell right after the beginning of the competition and had to withdraw, together with Kunii. But the list of crashes doesn’t end here, as a few laps after also Kelly and Garcia went down, and Hernandez and Salim followed the same destiny. In the meanwhile, 9 riders were running away and started a fierce fight for the podium, leaving the rest of the group far behind.

As usual, this Championship gave us a spectacular hard-fought battle. Eventually, Can Öncü stood out as the undiscussed leader of the race and got the 2018 Red Bull Rookies Cup title. This has been another great success for the young Turkish rider, who managed to win ahead of Filip Salač and Adrián Carrasco. Ryusei Yamanaka is just out of the podium, closely followed by Xavier Artigas and Carlos Tatay. Meikon Kawakami got the 7th place ahead of Deniz Öncü and Dan Jones, while Sasha De Vits filled the last position in the top 10. 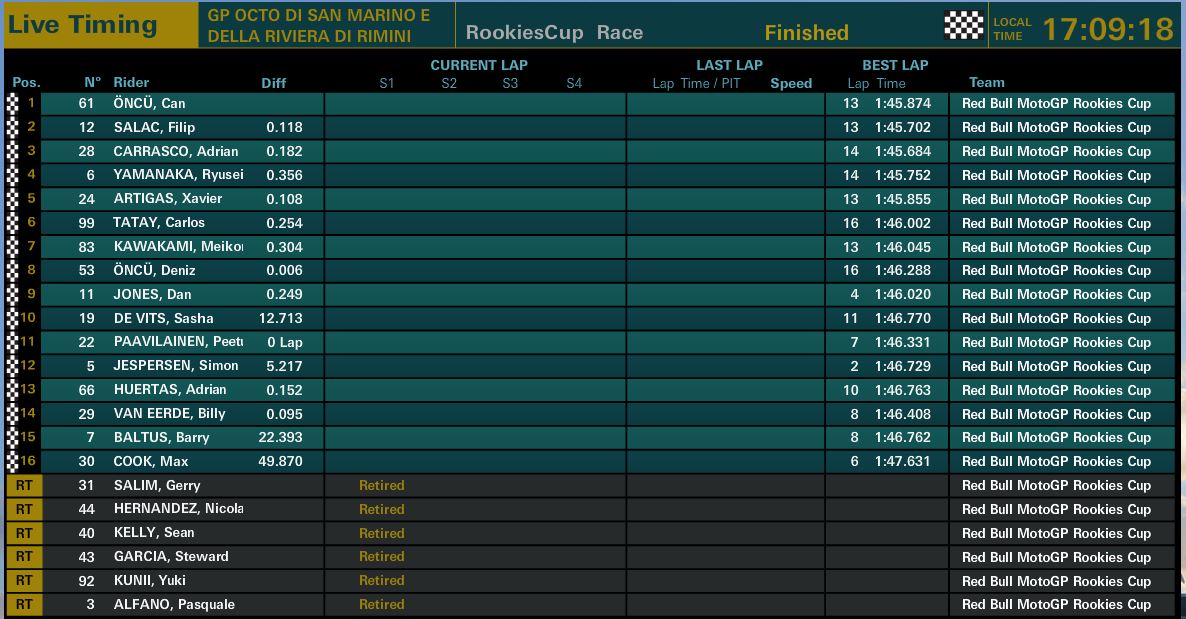