Brad Binder conquers the best position on the starting grid, as he eventually managed to overtake both Marcel Schrötter and Jorge Navarro at the very end.

The Moto2 Qualifying ended with an unexpected name at the top of the ranking: Brad Binder got the better of all the other riders just before the chequered flag. He climbed up from the 10th to the 1st position and conquered his first pole position. He is the first South-African rider to win this position in the intermediate class since the 80’s (when it went to Kork Ballington). Marcel Schrötter, who was leading the session, needs to “settle for” the 2nd place ahead of Jorge Navarro. Francesco Bagnaia got the 5th place while Miguel Oliveira will kick off from the 18th place on the starting grid. The race will start tomorrow at 12.20 AM.

As soon as Qualifying started, many riders began to fight for the best time. Marquez soon slipped on Turn 9, but he managed to restart and immediately took his bike back to the pit lane. On Turn 8 Manzi fell too, together with Fernández who slipped on Turn 15. Meanwhile, Schrötter kept the leading position for a long time, ahead of Navarro and ex-aequo with Marquez, until the final assault that changed the pole position.

The ranking didn’t undergo any dramatic change, apart from the incredible 1st place of Brad Binder, who managed to get the better of Marcel Schrötter for just 74 thousandths. This is his first pole position in Moto2. Jorge Navarro filled up the last place on the front row, ahead of Alex Marquez, Francesco Bagnaia and Mattia Pasini. Fabio Quartararo got the 7th place on the starting grid, followed by the Italian riders Lorenzo Baldassarri, Simone Corsi and Luca Marini. 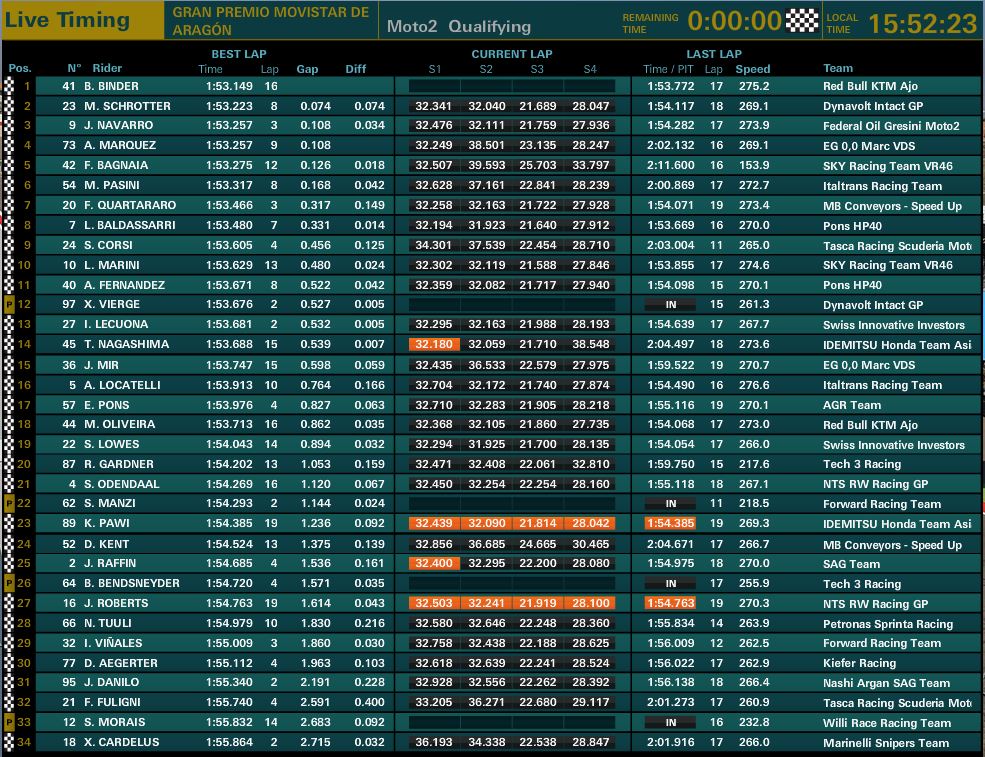