Xavi Vierge wins his first pole position at Termas de Rio Hondo. Lorenzo Baldassarri seemed to be leading the round firmly, but an excellent final lap allowed the Dynavolt Intact GP team’s rider to get the first slot in the starting grid. The Italian rider is second, while the third position has been taken by Danny Kent, who managed to send Mattia Pasini back to the fourth rank thanks to an extremely fast final lap. The race will kick off tomorrow at 6.20 PM, Italian time.

As it happened for the last free practice, riders started on a wet track. Baldassarri and Pasini took the lead right from the beginning, followed by Oliveira, while Marquez fell immediately on Turn 1. Because of the heavy rain, the ranking remained stable for most of the round. Just 15 minutes before the end we could see Fenati on track for his first timed laps.

The chequered flag was already waving when we saw the most important changes in the ranking. Xavi Vierge tricked Lorenzo Baldassarri on the last lap winning his first World Championship pole position, while the Italian rider finished 2nd. Mattia Pasini lost the front row because of Danny Kent’s excellent final lap. 5th position for Jorge Navarro, ahead of Sam Lowes and Miguel Oliveira, while Alex Marquez managed to finish 8th followed by Remy Gardner and Joe Roberts. 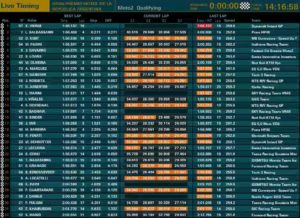