The World Championship leader Bagnaia stands out this Friday, taking the lead ahead of rookie Mir and Marini. Oliveira closes the top ten.

This first day at TT Circuit in Assen gets Francesco Bagnaia’s mark: after leading the first round of FP, the Sky Racing Team VR46 forerunner also conquers the best position in FP2, registering the best time of the day ahead of Joan Mir and his teammate Luca Marini. His main opponent for the World Championship title, Miguel Oliveira, got the last position in the top ten. Tetsuta Nagashima suffered a bad crash and he had to be taken to the Medical Center for checkups.

The second, and last, round for today starts with Mir, Quartararo, and Marini filling the first three positions, ahead of the World Championship leader Bagnaia and Marquez. But the Italian rider didn’t wait to take the head of the race, registering the best absolute time of the day. Manzi also had a curious accident at the beginning of the round: he went out of track and got stuck on the gravel. The race commissioners had to help him to get back on track, but he managed to fall again at the end of the round. Fuligni also slipped at the Haarbocht, while Nagashima suffered a more serious accident at the Ramshoek turn and he remained on the ground for a while before managing to stand up again, despite looking in a lot of pain.

The ranking remained almost the same for the rest of this FP2: Francesco Bagnaia finished the race 1st, followed by Joan Mir and his teammate Luca Marini. Fabio Quartararo got the 4th place, ahead of Lorenzo Baldassarri and Mattia Pasini. Alex Marquez made a 7th-place time, followed by Marcel Schrotter, while rookie Romano Fenati and Miguel Oliveira filled the last two positions in the top ten. 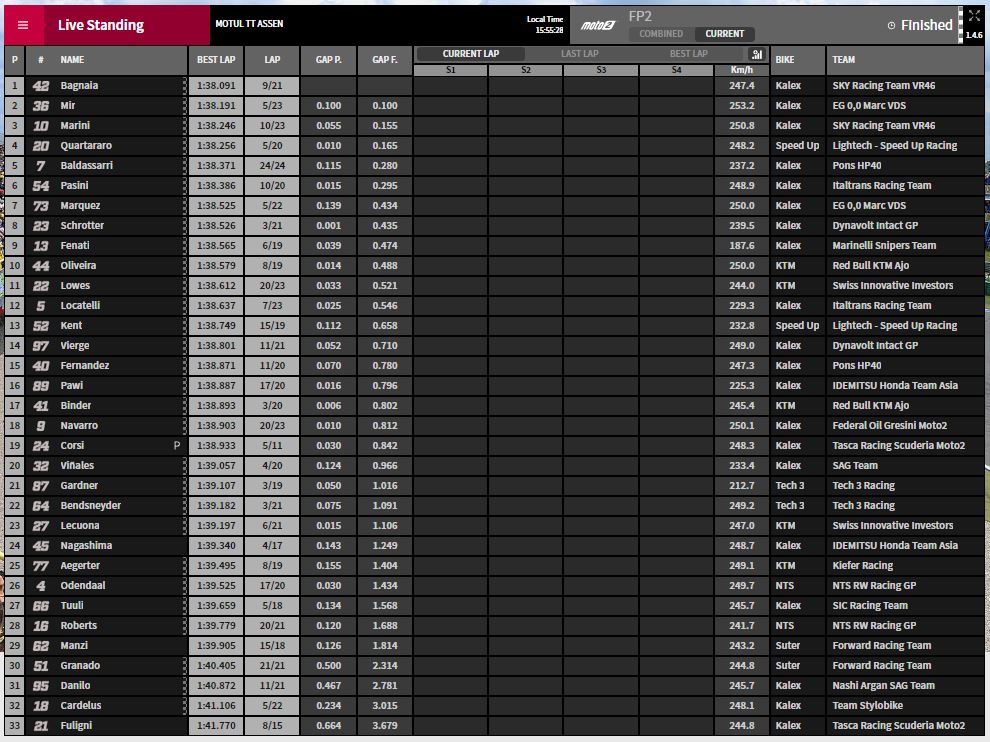