The Sky Racing VR46 rider Francesco Bagnaia ends this GP with a well-deserved victory, after leading every lap from the FP to the final chequered flag. Quartararo is 2nd and Marquez 3rd.

Francesco Bagnaia had the perfect weekend in Assen: he led during FP, got the pole position and finally the expected victory on the famous Dutch track. “Pecco” had no rivals and he set his pace right from the beginning, crossing the finish line first with a clear-cut advantage. Fabio Quartararo finished 2nd ahead of Alex Marquez. Lorenzo Baldassarri got in the podium area but experienced some issues with the tires, what a pity. Miguel Oliveira got the 6th place.

Bagnaia did a great kick-off, together with Schrötter and Marini, followed by Marquez and Mir. Kent fell almost immediately, slipping at the Ossebroeken Turn. Oliveira performed an excellent comeback, the same he did in the previous race: in just a few laps he managed to reach the top ten and worked hard to get to the leading group in the shortest time possible. Manzi fell on Mandeveen Turn, as did Vierge on Haarbocht Turn. Bagnaia tried a breakaway and managed to leave some margin from his opponents Marquez, Schrötter, Mir, and Baldassarri (who climbed all the way up from the 14th place on the starting grid). Then the first penalty: the Dutch rider Bendsneyder got a 1.4 seconds penalty for cutting the chicane. Quartararo performed a great comeback too: he managed to get to the 2nd place, where previously were Baldassaarri, before he had to re-enter the pit lane for a flat tyre, therefore compromising his race irreparably.

Francesco Bagnaia won the race with an unquestionable large margin over Fabio Quartararo, who got a step on the podium for the second time in a row, and Alex Marquez was 3rd. Marcel Schrötter arrived 4th ahead of Joan Mir and the Red Bull KTM Ajo duo, with Miguel Oliveira before Brad Binder. The remaining positions in the top ten went to Luca Marini, Sam Lowes and Andrea Locatelli. 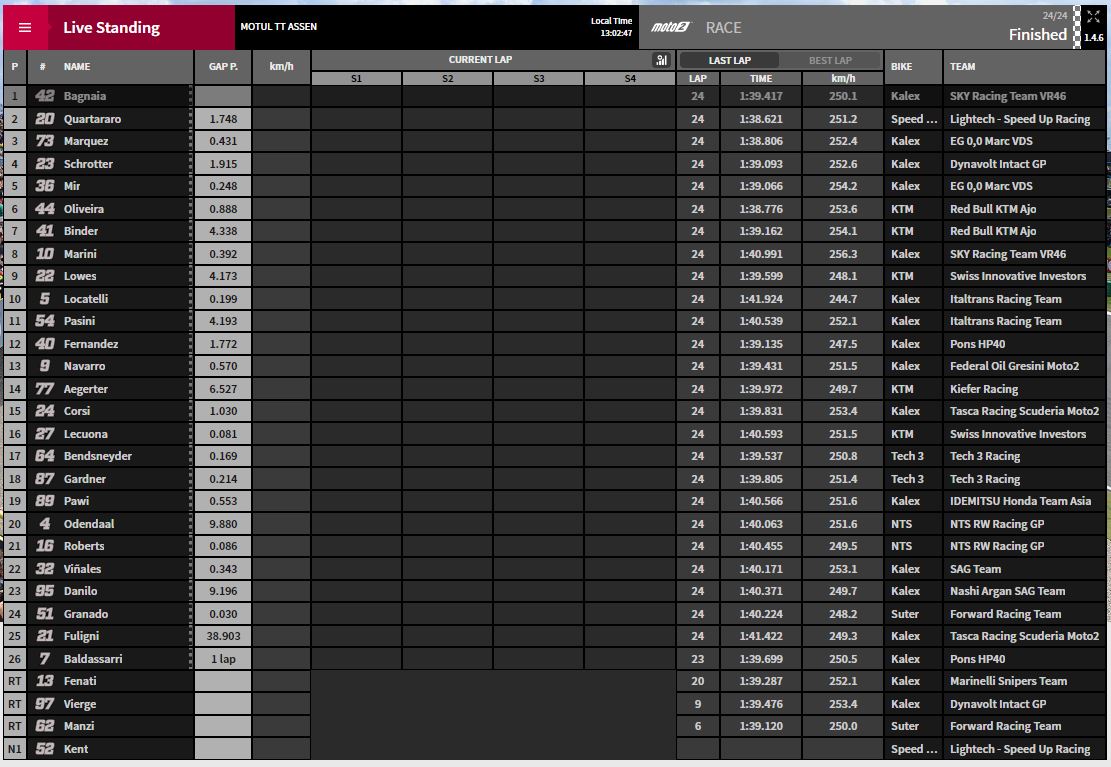