Luca Marini got the winning spark in this qualifying round and conquered his first pole position in Moto2. Marquez and Pasini will kick off next to him from the front row.

The pole position at the Automotodrom of Brno came out with a great initial assault: Luca Marini stood out in this Qualifying and took the lead for the first time in the World Championship. Alex Marquez and Mattia Pasini filled up the other two positions on the front row, while Miguel Oliveira finished 4th and Francesco Bagnaia 6th.

The KTMs began excellently, with Oliveira and Binder immediately conquering the head of the group. But many other riders threatened the Aki Ajo riders’ positions: we got a temporary top 6 in less than a tenth, with 20 riders crossing the line in less than a second. The situation stabilized with Marini on pole, Marquez one tenth after him and then Pasini. During the session we also see Granado, Pawi, and Baldassarri crash in three different accidents.

The ranking remained unchanged until the chequered flag: Luca Marini got the first pole position in his World Championship career, closing ahead of Alex Marquez and his fellow countryman Mattia Pasini. Miguel Oliveira will be opening the second row, followed by Marcel Schrötter and the current World Championship leader Francesco Bagnaia. Brad Binder finished 7th, ahead of Xavi Vierge, Dominique Aegerter, and Lorenzo Baldassarri. 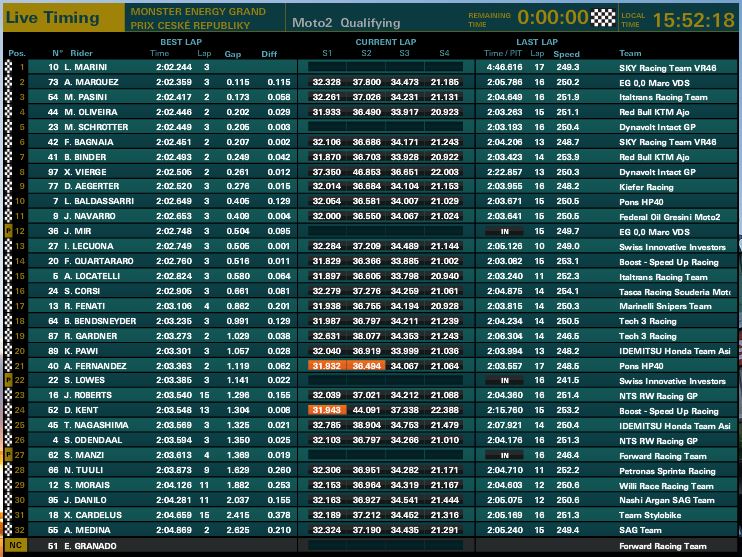