Most Important, MotoGP, Other categories
June 15, 2018 by Bikeandrace
0

Alex Marquez ranked first in FP2, but his laptime (1’44.340) wasn’t enough to lead Friday standings, as Francesco Bagnaia had topped morning session by riding in 1’44.225. The championship leader fought hard to rank first in FP1 and finally he was fastest not just in that session, but also in FP1-FP2 combined classification.

Behind him, Marquez ranked second after being the best in the afternoon and he was one of the not many riders who improved their laptimes compared to FP1. Alex Marquez shared second place with Marcel Schrotter and Joan Mir, who had performed the same laptime as Marc’s brother in the morning. Great start of the weekend for Augusto Fernández, replacing Hector Barberá at Pons HP40 Team for this GP. The youngster from Mallorca performed one lap in 1’44.360 in FP1 and he ranked fifth in Friday standings followed by Fabio Quartararo (belonging to the group who went faster in FP2).

We also remark the comeback of Remy Gardner from his leg injury. The Tech3 rider finished Friday in 29th place. 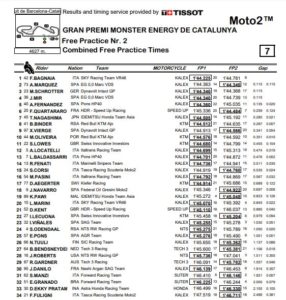