Most Important, MotoGP, Other categories
June 17, 2018 by Diana Tamantini
0

Pole position, fastest lap and first win: it was the perfect weekend for Fabio Quartararo, who took Speed Up to the middle spot of the podium three years after Sam Lowes (2015 Austin GP). Great performance from Miguel Oliveira, who ranked second after starting 17th. Alex Marquez closes the top 3.

Just before the warm-up lap, Sam Lowes went back to the pits due to a technical issue and this forced him to start from last position. At the start, Alex Marquez took the lead ahead of Marcel Schrotter. Amazing start from Oliveira, who went from 17th to 5th after just few corners. An early crash at Turn 4 involved Stefano Manzi, Bo Bendsneyder and Niki Tuuli.

Marquez remained first, followed by many riders fighting with each other: Schrotter lost second place due to a mistake at Turn 1 and so he was passed by both Quartararo and Oliveira, the latter overtaking also the Frenchman and Marquez. While Jorge Navarro, Joan Mir and Romano Fenati gave up the race due to falls, Quartararo overtook Oliveira and took the lead 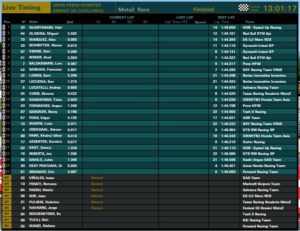