“Pecco” Bagnaia realized the best time of the round, ahead of rookie Joan Mir, Marcel Schrotter and Alex Marquez.

The last round of Free Practice this Friday ended with an unexpected turn of events: Sam Lowes seemed to register the best time, but it turned out he didn’t respect track’s boundaries. Francesco Bagnaia thanks him as he is now leading the ranking, ahead of rookie Joan Mir, Marcel Schrotter (still maintaining the best time of the day) and Alex Marquez (who fell during the final lap).

The round started and ended with Jorge Navarro’s falls as he slipped on Turn 13 during the first few minutes and then slipped again on the next Turn during the last lap. But accidents didn’t end here, as Mattia Pasini fell on Turn 5 right after registering the best temporary time. Stefano Manzi wasn’t luckier, as he also fell in the first half of the round. During this FP, the World Champion Bagnaia took the lead and managed to keep it despite some changes in the positions of the riders behind him. But riders continued to fall too, especially in the last few minutes when Miguel Oliveira slipped on Turn 4 and Alex Marquez did the same on Turn 14.

Sam Lowes made today’s reference time, but it had to be canceled as he went out of track’s boundaries and he is now 11th in the ranking. This way Francesco Bagnaia got the best position in the ranking, followed by rookie Joan Mir, Marcel Schrotter (best time of the day) and Alex Marquez. Simone Corsi got the 5th place ahead of his fellow countryman Mattia Pasini and of Miguel Oliveira; while the last positions in the top 10 went to first-timer Romano Fenati, Lorenzo Baldassarri and the local rider Fabio Quartararo. Here the other Italian positions: Andrea Locatelli finished 12th, Luca Marini 21st, Stefano Manzi 31st, and Federico Fuligni 33rd. 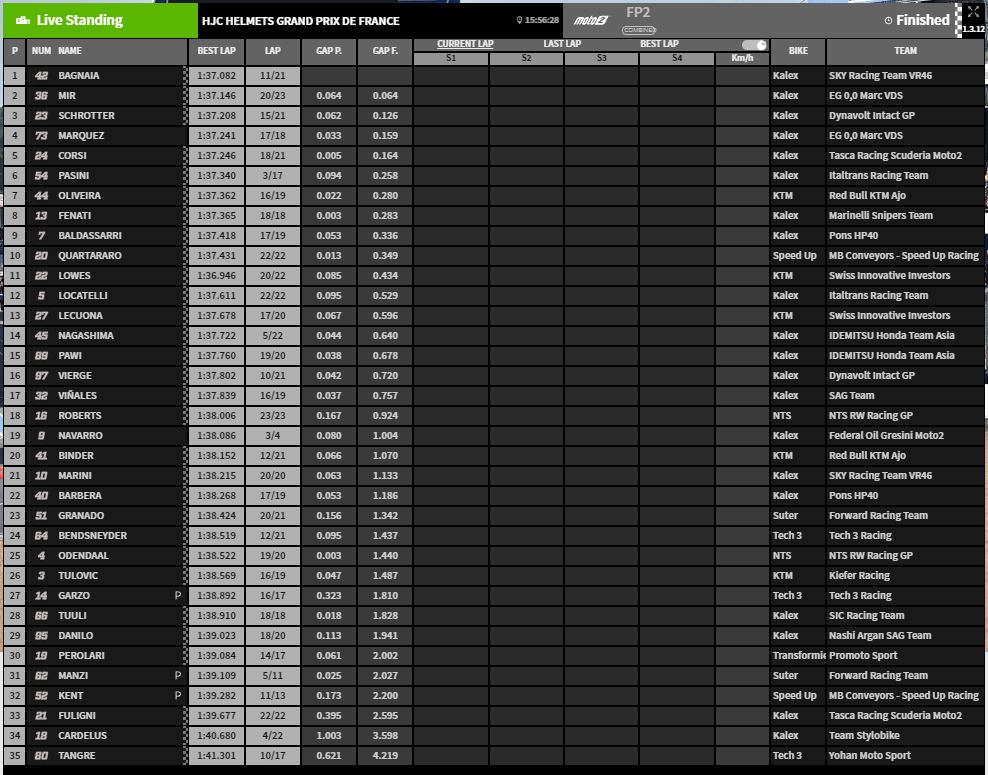