Francesco Bagnaia leaves his mark on qualifying in Misano, winning again the best position on the starting grid ahead of Schrötter and Pasini, while his closest rival Oliveira finished 9th.

This is the 3rd pole position in a row for Francesco Bagnaia, and the 4th of the season: the Sky Racing Team VR46 rider and current World Championship leader is the undiscussed leader of the ranking. He managed to conquer and maintain the 1st position from the very beginning until the chequered flag. Next to him on the starting grid, there will be Marcel Schrötter and Mattia Pasini, while Miguel Oliveira ended up 9th. The race will kick off tomorrow, Sunday 9th, at 12.20 PM.

From the beginning, all riders engaged in a fierce battle to gain the best positions at Misano Circuit. Unfortunately, Roberts and Kent fell almost immediately while Bagnaia was already taking the lead ahead of Schrötter and Pasini. Oliveira slipped on Turn Rio. Other riders fell too: Baldassarri (twice in a row), Tuuli (for the third time today), Gardner, and Aegerter.

Afterward, the ranking didn’t change much, and Francesco Bagnaia won the pole position again, followed by Marcel Schrötter and Mattia Pasini. Fabio Quartararo got the 4th place ahead of Brad Binder and Jorge Navarro. Luca Marini will be opening the third row together with Alex Marquez and Miguel Oliveira, while Joan Mir took up the last position in the top 10. 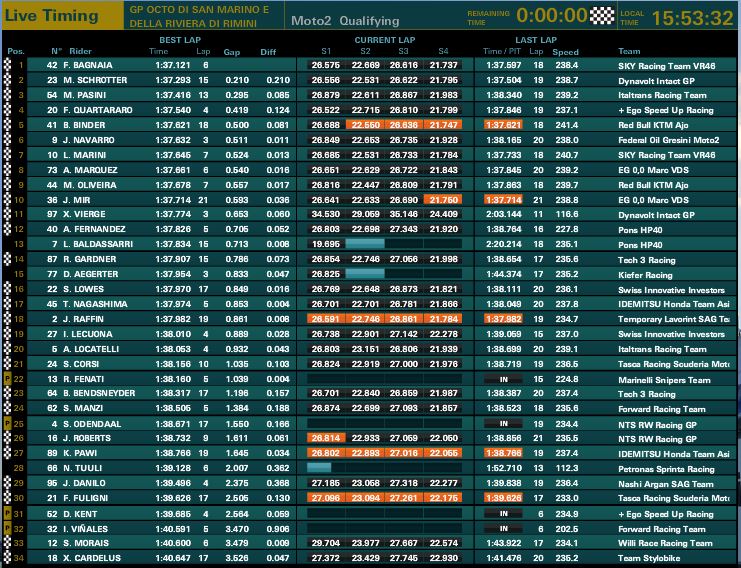