Francesco Bagnaia takes the lead and wins over Miguel Oliveira, 2nd. Marcel Schrötter steps on the podium for the first time with a good 3rd place.

The weekend in Misano has been an extremely successful one for Francesco Bagnaia: after he got the pole position, he also won the race at the Circuit of San Marino. This was definitely the expected conclusion as he had been dominating from the very beginning. Miguel Oliveira got the 2nd place (now he is just 8 points behind the leading Italian rider) after a harsh battle against Marcel Schrötter. But the latter can also celebrate this weekend as he stepped on the podium for the first time in the Moto2 World Championship. We also witnessed a dangerous and unfair maneuver by Romano Fenati against Stefano Manzi: the Italian rider deserved the black flag they gave him.

The first technical issues appeared as soon as the riders went to the starting grid for the warm-up round: Jesko Raffin, this time racing with SAG Team, had to start from the pit lane instead of the 17th place. Bagnaia and Schrötter kicked off amazingly, while Pasini immediately lost a position to Binder. Oliveira made a great start too, as he managed to climb up to the Italtrans rider from the 9th place. After a few turns, there was an accident between Fernandez and Marquez, with the forerunner of the Pons HP40 team hitting the rear of his fellow countryman: both riders managed to re-enter the competition, but their race was irreparably compromised. Kent slipped and, unfortunately, had to withdraw from the race.

Bagnaia immediately managed to set a very fast pace and ran away, Pasini followed 2nd while Oliveira and Schrötter started fighting for the 3rd position. Over time, they also managed to gain some ground and reached the Italian rider. Halfway through the race, Marini’s KALEX had some technical issues and the rider was forced to abandon the competition (apparently, something got stuck in between the tyre and the fender). Some time after, both Lowes and Manzi slipped. The rookie Fenati was disqualified for a crazy maneouver: the Italian rider went next to Manzi and pushed the brake on the bike of his fellow countryman, an incomprehensible and dangerous act that could have had disastrous consequences considering the high speed.

In the meanwhile, there’s no contest with Francesco Bagnaia. With his unmatchable performance, he is the clear-cut winner of the San Marino GP. The battle for the 2nd step on the podium was definitely more intense, as Miguel Oliveira only managed to overtake Marcel Schrötter toward the end of the race. Mattia Pasini finished 4th ahead of Joan Mir. Lorenzo Baldassarri got the 6th place, followed by Fabio Quartararo and Brad Binder. Jorge Navarro and Xavi Vierge filled the remaining two position in the top 10. 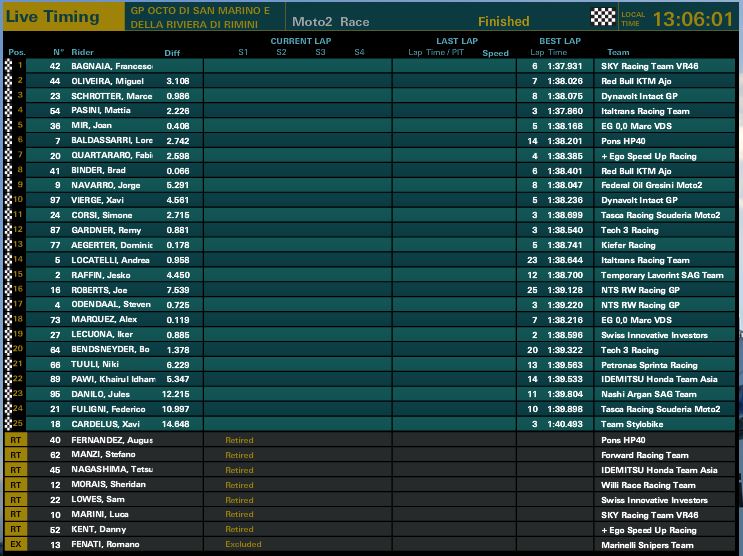