The Marc VDS team rookie Joan Mir takes the lead in the second round of FP, ahead of Sam Lowes and six Italian riders led by Francesco Bagnaia.

Estrella Galicia 0,0 Marc VDS leaves its mark on this first day at Mugello Circuit: Alex Marquez got the first position this morning and Joan Mir got it in the afternoon, the latter with the best absolute time of the day. 2nd place for Sam Lowes on KTM, followed by a group of six Italian riders led by the current World Championship leader Francesco Bagnaia, who finished with the third best time of the day.

Mattia Pasini started showing his speed from the first few seconds, realizing a great 1:52,265: the fastest round registered so far. Just behind him, there are Bagnaia, Marquez, and Locatelli, and the ranking remained stable for most of the second round of FP. Until the last few minutes, when some riders started to make quicker and quicker rounds, drastically changing the ranking.

In the end, it was rookie Joan Mir who managed to conquer the leading position, leaving Sam Lowes a tenth behind. After them, a group of six Italian riders arrived at the finish line of this FP2: Francesco Bagnaia, Mattia Pasini, Lorenzo Baldassarri, first-timer Romano Fenati, Luca Marini and Andrea Locatelli. The last two positions in the top ten belong to Fabio Quartararo and Alex Marquez. Here the rest of the Italian riders: Simone Corsi arrived 12th, Stefano Manzi 23rd, Federico Fuligni 31st. 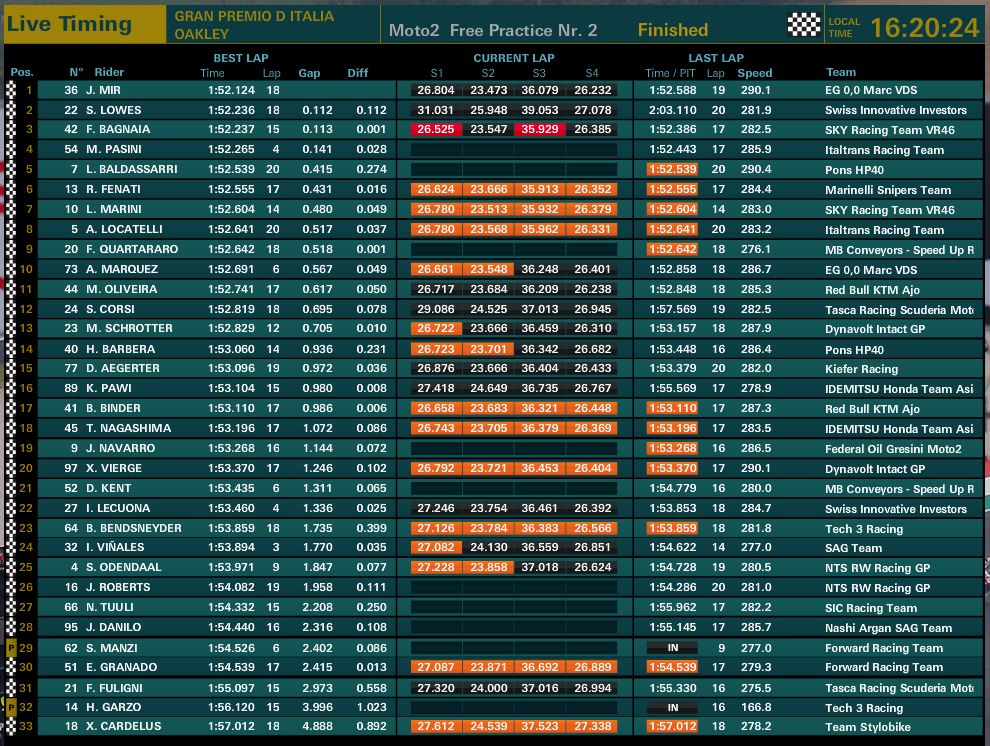 MotoGP, Mir furious with Miller and accuses: “He did it on purpose!”

MotoGP Qatar, what a joke for Joan Mir: “Two missiles passed me”

MotoGP, Joan Mir: “What’s wrong? We do not know”

MotoGP, Joan Mir and Suzuki, the defense of the world crown begins