The pole position on the German track goes to Mattia Pasini, who registered the best time at the beginning of the round and managed to maintain his position until the end. Luca Marini and Francesco Bagnaia will be with him in the front row.

An all-Italian front row for the German GP: Mattia Pasini conquered the pole position, making the best absolute time at Sachsenring; but Luca Marini (this is his best Qualifying in Moto2) and the current World Championship leader Francesco Bagnaia will be kicking off from the front row too. As usual, gaps were very short as 25 riders crossed the finish line in the space of less than 1 second. The Moto2 Race will start tomorrow at 12.20 .

Pasini took the lead of the ranking in just a few minutes, thanks to a best absolute time of 1:23.787 on the German track, a time that is 2 tenths quicker than the old record registered by Zarco. The ranking soon stabilized around an Italian trio who managed to gain and keep the best three positions in the ranking, with the two Sky Racing VR46 forerunners getting the 2nd and 3rd positions. Pawi slipped, luckily with no consequences.

There were no further changes in the Moto2 Qualifying ranking: Mattia Pasini will be Sachsenring’s poleman, ahead of his fellow countrymen Luca Marini and Francesco Bagnaia. Sam Lowes will be opening the second row, followed by Lorenzo Baldassarri and Xavi Vierge; while Alex Marquez and his teammate Joan Mir finished 7th and 8th, ahead of Marcel Schrötter and Brad Binder. 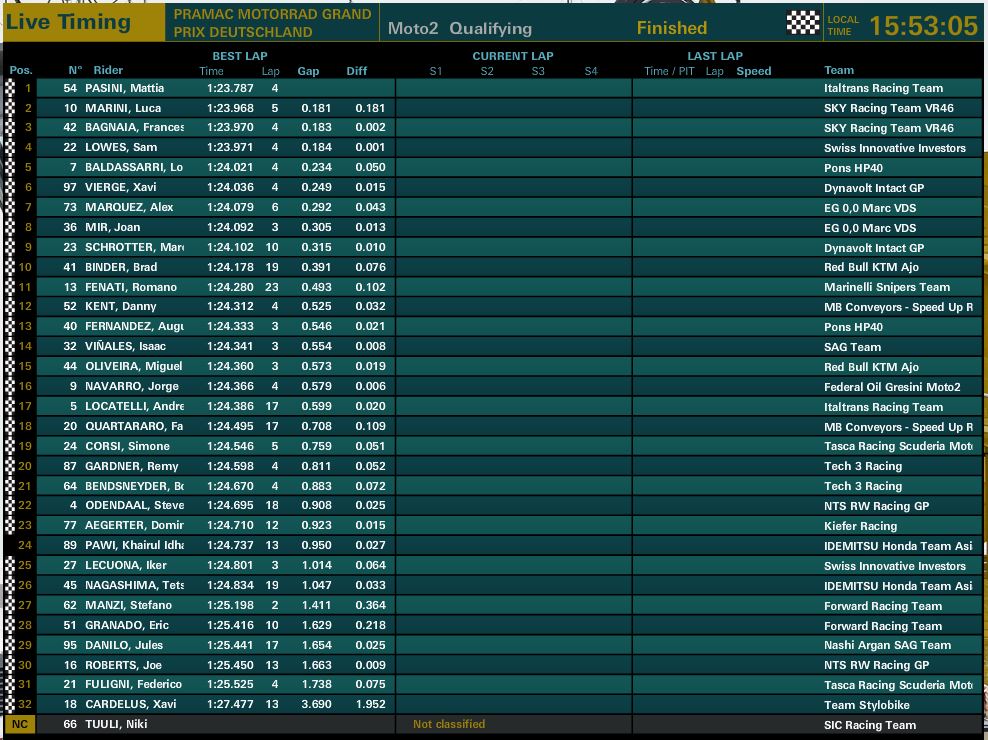 MotoGP, Luca Marini: “In Ducati we were shocked after my first laps”